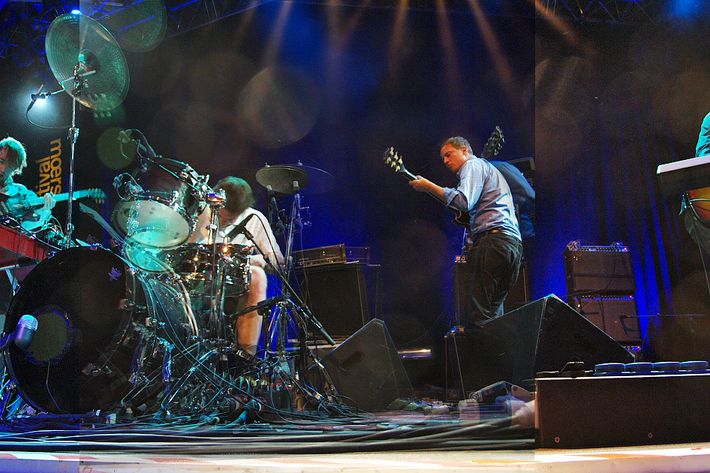 In 2007, Battles’ Mirrored — the Brooklyn instrumental-rock act’s brash, intricately constructed debut — blew minds. Four years later, the band has finally returned with Gloss Drop, a much brighter affair that is no less ambitious or startling than their first salvo. The process behind the album, as guitarist Dave Konopka told Vulture, was intense: Not only was the band adjusting to a whole new songwriting approach, but they also lost a member, Tyondai Braxton. Ahead of Gloss Drop’s release this week, Konopka took us inside that process, breaking down the construction of one track: the album’s epic finale, “Sundome.”

The Process
With Mirrored, we had songs fully written in the studio space. This time around it was more about going into the studio a little unprepared. The interesting part is that it allowed us to re-contextualize how we approach writing songs. We ended up having a lot of parts that we worked individually. We’d go into separate rooms in the studio, and then we’d come together in the control room with our producers, Keith [Zousa] and Seth [Manchester]. That became the planning room, where the songs really came into fruition. We started building songs in Logic, and it was like putting together a piece of a puzzle.

It was almost a reverse process of what Mirrored was. Jamming with your bandmates is like, “This is what I’m doing. What are you doing?” And [with Gloss Drop] it was, “Here are the parts.” And then it’s, “Okay, I like that, I don’t like that.” It’s antithetical to jamming, but the compromise is the essence of the collaboration. And at the same time, we were conscientious of making it sound like we’re playing this live. It’s easy to get caught up in making sterile parts when you’re alone. Once we got out of the studio, it was about learning the songs.

The Setup
We were trying to get material together for these Warp 20 [record label anniversary] shows in Japan, and “Sundome” was one of the first songs we worked out. It consisted [at that point] of a loop that I had recorded. The initial recording of it was good, but then I went back and experimented with breaking it up into different values of the octave spectrum, to kind of give it a little bit more space. That’s the part that kicks in at first, and it’s essentially the meat of the song. John [Stanier] was playing a pretty minimal beat, for what he normally does. John was adamant about having no drums [at first]. He pushes for a song without drums on each album, because he thinks it’s good to take a break. Very admirable. [Laughs.]

The Structure
We had considered making it a two-part song. It would have been two tracks on the actual album, in consecutive orders. The song as a whole, it’s very meandering and organic at the beginning, and then the two gears catch teeth, and you kind of take off from there. The B-side of our “Ice Cream” single is a song called “Black Sundome,” which split off from this song. We originally had three “Sundome”s. One became “Black Sundome,” and then we glued the first and the third “Sundome”s together. We called the first part “Sundome Madonna,” because the loop had this “Lucky Star” vibe to it. We had a bunch of ideas that we couldn’t make fit, and we didn’t want to write a sixteen-minute song. It was easily heading in that direction. So it took a little while to find its way, and then it became one of those “Hey Jude” builders. [Laughs.] But there’s definitely a common thread that ties the songs together. It’s not like we just glued some totally random shit at the beginning of a cohesive song; they complement each other really well.

The Vocals
We asked Eye from the Bordeoms for vocals. He’s in Osaka, so it was all via e-mail. We had the entire song completed and we sent him the song, and he kind of laid down this whole Über-crazy raw track. He just kind of went off. I remember when I first heard it on top of the song, the vocals were literally covering every space of the song. He was just like, “I’m totally giving you as much as I can, and totally edit it as you want.” My sister-in-law lives in Providence where the studio is and she’s Japanese, so we asked her to come and tell us what he was saying, so that we wouldn’t be cutting him off in the middle of a sentence. She starts listening and she says, “Uh, this isn’t Japanese. This is nothing.” [Laughs.] I knew that he makes up his own language sometimes, but the way that he repeated some of the patterns, it seemed really tricky not to be Japanese. But from there it made our job easier. Keith and Seth pitch shifted the vocals up and down, so it’s like this tri-chord harmony that he’s doing.

The Title
I play basketball with my friend Joel in Brooklyn every Monday, and one weekend these dudes showed up that were awesome. This one dude jumped over me and shit. I’m 35 years old; I can’t jump the way I used to jump when I was 17. I was like, “Those guys are good!” And Joel’s like, “Yeah, most of them play in a league during the summer. The league’s got a dope name; it’s called Sundome.” It seemed very appropriate. So I credit Joel for naming that song. It’s named after a Brooklyn basketball league.

Battles’ Dave Konopka Explains How the Band Puts a Song Together