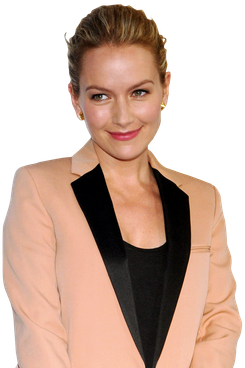 On her old show, Ugly Betty, Becki Newton was the pretty one. On her new show, the long-delayed Love Bites, she’s the pregnant one. The NBC series is an anthology rom-com in the vein of He’s Just Not That Into You or Valentine’s Day — a procession of loosely connected stories, anchored by a few core characters — that was supposed to be NBC’s big new show of last year. But it got delayed, management changed, Newton shot a pilot for CBS that didn’t get picked up, and now Bites has been burned off over the summer. We spoke with Newton, who is in Atlanta, hanging out on the slapstick set of a new Farrelly brothers movie, about how her real-life pregnancy impacted Love Bites, cheating on NBC with CBS, and where Michelle Trachtenberg goes wrong in tonight’s episode.

Annie was supposed to be a virgin. How was that going to play out, originally, before your pregnancy changed the course?
I don’t think that could have played out for long. There’s not a lot of room. It would have become all about who she’s going to lose her virginity to, and then when that happens, it would be over. We used some of that idea for Cassie [played by Krysten Ritter], who pretends she’s a virgin. But happily, my pregnancy opened up the character of Annie. And I was ginormous shooting that pilot, because we had to redo it. I was eight-and-a-half months pregnant; I was about to pop! And yet, Annie doesn’t think of herself as pregnant. “I’m not really a future mom. I can still date!” This of course gets her into these awkward, horrible situations. She’s the total opposite of what you think a pregnant woman is.

How will the show change once Annie gives birth?
You will see Annie have that baby — well, you won’t see it, but you will see the storyline conclude. And if there’s a second season, you’ll get to see how that changes Annie’s life. She thought it wasn’t a big deal to be her sister’s surrogate, but it gave her a purpose. And although she didn’t think she would, she now loves this baby. But this isn’t treated like a cliffhanger. That’s what’s unique about this series: The arcs are short enough and the scenes are long enough that nothing is ever left unresolved.

In the middle of all the drama that went down with the show — the cutback on the order of episodes, the mid-season bump — you signed on for a CBS pilot. To use a dating metaphor: Were you in an open relationship with NBC?
[Laughs] It is like dating other people.

Which could be great if that’s what you wanted, but also shows a lack a commitment on their part. Were you happy that you were free to pursue other shows or frustrated?
NBC allowed me to pursue other options because I think, at a certain point, they weren’t overly committed [to Love Bites]. I don’t know if frustrating was the right word for how I felt, but I’ve learned shows take many different routes to getting on air, and I can’t control the results. Everyone involved is very proud of our work on Love Bites, however it played out. We’re happy people. I know some people were frustrated, but I’ve learned I can’t control the results, no matter how hard I try. Before Ugly Betty, I was just doing commercial work the week before, and then suddenly the next week, I was on a pilot. Some shows just hit right away. Some don’t. All I can do is look for things that are fun and inspiring.

Michelle Trachtenberg is in tonight’s episode, and she makes banana bread for a guy, which freaks him out. Would it have scared him as much if she baked cookies?
I feel like when there are over five ingredients, it suggests commitment. Rice Krispies Treats would have been a better gift for someone you just started dating; those clearly don’t take a lot of time. Although I made bread for Chris [Diamantopoulos], and now he’s my husband. Michelle’s so funny in this, so we’re going to see more of her. She’s coming back.

You met your husband on the New York City subway? Usually when guys hit on you in the subway, it’s not cute, it’s creepy.
It could have been creepy and weird, and when my son gets older, I’m going to tell him, “Don’t talk to girls on the subway!” But Chris walked by, and we noticed each other at the same time, we were looking at each other in a way that was an invitation to talk, so we started chit-chatting. And years later, well …

What’s it like watching him on set as Moe in The Three Stooges?
With all the stunts, falls, and kicks, he’s coming home every day bruised and battered. When our son, who is six months old, first saw him in the wig, he was terrified! But then he quickly figured out it was his dad. [The baby] loves being on set. I just hold him, and Sofia Vergara comes over and makes him laugh. Everyone plays with him. And my son gets to watch the Stooges! I can’t think of a better way to entertain him. There’s just something about watching Moe poke Larry in the eye that never stops being funny.

Do you feel like you still have unfinished business with Ugly Betty?
I could have played Amanda until she was a 90-year-old receptionist. [Laughs] And she would still feel like she was a supermodel. Playing her was so much about the mannerisms. But Annie is a real person, and that was an adjustment. It took a while to let go of Amanda so I could play a normal person.

Love Bites’s Becki Newton on the Show’s Long Delay, Cheating on NBC, and Marrying a Stooge

sesame street 12:30 p.m.
Elmo Is Ready for (Not Too) Late Night  He even has a custom-made suit.
coronavirus 12:30 p.m.
The Best Movies to Watch in Quarantine, According to Famous Directors Want to disappear into a movie? We asked Luca Guadagnino, Claire Denis, Michael Mann, David Lynch, and more to recommend some escapist films.
By Vulture Editors
deaths 12:26 p.m.
Larry Kramer, AIDS Activist, Author, and Playwright, Is Dead at 84 Kramer was a crucial AIDS activist and dramatized the movement in The Normal Heart.
vulture lists 11:50 a.m.
All the Verzuz Instagram Live Battles, Ranked These weekly producer-songwriter battles have become our new appointment television.
By Craig Jenkins
tv 11:32 a.m.
Gabrielle Union Says Simon Cowell’s On-Set Smoking Gave Her Bronchitis “I ended up staying sick for two months straight.”
remembrances 11:08 a.m.
Fred Willard Was ‘One of the Good Guys’ Norman Lear, John Michael Higgins, and Bob Balaban remember the late comedian and actor.
vulture guides 10:30 a.m.
Which Streaming Service Do You Actually Want? Helping you navigate the many, many, many, many, many, many, many options out there.
friday night movie club 10:28 a.m.
Kiki’s Delivery Service Is a Perfect Fable for Lonely City Dwellers Studio Ghibli’s catalogue is finally available to stream on HBO Max. Celebrate with us this Friday by watching Miyazaki’s 1989 animated film first.
By Jackson McHenry
bachelor nation 10:23 a.m.
Will You Accept The Bachelor and Bachelorette on HBO Max? Many past seasons are finally available to stream.
the race to animate 10:00 a.m.
Every Studio Ghibli Film, Ranked The Japanese animation powerhouse has produced some of the best films ever made, and now they’re finally streaming on HBO Max.
By Brian Tallerico
art 9:27 a.m.
See New York Through the Eyes of Hockney, Warhol, and O’Keeffe A much-needed love letter to the city.
homecoming 9:10 a.m.
Homecoming’s Showrunners on the Art of Building a Conspiracy Thriller Without the guidepost of their popular podcast, but with the addition of Janelle Monáe, Homecoming crafts a brand-new mystery.
the streaming wars 9:00 a.m.
HBO Max Struts Into the Streaming Thunderdome Inside WarnerMedia’s multibillion-dollar bid to supersize HBO and transform it into a powerhouse capable of battling Netflix.
streaming 9:00 a.m.
Every Harry Potter Movie Apparates to HBO Max Accio film archive.
explainers 9:00 a.m.
So, How Do I Actually Get HBO Max? And what’s the difference between HBO Max, HBO Go, and HBO Now?
dance 8:30 a.m.
Where to Stream Great Dance Performances A little starter set for the enthusiast who wants to feel like leaping again.
lawsuits 8:25 a.m.
Disney, CBS, and Criminal Minds Execs Sued for Sexual Harassment on Set California authorities filed a sexual harassment and discrimination suit regarding the show’s longtime director of photography.
the longest lives 8:00 a.m.
‘Those Were Memorable Times. But I Don’t Want to Live There.’ Jazz musician Reggie Workman played with John Coltrane, won a Guggenheim at 82, and can’t wait to get back to rehearsal.
By Matt Stieb
finales 5:00 a.m.
Mrs. America Ends With a Loaded Ellipsis The takeaway may seem to be that Phyllis Schlafly won in the end, but “Reagan” argues just as strongly that this story isn’t over yet.
movies Yesterday at 11:00 p.m.
Tom Cruise and Elon Musk’s SpaceX Are On a Mission: To Shoot a Movie in Space Boy, to be a fly on the wall during that pitch meeting.
More Stories