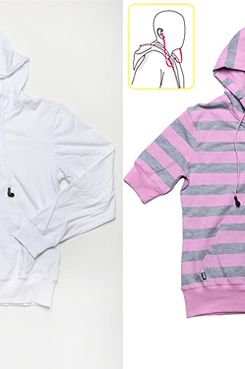 Bytes is back. This week, opportunities to be a digital D.J., a digital beat boxer, a frugal yet obsessive moviegoer, an obnoxious teenager, and an Air Guitar maestro.

For the past few weeks, all of Vulture Bytes’ start-up friends have been nattering on about Turntable.fm, yet another site that lets you stream music for free all day. We have Pandora; we have Grooveshark; we used to have Lala (may it rest in peace). Why do all these people think the world needs Turntable.fm? But then we tried it. Now we understand. Go to Turntable and you’ll join a room where people — including you — are playing D.J., deciding what to listen to. It’s a brilliant mash-up of Pandora and a chat room, except everybody gets to choose what’s playing, and nobody actually has to chat. Yes, there are questions of legality that come along with every new music site. But don’t let that spoil it for you. Parties can be fun even when the copyright cops are knocking at the door. PRICE: Free.
Vulture Bytes, like many overcompensating freshmen, once made fun of our school’s a cappella crowd. Why were these people willingly performing in a way that made their faces look like they were sucking on a Sour Patch Kid and having an orgasm at the same time? The beat boxers were always the most arresting, wiggling their eyebrows and covering a twelve-inch radius in spit. But now there’s Cambox, a way to do a cappella beat boxing without any collateral damage. The way it works: You (or your friends) record short messages using the phone. Those short messages are then clipped very short, so that every time you play them they’re really just quick bursts of percussion. CamBox lays them out on the screen, and you touch them in rhythm to create your beat. Maybe, like a cappella, it’s best to just watch it happen. It’ll make more sense then. PRICE: $1
HoodieBuddie is the ideal gift for the angsty 16-year-old nephew who clearly doesn’t want to be hanging out with you at the family BBQ this July 4. It’s a line of clothing that comes threaded with its own headphones. The headphones come in varying degrees of stealth: You can either get them embedded in a hoodie’s drawstrings, or awkwardly sprouting from a T-shirt’s collar. Vulture Bytes knows better than to try to understand modern-day teenagers, but this seems like something our younger self might have worn on a particularly self-absorbed day. Oh, and it’s machine-washable, so your nephew doesn’t have to worry that he’s going to ruin it in the wash. Not that he’s doing his own laundry. PRICE: Starts at $20 for T-shirts and $40 for hoodies.
Ronald Mannak and Colin Karpfinger would like you to forget Tap Tap Revenge ever happened. That iPhone game, one of the first to make the App Store seem like a place where companies could actually make money, was so simple in its gameplay — tap some buttons along with a song’s beat — that it got boring. Air Guitar Move, meanwhile, is part music game, part music generator, and it asks you to, well, move. It’s really just a guitar pick that connects into your iDevice and serves as an instrument as you play the Rock Band–style game on your phone. But it looks like more fun than Tap Tap Revenge ever was. It’s still a Kickstarter project, but Red Bull has donated $20,000 to the cause, so the picks are definitely going to get sent down the production line. Order now before Red Bull finds a way to make it painfully uncool. PRICE: $39.