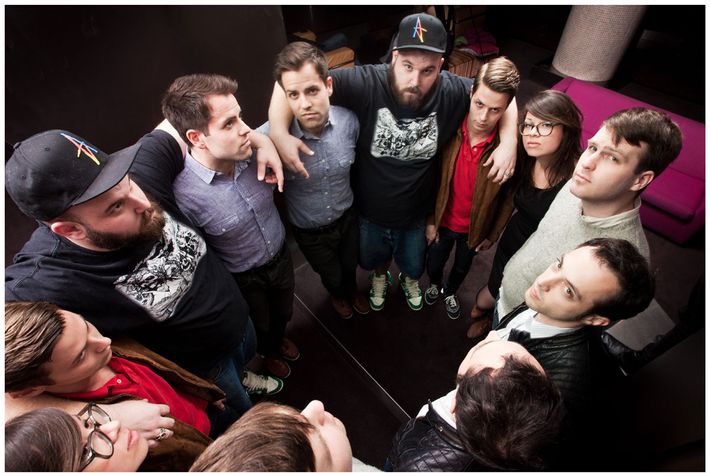 1. “Let Her Rest” (instrumental)
Abraham: The music was completely done by the time we got around to doing the narrative. It was structured in a way that certain songs would have natural positions, like a climactic scene or an epiphany scene. And then we sat down, with a book on Shakespearean structure and a Wikipedia entry on play structure, at the Dufferin Mall, a not-so-great mall near all our houses. It’s neutral territory: All our great summits when we’re not agreeing are held there to avoid bloodshed. Almost immediately we decided it should take place in the U.K. and that it should take place in a time that wasn’t our own, and that we wanted a love component to it and a social component to it. The late seventies, early eighties was perfect: all our obsession with anglophile music, and the history of DIY and punk culture, and the death of labor that was happening at the time, could be played with.

2. “Queen of Hearts”
Haliechuk: It introduces where David’s life is at: He’s one of these downtrodden, factory-working-type guys; he has no hope that things are going to change, that things are going to get better to him. And as it always does, magically, some beautiful woman falls in his lap and he falls in love with her immediately.
Abraham: It’s about these moments of elation we get when we enter a relationship, when all of a sudden we’re snapped out of the darkest periods. You’re working your day job, and the next day work just seems bearable. Like, Wow, I can do this. Specifically, it’s about meeting someone who awakens a different something out of you, that first relationship that you have with someone cooler than you.

3. “Under My Nose”
Abraham: Specifically, this is about when I met my wife. It’s how about every moment we’ve lived, all the failed relationships: It’s all been worth it. We’d actually met years and years before [we dated]: Me and my friends used to be quite mean, and we used to make fun of her friends and her band and things like that. I realize now in retrospect it was a very adolescent way to show my affection. Years later she started coming into the video store that I worked at, and we started dating shortly after that. It just felt so perfectly juvenile and romantic and everything.
Haliechuck: David, though, is a character who is very negative. He’s experiencing all this good stuff with Veronica, but he’s always worried that something bad is on the horizon. The happiness is tinged with worry.

4. “The Other Shoe”
Haliechuck: And then the next song, things start to go wrong for him. It’s set to ruin; he can’t get over the dread that some bad thing is going to happen. Things are getting dark for him. The refrain is “we’re dying on the inside.”
Abraham: You wait for it all to fall apart in front of you, and it has to. You just have to brace for that; you can’t let it control your life — which is what, unfortunately, David does in the records. And all these songs can also be about falling in love with a subculture, or a politician. You have these periods that are so amazing, and then you see the flaws. I’ve seen it happen time and time again. Like any rapper says, “That’s the realest shit I ever wrote.”

5. “Turn the Season”
Haliechuck: The narrator is telling the audience that the previous song is true, you can’t have light without dark. And, at the end of the song, Veronica dies. We don’t explain what happens — we didn’t want the song to be pure narrative. Then it’d be a weird opera. It’s more about how they feel about these things that are happening.

6. “Running on Nothing”
Haliechuck: He feels terrible. He wonders why he spent any time on love, on another person. He thinks that it was all a waste. She’s gone, and he wasted all this time and emotion on her. He starts to give up.

7. “Remember My Name”
Haliechuck: That’s the narrator telling us: David’s right. He shouldn’t have spent any time on love. It’s better not to have those things then to have them and lose them. You’re set up for disappointment.

8. “A Slanted Tone”
Haliechuck: We introduce a new character, this woman Vivian who David has a history with. The story is coming from her perspective, and she’s telling us that you can’t always trust narration. She understands something about the narrator that no one understands yet.

9. “Serve Me Right”
Haliechuck: This is the narrator really bearing down into David now, saying not only that he’d be better off without love but that maybe the death of Veronica was David’s fault in the first place. And David is delivering this sarcastic soliloquy. He’s saying “maybe it was my fault, maybe I don’t deserve to be upset about it.”

10. “Truth I Know”
Haliechuck: The narrator now knows that the truth is out about him: He’s not just a passive narrator of the story, he’s got his own motivations. Now he’s making a plea to the audience.
Abraham: This is about the narrator, Octavius, trying to justify his role of being the narrator, and it’s indefensible. I certainly have been in this position many times. As a younger child, I certainly was a little more angry. A lot of anger came from insecurity, but it also came from this sort of cool, detached mentality: Straight edge means I’m better than you; punk rock means I’m better than you. As I’ve grown up, I look back upon it and realize that’s ridiculous.

11. “Life in Paper”
Haliechuck: This is David shooting back. He’s realizing that they’re all characters, and it’s not fair that one guy — the narrator, the figure of authority — gets to have control over the device.

12. “Ship of Fools”
Haliechuck: A classic side story. David and Octavius are personified by these two characters that are having a brawl. It’s two characters, sparring. You know, David and Goliath. And David comes out even worse.
Abraham: I see myself in all of these characters. Well, maybe not Veronica because she’s an idealized vision of perfectness. But Octavius, I have a lot of negative characteristics in common with. I’m vindictive; I’m jealous.

13. “A Little Death”
Haliechuck: David feels worse now. He’s lost; his whole world has been transformed. He doesn’t know what’s true. He doesn’t have any objectivity. He feels really depressed and is ready to throw it all away.

14. “I Was There”
Haliechuck: Vivian is telling exactly what happened at the moment of Veronica’s death. She’s saying she was there to witness the event, but also that she’s gone through this loss. You learn that Veronica died in a bomb blast. And at the end she’s condemned Octavius for being responsible for the death of Veronica.

15. “Inside a Frame”
Abraham: This is Octavius finally accepting what he’s done was wrong. He’s also realizing he’s done what he was fated to do, and so there’s still reluctant acceptance.
Haliechuck: At this point, all the characters are realizing they’re characters in a play. They don’t have free will. Octavius has been cast as the villain, but at the same time he’s been cast, so it’s not necessarily his fault. He’s saying he’s not as guilty as anyone else: He was just doing his job.

17. “One More Night”
Haliechuck: Veronica comes back — I guess as a spirit or something — and they have some words. David says good-bye one last time, and he realizes that Vivian is right: that time with Veronica was worthwhile.

18. “Lights Go Up”
Haliechuck: David’s now an older person. He’s glad it happened and he wants to do it again. David goes back to the factory, and it’s a second chance. He’s learned what he needs to learn; he’s glad with his experiences. And he goes back and gets to live it again. The record sort of resets.

survey says 3 mins ago
What Do Comedians Think of (the Non-Joke Parts of) Stand-up Specials? Here are insights from 39 of them.
By Hershal Pandya
explainers 8 mins ago
The Bullying Allegations at the Center of HYBE’s Next Big K-Pop Group, Explained After Korean forums accused Kim Garam of bullying, the internet was aflame.
overnights 4:12 p.m.
Stranger Things Recap: The Shire Is on Fire We (mostly) love Steve getting his big hero moment in the penultimate episode of Volume 1.
follow friday 4:06 p.m.
Michael Bonfiglio Wants to Tell You a Story We chatted with the director about the art of the stand-up comedy special — and, naturally, hummingbirds.
now streaming 4:00 p.m.
What’s Leaving Netflix: June 2022 Lady Bird, Criminal Minds, My Fair Lady, and more.
overnights 2:47 p.m.
Obi-Wan Kenobi Recap: Second Chances What feels a bit like Taken in space pivots to “John Wick: Chapter 2 in space” territory — and it works!
still learning 1:58 p.m.
Isaiah Rashad Comes Out as ‘Sexually Fluid’ in First Interview About Sex Tape “I’m not in full control of, when I walk into a room, of who I’m attracted to,” he told Joe Budden.
overnights 1:31 p.m.
Stranger Things Recap: This Old House We get a little haunted-house movie in the middle of Stranger Things!
courthouse chaos 1:30 p.m.
Johnny Depp Fans Are Out in Full Force As Trial Nears End When the clock hit 12:50 a.m. Friday, bedlam unfolded outside the Fairfax, Virginia, court parking garage.
summer preview 1:11 p.m.
What Will Be the Biggest Movie of the Summer? Vulture bets on five films that will break through the hottest months of 2022, in whatever ways they can.
By
summer preview 1:00 p.m.
10 Podcasts We Can’t Wait to Listen to This Summer From a new season of Slow Burn on Roe v. Wade to a “surf-rock audio drama” from a rising star.
in memoriam 12:57 p.m.
10 Essential Ray Liotta Performances From “mesmerizing newcomer” to legendary tough guy, Ray Liotta was magnetic onscreen.
hunter's line reading 12:53 p.m.
This One Ray Liotta Line Plays on a Loop in My Head The late actor’s performances operate on the edge of ravenous and resigned, but he’s almost pious in his line reading as a shark of a divorce lawyer.
By Hunter Harris
overnights 12:38 p.m.
Top Chef Recap: Tucson Time After studying the culture and traditions of Tucson, the chefs are focused and ready to push through the few remaining obstacles.
movie review 12:36 p.m.
The Comfortable Familiarity of The Bob’s Burgers Movie If you accept the narrative’s rigidity and safety, The Bob’s Burgers Movie is a jubilant bit of distraction.
overnights 12:22 p.m.
Grey’s Anatomy Season-Finale Recap: Hail to the Chief Grey’s makes the most of its 400-episode history with a finale that resets the game while paying homage to the past in some moving ways.
chat room 12:05 p.m.
Laura Haddock Was Gently Hazed While Filming Downton Abbey: A New Era Confirmed: A certain Crawley is a “cheeky monkey.”
vulture 10x10 12:00 p.m.
The Mustache Puzzle 1-Across, Four Letters: Song danced to with flailing arms.
scooby dooby doo 11:43 a.m.
I Ate All the Lyrics of Harry’s House Sure, the new Harry Styles album sounds really good, but how does it taste?
labor struggles 11:24 a.m.
How Was This Harry Styles Music Video Only $300? Was anybody paid?!
More Stories