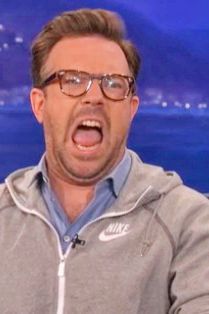 Last week, I took a break from critiquing Off–Off Broadway plays about naked hip-hop Serbo lesbian forest children struggling with father issues and consumerism to interview actor-comedian Jason Sudeikis, star of Saturday Night Live and the upcoming Horrible Bosses, for a New York Magazine profile. Sudeikis, who had been doing Bosses junkets for a week or so, bouncing between hotel suites and backlot roundtables, wanted to conduct the interview in some interesting location to break up the monotony. He suggested reflexology, the popular homeopathy involving intense, Qi-targeted foot massage and (if you’re the recipient) a lot of yelping. I’m more accustomed to subjects turning down my high-concept interview pitches, so I was happy to come to Chinatown, kick off my Wingtips, and get my arches brutalized in a recliner alongside comedy’s ascendant leading dude.

Over the course of our 40-minute, occasionally pain-dazed interview, we decided to develop this whole side-by-side sole-bruising stunt into a talk-show format, with guests answering boilerplate questions about one’s upcoming film while having their metatarsals systematically pried out of their feet by “specialists.” Sudeikis — Edison to my Tesla, Wordsworth to my Coleridge, Zuckerberg to my Winklevi — promised me crazy royalties on this eminently monetizable notion. I fully expected to quit this job within the week — or before someone made me review Spider-Man again, whichever came first.

Imagine my shock, then, when I saw J-Suds guesting on Conan last night. O’Brien asked him a textbook interview question about what it was like working with Kevin Spacey … all while trained reflexologists worked their toes while both of them giggled like schoolgirls. (Actually, in Conan’s case, it was more shrieking and groaning like a schoolgirl in an Eli Roth movie.)

Imagine my shock! Is my shock difficult to imagine? That’s because there actually was none. Imagine this instead: His publicist very sweetly calling me 48 hours in advance and asking permission for Jason to use the reflexology anecdote during his Conan appearance. Since it was all his idea in the first place, I happily acquiesced. (Honestly, I was surprised and impressed that they even asked. There aren’t many celebrities left who respect the prehistoric concept of “exclusivity.”) On the show, Sudeikis (known far and wide for his personable charm and classy, politic grace) was conscientious enough to name-check me and the mag, and he also did some spot-on impressions of my more agonized facial expressions. “He really got your face just right,” said my fiancée, a little wistfully, I think. The expression on her face has me wondering how often I make those faces, and in what situations. I clearly need to spend at least as much time as Jason Sudeikis has refining impressions of myself.

Totaling up: I’ve yet to see dollar one in royalties. On the other hand, I now join the likes of Joe Biden and Taylor Hicks in the Suds Gallery of impressions, and the world is officially overprepped for my brief Sudeikis profile (on stands next week). In addition, my feet have never felt better, my toes have never looked more uniform, and I can rest easy knowing that Conan O’Brien’s capacity for podial agony is far below mine — information that will surely come in handy in our fast-approaching postapocalyptic torture-based economy. Thank you, Jason Sudeikis.

humbled 4 mins ago
John Krasinki’s Kids Think He’s Just Some Guy Who works in an actual office, and whom Emily Blunt married “out of charity.”
overnights Yesterday at 11:05 p.m.
We’re Here Recap: ‘And I Am Telling You I Am Not Going’ A stop in Jackson, Mississippi, yields oceans of tears and a standout performance.
bye twitter Yesterday at 10:36 p.m.
All the Celebs Who Left Twitter “This place is a mess.”
her man her man her man Yesterday at 10:18 p.m.
Cher Knows Her New Relationship Might Seem ‘Kind of Ridiculous’ She’s 40 years older than her “fabulous” new boyfriend, Alexander Edwards.
never again Yesterday at 8:17 p.m.
Hellboy Taught David Harbour ‘Not to F— With’ Beloved IP A hell of a lesson.
tributes Yesterday at 6:45 p.m.
The Music Industry Mourns Fleetwood Mac’s Christine McVie Even Bill Clinton said goodbye to the Songbird.
gma3 goss: what you need to know Yesterday at 6:23 p.m.
Sorry, Were We Interrupting Something on GMA3? T.J. Holmes and Amy Robach were a giggly duo of hosts for the first time since news of their relationship broke.
villainous behavior Yesterday at 6:03 p.m.
Los Espookys Canceled by HBO, Enemies of the Moon HBO needs to sit in the corner and think about what they’ve done.
oscar futures Yesterday at 5:37 p.m.
Oscar Futures: Is the Academy Ready to Forgive Will Smith? He’s banned from the ceremony for the next ten years, but could Will Smith nab a nomination for Emancipation anyway?
By Nate Jones
tributes Yesterday at 5:07 p.m.
Takeoff’s First Posthumous Verse Appears on Metro Boomin’s New Album Alongside A$AP Rocky on “Feel the Fiyaaaah”
power rankings Yesterday at 4:46 p.m.
The Final Survivor Season-43 Power Ranking A last look at who is in the best position to win it all.
vulture lists Yesterday at 4:30 p.m.
A Ranked Guide to John Wick–Inspired Movies Evaluating the latest generation of stunt-heavy, fist-fighting action movies, including this weekend’s Violent Night.
follow friday Yesterday at 4:20 p.m.
Brian Robert Jones Has a Root Canal After This We chatted with the musician about being a rough hang, boy bands, and Caleb Hearon.
delectable Yesterday at 4:18 p.m.
Hollywood Couldn’t Risk Making a Movie Like Bones and All Luca Guadagnino knew Hollywood didn’t have the requisite taste for flesh. So to finance his first American-set movie, he turned to an Italian backer.
masters of press Yesterday at 3:41 p.m.
Keke Palmer’s Nope Press Tour Deserves an Archive She does her Angela Bassett impression … with Angela Bassett!
theater review Yesterday at 2:45 p.m.
Ain’t No Mo’ Takes a Jubilantly Unrespectable Flight to Broadway Jordan E. Cooper’s satire doesn’t button up in a bigger venue.
now streaming Yesterday at 2:42 p.m.
The 5 Best New Movies and TV Shows to Watch This Weekend Let Matt Rogers and David Harbour usher in your holiday season.
fandom Yesterday at 2:35 p.m.
No, That Wasn’t Danny DeVito You Just Saw at a Party in Bushwick Just hundreds of semi-bald lookalikes.
vulture lists Yesterday at 2:26 p.m.
The Most Horrific Twilight Character Backstories, Ranked by Absurdity You only get a glimpse of Stephanie Meyer’s twisted mind in the movies, but the books really let the freak flag fly.
ho ho ho Yesterday at 2:18 p.m.
Sexy Santas, Ranked There’s something about that twinkle in his eye …
More Stories