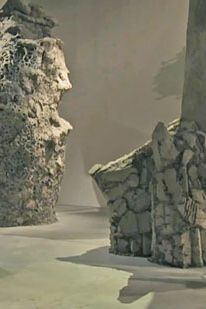 At Venice’s enormous, city-filling Biennale art exhibition, there are about 90 national pavilions, in which each country selects one or more artists to exhibit their work. In addition to these, there were more gypsy shows than could be counted. I did not see everything: I was at this art Woodstock for four days, but paid my own way, which meant no expensive water taxis to take me way the hell out to some island show in the lagoon. So while I’m sure I “missed the one thing that should have been seen in Venice” (which is what everyone at the airport kept saying as I prepared to board the plane home), I did see some riveting things, some revolting ones, and everything in between. Here are my five personal favorite pavilions and my three least favorite.

A surprising turn. This young artist created a series of giant archeological columns that seem to come from 10 million years in the future — or might be the last sculptures on earth. His spatial dwarfing, mudlike construction techniques, imagination, scale, and notions of history unfolding, out of control, all made me look forward to seeing more from this 31-year-old.
An installation of pastel-colored shapes made of soap, paper, and clay mixed with Vaseline and Venetian marble dust. Dirt on the floor creates paths; one comes away with the feeling of an artist in sweet control of a sensitive touch and on her own.
An enormous, labyrinthine, multi-roomed installation that conjures working-class Istanbul and a mad photographer’s darkroom. Nelson’s brand of hyper-realism isn’t to my taste — to me, it’s a series of stage sets gone bananas — but he wowed crowds and took people on some sort of journey to an inner Orientalism of the Mind. So I will bow in this case, without resentment, to the crowd. Photo: CRISTIANO CORTE/CRISTIANO CORTE
Hirschhorn’s full-on, all-out building-filling installation involves mannequins, aluminum foil, gruesome war pictures, and broken bottles. It’s a true overload, a fabulist fortress of shame, solitude, fury, resolve, and artistic/political ambition. My personal favorite, even when it veers toward the didactic and goes over-the-top. Photo: FILIPPO MONTEFORTE/2011 AFP
The three videos in this pavilion take the premise that the Jews of the world have right of return to Poland, where they may build settlements. They’re too HBO-slick and overlong by half, but the gripping idea behind them sticks in the mind — even if it would start another world war.
Christian Boltanski’s overblown printing-press contraption whirs at breakneck speed, producing black-and-white baby pictures: It’s Festivalism — art made for events like this, and nothing more — at its most bloated, bland, and pointless. I’m continually baffled by how beloved Boltanski is by the Curatorati. Indeed, I ran into two megacurators in Venice (a former documenta curator and a major London museum director) who said to me, “Boltanski is good, right?” I replied, “You two have been trying to tell me Boltanski is great for twenty years.” He’s not. Photo: FILIPPO MONTEFORTE/2011 AFP
Far worse than Boltanski’s merely bad art is Vittorio Sgarbi’s malevolent bad-faith, art-hating arrogance in the ugliest contemporary-art exhibition that I have ever seen. ArtInfo identifies Mr. Sgarbi, a politician, writer, and collector, as “the Glenn Beck of the Italian art world,” and indeed there is a kind of paranoid madness present here. His pavilion is an unmitigated visual onslaught installed on walls and curving shelving units. It’s almost all academic kitsch, bad figure painting, or anything the curator imagines as anti-avant-garde. Being reactionary is nothing new, but this is extraordinarily bad. The New York Times (in a review that, full disclosure, was by my wife) called the show “unredeemable” and a “national scandal.” Is there anything good about this cattle call? Perhaps only that it won’t be surpassed anytime soon.
I’ve already written about this super-hip artistic duo’s gargantuan encapsulation of the Ugly American via tank and treadmill. Had I been the curator, however, I would have tried to stop them there, because everything else they’ve done inside their pavilion is obvious, redundant, or silly. The first work you see inside the door is a black-painted, seven-and-a-half-foot replica of the Statue of Freedom (also known as Armed Freedom), the bronze sculpture that has stood atop the U.S. Capitol dome since 1863 — but here it rests prone on a tanning bed. Perhaps meant to evoke a president lying in state, it is so visually dead, pedantic, and simplistic that I think it may not even be art. Further along, actual Olympic athletes perform on a set of wooden replicas of business-class airline seats, and in the end it’s just pointless and ugly. The ginormous racket-producing tank spectacle outside is more than enough. It may be drop-dead obvious and may be the most expensive thing one could imagine lugging to Venice, but as one of the more obnoxious national acts ever executed at a Biennale — making American art spill over, dominate, and colonize the space outside the building — it serves as an enticingly odious metaphor for our recent wars and “freedom agenda.” The only thing that could be more poignantly odious (in my Jewish mind) would be to have artists from the Israeli Pavilion located two feet away build a settlement here. Then they could have refused to remove it, citing some ancient literary text. Photo: FILIPPO MONTEFORTE/2011 AFP

Jerry Saltz’s Best and Worst of the Venice Biennale

overnights 14 mins ago
The Real Housewives of Salt Lake City Recap: Charcuterie Overboard People in glass houses shouldn’t throw shoes.
autopsy 8:13 p.m.
Anne Heche Wasn’t Drunk or High During Car Crash, Coroner Says Her official cause of death has been determined to be inhalation and thermal injuries.
let's go party 5:52 p.m.
Greta Gerwig’s Barbie World Keeps Getting Bigger Ken we talk about Ryan Gosling for a sec?
boston voice: wicked! 5:49 p.m.
Thank Goodness, the Wicked Movies Are on the Way What is this feeling? Oh, yeah, excitement.
alien superstar 4:52 p.m.
Avatar 2 Will Show Us the Way of the Weeknd His song for The Way of Water soundtrack drops December 15.
news from shondaland 3:29 p.m.
Grey’s Anatomy Scammer Elisabeth Finch Wants to Write on Handmaid’s Tale Next After admitting she “never had any form of cancer.”
buzz! buzz! 3:04 p.m.
It’s Almost Yellowjackets Season Citizen detectives, there’ll be a break in the case on March 24.
1.5x speed 2:17 p.m.
Bad Men, Weird L.A., and 8 More Podcasts Worth Checking Out Welcome to the Night Vale team’s latest world.
dolls kill 2:09 p.m.
Robot Renesmee Hits Some Choreo in M3gan Bolstered by her viral success, M3gan is coming for your necks, your wigs, and an innocent old woman.
gma3 goss: what you need to know 2:08 p.m.
Every Detail of T.J. Holmes and Amy Robach’s GMA3 Drama in Chronological Order There has been an embarrassment (and we do mean that word) of detail.
sundance 2023 1:01 p.m.
Cat Person Has a Date at Sundance Film Festival 2023 As part of the lineup for the in-person and online programs.
real boys 1:00 p.m.
Pinocchios, Ranked What is it about this little wooden boy that’s resonated for 150 years?
my single is dropping 12:23 p.m.
Did You Know That There’s a Lana Del Rey Album Coming Next March? Did you know that there’s a tunnel under Ocean Blvd features Bleachers, Father John Misty, and her pastor.
vulture 10x10 12:08 p.m.
The Memory Puzzle 9-Across, Nine Letters: Clarice Starling and Gracie Hart.
best of 2022 11:30 a.m.
The Best Songs of 2022 This year’s music provided a fleeting and desperately needed moment of salvation.
broadway bye-byes 11:26 a.m.
KPOP to Close on Broadway Two Weeks After Opening The final performance will feature a panel on AAPI representation on Broadway.
snl 11:03 a.m.
Jerry Minor’s Ride From Flint to Mr. Show, SNL, and Beyond The actor and comedian reflects on his very long and very busy comedy career.
By Andy Hoglund
pcas 2022 11:00 a.m.
Shania Twain’s People’s Choice Awards Medley Did Impress Us Much With ample sparkles, cowgirl dancers, and a jab at Ryan Reynolds.
remembrance 10:52 a.m.
Bob McGrath Set the Example For 47 years, the Sesame Street actor radiated the warmth and acceptance many young viewers would’ve never received otherwise.
By Matt Zoller Seitz
best of 2022 9:00 a.m.
The Best Albums of 2022 The question of how to find peace hung heavily over the year’s most impactful records.
By Craig Jenkins
More Stories