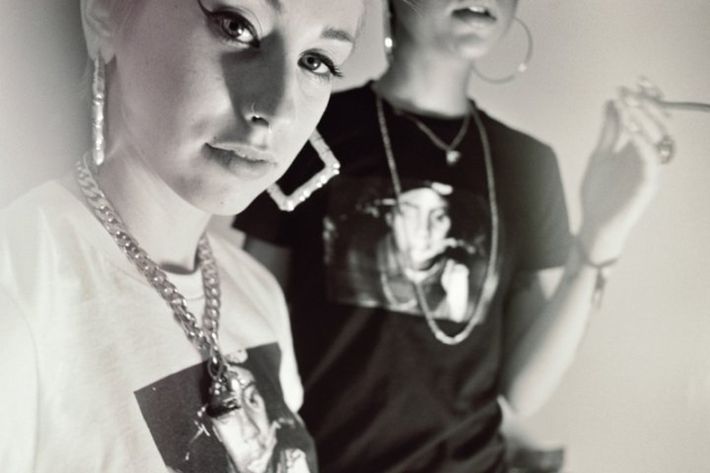 Just over a month ago, the 21-year-old California rapper Kreayshawn posted the video for her song “Gucci Gucci” to YouTube. It’s an ingratiating, summery knock on designer labels, and there’s something distinctly charming about the image of Kreayshawn strolling around L.A. in a Minnie Mouse headband performing it. Within a week or two, the song went highly viral, eventually reaching 3 million views; another week and voilà, she’d signed a deal with Columbia.

So at noon last Friday, Kreayshawn was sitting in a Columbia Records artists’ lounge in New York, under photos of Sinatra, Dylan, and Streisand, answering questions for the website AllHipHop.com. The label’s employees periodically assured her that the lunch she’d asked for was on its way. She’d been doing press for eight hours a day (Complex, XXL, Vice, MTV), explaining her background (Oakland native, high-school and film-school dropout, made videos for Bay Area rappers like Lil B, has plenty more music ready to release) with occasional breaks to zone out with her cell phone. By the end of the week, she’d somehow wound up with two talking points that needed to be carefully addressed whenever possible.

The boring one: Nicki Minaj. In an interview with Complex, Kreayshawn offered what you might call a close critical reading of her fellow rapper’s aesthetic (“when it comes to inspiring young women, her message is to be a Barbie — to be plastic, to be fake”), leading to Internet headlines of the KREAYSHAWN DISSES MINAJ variety. Beef! “I was just explaining the differences between us,” she tells the interviewer. She stresses her respect for Minaj, and closes by smiling and saying, “Hey, I’d lick her up and down.” I’m 95 percent certain I watched an interview last night in which she used the same phrase to answer this question. Promoting an artist is like a political campaign that way.

The interesting talking point concerns a word beginning with the letter N that white rappers like Kreayshawn aren’t supposed to use.

“I never said that in my music,” she says. But wasn’t there a video on her YouTube channel where someone did? “It might have been my sister, V-Nasty,” she says. “She says it all the time, and that’s because she grew up all different. She goes in and out of jail for armed robbery all the time. Her mom calls her that. But personally, I don’t say it in my music, because it’s not my place.”

It’s only once the AllHipHop.com camera is turned off that a real discussion begins. This one’s prompted by Kreayshawn’s manager, Chioke “Stretch” McCoy, who is very tall, immensely likable, and black. Like Kreayshawn, he’s from Oakland and has managed some of the area’s top rappers, like J. Stalin and Mistah FAB. (Kreayshawn met him while directing a video for DB tha General and says he was the one who encouraged her to give her own music a serious shot.) Stretch starts explaining the same thing that several people from Oakland will be telling me today: Things are just a little different there. “‘Nigga’ has never been an issue to anyone in the Bay Area.” People of all races call each other that, and feel a little strange when they leave the area and remember that it bugs other people out. Etc. You nearly get the sense that folks from Oakland view the rest of the country’s racial sensitivities the way Europeans view Americans’ attitudes toward sexuality.

Having to account for Kreayshawn’s associate, V-Nasty, seems particularly amusing to Stretch. “She’s from the hood,” he says. “She has 35th Project tattoos; she’s been to jail a lot. In the Bay Area, they don’t look at her as the white girl, they look at her as the homegirl, because everybody’s been born and raised together. You don’t know how it looks until you go elsewhere. The Internet puts it out there and says ‘racial slurs.’ But her mom is black — the woman that raised her is black — and she calls her ‘nigga.’ As in, ‘nigga, get your ass back in the house.’” He points to Kreayshawn. “But she doesn’t use it.” Then he pauses and makes a joke: “Because of people like y’all!”

“I told V-Nasty,” says Kreayshawn, “I always get this question, and it’s burning me! And she was like, ‘I ain’t gonna stop saying it, they ain’t gonna change me.’”

Which is an interesting reaction in the context of much Internet writing that accuses Kreayshawn and company of a calculating and inauthentic appropriation of black culture — that at least one person involved would apparently feel more inauthentic if she spoke any other way. Stretch has plenty more to say on this topic across the length of the day, but the main thrust is an eloquent case that people pay too much attention to racial lines and not enough to the environments people come out of. “I think that’s where America is going — it doesn’t really matter about race anymore, it’s about class. We have a black president, and then we still have people talking about ‘acting black.’ It just shows you how far behind everyone is. Everyone’s a product of their environment.” (And the environment in hip-hop might be a little vexed on this front: “There’s never been a time in history when popular culture has just fed people a word, over and over, and then told them not to use it.”)

Kreayshawn’s truly tiny; she’s wearing a half-T-shirt, a half-vest, and what you’d have to describe as “mom jean shorts.” A lot of people’s questions for her seem like attempts to figure out precisely what her deal is and what environment she’s a product of. What’s her family like? (Her mother was in a nineties surf/punk band called the Trashwomen and likes her daughter’s music very much.) Why’d she leave high school? (“It just seemed like something I could get away with at the time.”) Does she think of her music as pop or hip-hop? (She wants her music to be a “fusion” of a lot of things.) What’s her sexual orientation? (“I like people who like me.”) Ninety percent of these questions translate as “you’re white and getting attention for doing things we still code as ‘black,’ and it’s confusing, so we would appreciate if you could offer us some sort of narrative that explains your identity and assures us you’re okay.”

Another recurring theme: A lot of the people who’ve met or written about Kreayshawn this week wind up comparing her to pop stars, particularly Ke$ha. Kreayshawn, for her part, says it’d be fun to collaborate with Ke$ha and make “hip-pop” — though at least one person at the label office has already taken to calling her “Swag Spice,” which feels both accurate and as “hip-pop” as it gets. This is an oddly long distance from the kinds of artists she’s made videos for and the ones Stretch manages. For a look at material that really “sums up where she comes from and who she’s working with,” he recommends looking at DB tha General clips like “Guilty by Association” and “Gas for Sale” — videos she directed, from contexts significantly more “hood” than she presents herself as. The recommendation seems a bit pointed.

Besides: All those YouTube views for “Gucci Gucci” are driven more by pop’s appeal than hip-hop’s — or by some space between the two, where an actual rap track might also appeal to people who usually listen to Ke$ha talk-rap. This is surely part of the profit potential Columbia saw in her. It’s also another source of flack and grumbling: When a white girl raps, and not even in any notably skilled way, suddenly it’s a pop sensation? Not that the younger generation of hip-hop fans is incredibly concerned with technical skills. “Waka Flocka Flame,” Kreayshawn tells me, “some of his lyrics are, like, common sentences. But just the way he is, and the way he delivers it, makes it this crazy metal hip-hop.”

Later in the day, four black girls — they look like teenagers — recognize Kreayshawn in Soho, get their picture taken, and surreptitiously follow her to the store where she’d be doing her next press shoot. I ask her a few times whether she’s had any fun at all while in New York, but the answer’s always no — all work, press, then straight to sleep. So when’s the fun part? “When I get back home, cash that check, and relax.” Her main plan on this front is to try a spa day, which she’s never done before; where that fits in the grand scheme of class, race, Los Angeles, and her aversion to label-wearing types is anyone’s guess.

blimey 1:32 a.m.
Peaky Blinders to End After Season 6, But May Peakily Continue ‘In Another Form’ Innit.
benana split Yesterday at 11:31 p.m.
Please Let Us Know If You Rescued Ben’s Ana de Armas Cutout From the Trash We will pay any price.
monuments Yesterday at 10:49 p.m.
Trump Adds Walt Disney, Whitney Houston, Alex Trebek to ‘American Heroes’ Garden The president issued an amended executive order adding dozens of honorees to the monument park he announced this summer.
rupaul's drag race Yesterday at 9:04 p.m.
Drag Race to Put the ‘Roo’ in RuPaul With Australia and New Zealand Series RuPaul and Michelle Visage will join the judge’s table of RuPaul’s Drag Race Down Under.
pardon? Yesterday at 8:04 p.m.
Is Trump Really Going to Pardon Lil Wayne on His Last Day In Office? POTUS is allegedly preparing to issue dozens of pardons and commutations on Tuesday, so, why not?
my album is dropping Yesterday at 4:52 p.m.
Weezer to Drop New Album OK Human Next Week A second album, Van Weezer, is scheduled to be released on May 7.
benana split Yesterday at 2:25 p.m.
Send Ben Affleck Some Dunkin’ Because Ana de Armas Reportedly de Dumped Him Our thoughts and prayers are with Ana de Armas Updates at this time.
q&a Yesterday at 2:00 p.m.
MLK/FBI Delves into the ‘Darkest Part’ of FBI History Sam Pollard’s documentary chronicles the bureau’s years-long campaign of governmental harassment, wire-tapping, and attempted defamation.
cancellations Yesterday at 1:30 p.m.
Simon & Schuster Cancels Senator Josh Hawley’s Book After Capitol Riot Hawley has found a new publisher for his book in Regnery, which is distributed globally by… wait for it… Simon & Schuster.
now streaming Yesterday at 1:00 p.m.
The 30 Best Movies for Kids on Netflix The Princess and the Frog, Enola Holmes, The Willoughbys, and more.
overnights Yesterday at 12:54 p.m.
90 Day Fiancé Recap: Natalie Goes Full Villain We’ve reached the point where it’s no longer possible to give Natalie the benefit of the doubt.
the cayman islands Yesterday at 12:31 p.m.
Armie Hammer Says He’s ‘Genuinely Sorry’ For Calling Woman ‘Miss Cayman’ in Vid The Miss Cayman Universe Committee released a statement saying that the Committee was “very disturbed by the video.”
overnights Yesterday at 10:03 a.m.
The Real Housewives of Atlanta Recap: Daddy Issues Cynthia wrestles with whether or not to invite her father to her pandemic wedding, while Kandi gets the girls together for a good cause.
vulture lists Yesterday at 10:00 a.m.
The 50 Greatest Western Movies Ever Made A hard look at one of cinema’s oldest genres.
vulture picks Yesterday at 7:30 a.m.
27 Notable New Releases Over the Next Two Weeks Frances McDormand’s Zoom talk show, a new Euphoria episode, the Anything for Selena podcast, and more.
birthdays Yesterday at 2:08 a.m.
Betty White Celebrates Her 99th With Carol Burnett Feeding a Baby Elephant Just because she’s almost 100 years old doesn’t mean the hustle stops for even a second.
quarantine baby Jan. 17, 2021
Jessica Biel and Justin Timberlake Confirm Arrival of Quarantine Baby, Phineas Apparently Ellen was one of the first people to learn of his existence.
overnights Jan. 17, 2021
Your Honor Recap: The Telltale Brain As the action shifts to Michael’s courtroom, his guilt tags along.
we did it joe Jan. 17, 2021
After 22 Years, the New Radicals Reunite to Play Virtual Biden Inaugural Parade This world is gonna pull through.
overnights Jan. 17, 2021
All Creatures Great and Small Recap: The Prodigal Brother Returns Tristan the Slightly Rakish has come to Darrowby.
More Stories