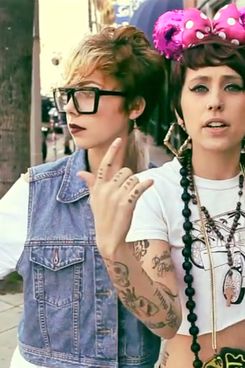 Since rocking a pair of Minnie Mouse ears in her sassy “Gucci Gucci” video, Kreayshawn has racked up 3 million YouTube views, landed a major record deal, and nabbed the title of Latest Controversial White Rapper. She has also, probably, made a few enemies in the luxury-goods industry, thanks to the hook of her single (“Gucci Gucci, Louis Louis, Fendi Fendi, Prada / Basic bitches wear that shit so I don’t even bother”). Curious as to what un-basic bitches wear, Vulture caught up with Kreayshawn to discuss her sartorial vision, and more specifically, to examine the current state of Summer Music Video Fashion. She kindly agreed to watch the latest offerings from Gaga, Katy Perry, Britney Spears, and more, then give us her opinions. Click through for Kreayshawn’s opinion on bodysuits, pantslessness, the sock-sandal look, and the evolution of Rebecca Black.

“You know when you wear a pair of Uggs, and everyone’s like, ‘They’re gonna be so ugly,’ but then right when you put them on you can’t take ‘em off? That’s probably what happened to her. She just got so comfortable — can you imagine wearing no bra every day and just pasties and a bodysuit? It would make you look good — and you probably look better in a bodysuit than naked, too. And then you go to a club and everyone’s grinding on each other naked and in bodysuits.” [Mandatory follow up question: Wait, you still wear Uggs?  “Yeah, I do.”]
“Man, Britney Spears — you can’t hate on anything she does. Well for me, especially, just because I’ve been instilled with this Britney Spears thing since I was a little girl. Even when she shaves her head and does all this crazy shit — she’s still not wrong, dammit. She’s still not wrong. The leotard thing, it’s either you can pull it off perfectly or it’s like a complete fail. If you’re in a music video rocking it, you pretty much have no choice but to pull it off. But personally, if I were going to a party, I would definitely put some goddamn pants on. I mean, I’m a tights person, I love tights. I wear little shorts and huge knit tights, fishnet, thin, thick, cloth. So maybe one day you’ll catch me in a leotard with tights, but I don’t know about the whole leotard thing.”
“The socks and sandals are a classic — when you get out of jail, you usually have your socks and sandals on. Because if you’re wearing high heels, they take your shoes, and they usually pull your shoelaces out, and they give you these little flip-flops. You gotta rock the flip-flops with the socks. I liked the clothes, especially her long red hair. She’s ballin’.”
“She was owning that role right there. She was like the cool nerd. I used to have braces, so I know how it is to be a nerd. I didn’t have head-gear, but I’m wearing my retainer right now, actually. I’m really nerding it out.
“Oh my God, I just love the song, and it made me feel like I wanted to sock some guy in the face. Which is weird, because I’m not really a person to be influenced by mainstream music. But I love Beyoncé. And I can’t wear heels. Usually, if I have to elevate myself, I wear old-school Spice Girl platforms or something.”
“It’s funny because it reminded me of the mini-version of Beyoncé’s “Run the World” video. It’s like the kid version of what’s in right now. It’s, like, beyond fashionable. Like, goddamn, girl. Willow is one confident, fierce child, you can tell.”
“Shit, I wish I could wear a skintight bodysuit like that. I’d look like I’d be popping in from outer space or something; she makes it look normal, like you could wear it to the club. Nicki’s crazy; she has this whole animated style about her and even with her delivery, and I think it comes off in her style a lot.”
“I fucking loved her shoes in the video. She had the straight Spice Girls platform. I loved her sweater, and I loved her shoes, and I loved everything she was wearing, and it kind of made me jealous. I was like, Man, I wanna do a dance like that. And the song had a passion about it, and a reason for the song — a lot of the other songs are a jam, a good song to jam to on the radio, but hers had a meaning and passion. And the video reflected the heat of the moment, and the fashion was on point. So she gets the five-star.”
“She looked a lot better in the Katy Perry video. It almost didn’t look like the same girl. This is what’s so sad: Out of all the videos you sent me, the only one I had previously watched was the Rebecca Black video. So I was upset with myself. I don’t know what that means.”