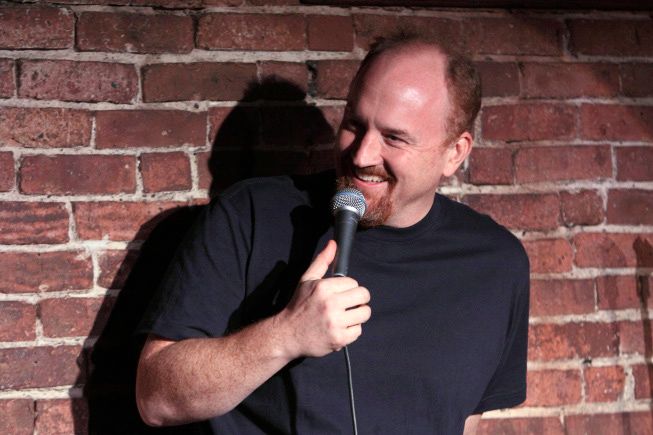 In its first season, Louie established itself as one of the most enjoyably disorienting sitcoms on TV: Old-trope story lines (bad first dates, aging) were infused with the warped rhythms and fuzzy logic of a half-remembered dream; laugh tracks were nixed in favor of akimbo jazz riffs; and even the most seemingly ancillary characters spoke with a core-cutting honesty not seen since Lucy Van Pelt set up her street-side shrink operation. As a result, it was sometimes hard to tell if Louie was intended as sober comedy, perverse drama, or both.

Such is the case with last night’s season-two premiere, “Pregnant,” which includes everything from a miscarriage scare to a rim-job rim shot, yet still manages an unstrained sense of uplift. The episode opens on an intimate daddy-daughter bonding moment, as Louie brushes his youngest girl’s teeth; it’s a callback, perhaps, to season one’s finale, in which Louie and his two girls enjoy a late-night pancake breakfast — only this scene is notably less idyllic. “I like mama’s [house] better,” she tells him. “She makes good food.” Oh, and also: “I love her more.” Louie nods, motions her to the sink, and, when her back is turned, defeatedly flips the little girl off.

This tiny exchange sets up the episode’s underlying query: How does a guy known for dispensing harsh truths react when that same tough talk is thrown back at him? Before we can answer that, though, we watch a stand-up bit in which Louie recounts the time he took the kids to a pool only to find his youngest daughter didn’t trust him enough to get in the water. “I know how to look after you!” he barks, insulted. “I’m good at it! You’re not dead yet!”
We’re then treated to a Big Night–style montage of Louie breading, egging, and cooking up a storm. It’s a subtler, more mature way of giving the finger to the kids who don’t appreciate his culinary skills, yet it only ends in frustration, with his younger daughter — clearly the bigger pill of the two — moaning about how unfairly her dad doles out treats. Louie tries to teach her a lesson about envy: “The only time you look in your neighbor’s bowl,” he tells her, “is to make sure they have enough.” Then he gives in and hands her a treat.

Before he can finish his work in the kitchen, Louie’s seven-months-pregnant sister, Gretchen, unexpectedly shows up at his door, in town for an unexplained procedure after suffering a miscarriage a few years before. The two bond not over childhood memories, but over Louie’s ex-wife, whom Gretchen slams as both a “piece of shit” and a “pasty, big-titted, black-eyed guinea bitch” (vulgar putdowns, apparently, being part of the siblings’ shared patter familia). Louie half-laughs, half-winces, yet doesn’t quite rise to the bait — verbally slamming the ex remains taboo, but he’s clearly relieved to have someone else do his dirty work for him.

Gretchen, having recently left an unhappy relationship, tells Louie she wants to raise her kid by herself — a scenario he endorses in another stand-up routine, about the benefits of divorce. “It’s just humane,” he says, “to [let a] kid be in two houses full of people that are just fucking and having fun, and not yelling at each other.”

Back at home, Louie awakens in the middle of the night to the sound of his sister’s screaming. She’s engulfed in pain and convinced she’s going to lose another baby. Louie, who has no problem keeping his cool onstage, begins to panic, until he hears a knock on his door. It’s his neighbors, a thirtysomething gay couple who’ve come not to complain about the noise, but to help. A frazzled Louie turns them away repeatedly, until one of the neighbors calmly defuses him. “Brother,” he says, “you do not want your sister to die from pain, or lose her baby, because you’re awkward with strangers.” It’s a spot-on analysis — the kind of design flaw Louie no doubt knew existed, but needed an impartial observer to point out — and the normally stuck-in-his-ways dad quickly surrenders. He needs the help.

Once outside, Louie tries in vain to hail a cab; luckily, his Spanish-speaking neighbor is able to flag down a driver, and they get to the hospital. There’s an overly madcap scene in which they rush to the ER, only for Gretchen to let out a long, Blazing Saddles–caliber fart; turns out it was a false alarm. The doctors and hangers-on quickly peel away, looking chagrined, and no doubt feeling equally deflated.

Back home, Louie thanks the neighbor who took charge when he was frozen in fear. “I was really scared,” he says, “and you were not.” They embrace, and the unnamed helper gently chides Louie before departing. “Now you know who your neighbors are,” he says. “Don’t forget.” Louie heads back into his apartment, worn and somewhat taken aback — despite the lecture he’d given his daughter on neighborly charity, he’d never noticed the people across the hall. It’s a restrained and oddly touching moment, but one that lasts only a few seconds, as Louie’s soon back onstage, riffing about the difficulty of meeting new people, a spiel that ends in a hilariously tasteless riff on the true test of male companionship: “If you don’t eat your friend’s asshole out with your tongue, you’re not a friend.”

“Pregnant” may not make for a conventional season opener, but it makes it clear that the emotional mercurialness that makes Louie so watchable — the constant back-and-forth between profundity and profanity — thankfully hasn’t been solved. Feel free to discuss it with your own neighbors below. Just be sure not to get too awkward around them.