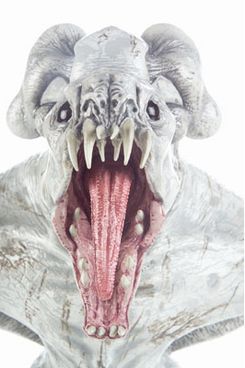 This article is going to include some spoilers for Super 8, but the picture to your right is not one of them. No, that’s not the alien from the new J.J. Abrams movie … it’s the alien from the movie Abrams produced three years ago, Cloverfield. You’d be forgiven for getting them confused, because although Super 8 spends the bulk of its running time trying to keep its rampaging alien out of sight, even before you finally lay eyes on the monster, you’ve kind of already seen it in a whole lot of other movies.

See if this rings any bells: Can you think of a movie alien that looks like an anorexic, oversize insect, or a delicacy you might gingerly rip apart in a new ethnic-food restaurant? Does it have a mouth like the Predator that curls in all sorts of intimidating ways? Can you watch it scuttle and hear it shriek? More than likely, you can think of quite a few cinematic aliens that fit the bill, since all these qualifiers could describe extraterrestrials from Starship Troopers, Battle: Los Angeles, the Alien movies, District 9, and countless other recent films, including Super 8.

Verisimilitude seems to be the new guiding factor when it comes to crafting a movie alien. It’s important now for the alien to resemble something that could feasibly be alive, to have a complex, realistic biology, and to contain the kind of carefully thought-out exoskeleton that would make for a great image in the making-of art book. All those articulated joints aren’t simply a selling point for the tie-in toy: They’re a product of the creature’s evolution, dictated by the terrain of its harsh planet, and agreed upon by three scientists hired to consult on the production.

Verisimilitude is a terrible guiding factor for crafting a movie alien.

Throw out the playbook, filmmakers! If you’re going to withhold your alien for the majority of the film, make sure that when we finally see it, it comes as an actual surprise. At this point, giant space bugs are the furthest thing from alien, since we’ve seen them in so many other films and they’re essentially grasshoppers on steroids. Why not think totally outside the box and give us character designs that are practically beyond our comprehension? In Cloverfield, we see bits and pieces of the monster at first and have to fit them together; how thrilling would it have been if we’d been unable to, because the design was too original for us to make heads or tails of? How oddly unique would it have been to finally see the entire monster and have no freaking idea how its digestive system works, or why it has teeth like that?

I know that Abrams has it in him for a super-weird creature, and he doesn’t have to go too far to find a great example of it. When Abrams co-created Lost, there was a famously off-screen monster that roared in the jungle and ripped apart trees. Was it a dinosaur? A rampaging insectoid beastie? No. When we eventually got to see the monster, it was something that no one could have predicted because it was just too out there: a giant, pulsing cloud of black smoke. It was a little bit weird, it was more than a little risky, and it was instantly iconic. Even after the show wrapped up, we’d be hard-pressed to explain how exactly that smoke monster worked, but compared to the overdone movie insects we’ve had to deal with lately, that doesn’t bug us one bit.