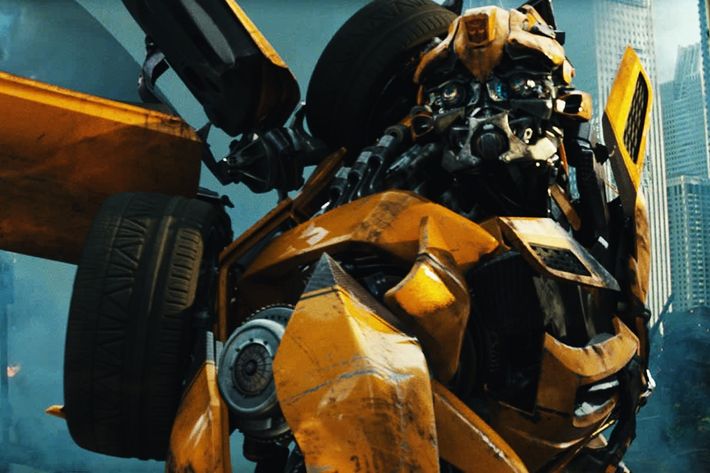 Michael Bay makes it laughably easy for us to loathe him, the way we loathe Donald Trump or the jerk in the BMW with the too-pretty wife and the house intended to make him feel big and onlookers small. Trophy women, trophy objets d’art, trophy automobiles that transform into trophy “Autobots” thanks to trophy FX via trophy budgets: He’s the Trophy Director. But Bay also has gifts — gifts that might or might not be inseparable from his oft-insufferable gigantism. His last movie, Transformers: Revenge of the Fallen, was a senseless hash of CGI robots and Megan Fox body parts, and it was so obnoxiously incoherent that it could have been self-parody. (Or is Bay as clueless as Trump?) But the third Transformers picture, Transformers: Dark of the Moon, is something else. It’s colossal, stupendous, ridiculously amazing, with a balls-to-the-walls climax in a devastated Chicago that’s like War of the Worlds on steroids. This is visionary filmmaking — and I hardly cared as I watched, mouth open, that the vision was of mutated Hasbro toys putting their fists through one another amid crumbling glass-and-steel towers while tomahawk missiles blew up metal birds and muscular American snipers shot out glowing robot eyeballs and Shia LaBeouf scampered over and under smoking debris to get to an even-more-smoking lingerie model in buttock-gripping slacks. The film is gloriously, passionately synthetic.

You know Bay and screenwriter Ehren Kruger are swinging for the moon when they rewrite one of the seminal events of late twentieth century — the 1969 moon landing, here undertaken to examine the wreckage of an Autobot craft bearing what turn out to be space-time-altering pillars and the Autobots’ venerable leader, Sentinel Prime — and hiring an actual, iconic participant, Buzz Aldrin, to explain what he and Neil Armstrong really found on the dark side during a supposed radio blackout. I’m thinking, on one hand, Thank heaven Neil Armstrong can’t be bought and, on the other, Way to go Paramount and Michael Bay! What else can corporate capitalism buy? Babes! Bay introduces Cosmic Sex Object 2.0, Rosie Huntington-Whiteley (in the cerebral role of “Carly”), by placing the camera behind her long, long thighs, as if taunting born-again feminist Megan Fox (less extended in that department) as well as any woman hoping for a female lead who is something more than moveable (human) segments. We’re meant to resent Carly’s unctuous boss (Patrick Dempsey) for his ludicrously suggestive description of a car beside which Huntington-Whitely — in a short dress into which she has been vacuum-packed — stands. (“Look at the curves. Elegant, isn’t it? Beautiful, sensual … ”) But it’s the ownership of those chassis that’s the issue, not that they’re chassis. Feminists, meanwhile, are invited to identify with the humorless U.S. Cabinet Secretary Mearing (Frances McDormand), who tells Shia’s Sam Witwicky that even though he helped to save the world twice and has a medal from President Obama, he’s not a soldier but a “messenger.” The women will make poor Witwicky prove his potency all over again, doncha know.

The first hour of Dark of the Moon is tighter than Revenge of the Fallen, but it still has that self-parodic vibe. Bay has too much testosterone to shoot a simple dialogue scene, smashing together disparate shots while actors like John Malkovich (as Witwicky’s new boss) pitch themselves into the frame as if it’s a gladiator arena. Malkovich knows that Transformers regular John Turturro will be making an entrance later in the picture and that he has to work fast to give the film’s weirdest performance — and he’s up to it, being, unlike Turturro, untethered by known laws of human psychology or cognition. But even Malkovich is no match for Ken Jeong, representing not just himself but all Asian races for the Who Can Abase Himself/Herself Most for Money in a Michael Bay Movie? As a scientist in over his head with the Autobots’ archenemies, the Decepticons, Jeong throws himself at Shia in a men’s room stall, jabbering wildly and pulling a top-secret memo from between his legs. Korea wins! Freed from Jeong’s overacting, Shia reasserts his male dominance by pawing Rosie in an elevator while “You Light Up My Life” issues from its speakers. The Joseph Brooks Memorial Sexual Predator Foundation thanks Paramount and Michael Bay for their generous donation.

The movie gets better. It gets, in fact, thrilling. The Transformers’ transformations from cars or computers or guided missiles to robots are as fast as ever but seemed — to these relatively slow eyes — both more detailed and more realistic. Maybe that’s because I’ve been reading a lot of Ray Kurzweil, who argues that nanotechnology will, in the not distant future, make transformations at a molecular level routine, so that cars could well turn into watches and watches into Rosie Huntington-Whiteley. These robots have gravity, physical and emotional. Sentinel, inert on the moon but rescued and revived by his former student, Optimus Prime, has the voice of Leonard Nimoy, a rasp that evokes the dreams of sci-fi aficionados young and old, sophomoric and postdoctoral and even, thanks to our current commander-in-chief’s reverence for Spock, presidential. Our inner nerds cannot but be stirred when Optimus (voiced by Peter Cullen) bows down to Nimoy’s Sentinel — or jolted when Sentinel’s righteousness is tested. Can we forgive screenwriter Kruger for appropriating Spock’s most moving line (“The needs of the many outweigh the needs of the few”) from the most moving of all sci-fi sequels, Star Trek II: The Wrath of Khan? Absolutely not — it’s sacrilege. But at least Kruger and Bay are thinking big. They want that battle for Earth on the streets of Chicago to mean something.

In Dark of the Moon, Bay’s action sequences are crazily ambitious, and the son-of-a-top-gun pulls them off. (The top gun in this case is producer Steven Spielberg, whose high scores in Indiana Jones and the Temple of Doom and Jurassic Park have rarely been threatened.) A highway chase that starts when three speeding black Lincoln Continentals turn into metallic tumbleweeds and then massive Decepticon assassins is shot and edited (and animated) like nothing I’ve ever seen; it leaves the spatially incoherent chases in The Dark Knight and The Matrix Reloaded choking in the dust. But Bay is just warming up for the assault on Chicago, where Decepticons led by Megatron (voice of Hugo Weaving) and Shockwave (who can turn into a self-propelled cannon) have taken over the city after vaporizing thousands of fleeing citizens. This is where Dark of the Moon transforms into a war movie, and I don’t care if Huntington-Whiteley does find time to squeeze into several improbable pairs of pants and lacquer her pillowy lips, it’s an in-fucking-credible one. The Decepticons have told the people of Earth they only want to extract some of the planet’s natural resources — and “To Serve Man” is an ethical treatise. With Optimus and his Autobots nowhere to be found, Witwicky joins up with Josh Duhamel’s Lennox, who enlists Tyrese Gibson’s Epps and Epps’s band of black brothers, for what is likely a suicide mission.

The 3-D is astonishing, vertiginous, the camera plunging after paratroopers down the length of massive skyscrapers toward robots mashing one another’s heads and a giant Decepticon octopus with incinerating tentacles that would make even It Came From Beneath the Sea’s stop-motion legend Ray Harryhausen — who doesn’t have much use for CGI — murmur, “Fuck me.” The scene in which a skyscraper begins to tip and our heroes slide toward certain death while on the other side of the floor-to-ceiling windows Decepticon destroyers bear down on them produces that thrillingly irrational Saturday-matinee feeling of, “They can’t possibly escape. They’re dead. I don’t care if they’re the heroes; it’s all over … ” I imagine Dark of the Moon would have almost the same kind of punch without the glasses, but why not pop an Advil and pony up the extra bucks for the Full Michael Bay? I even forgave Bay when Huntington-Whiteley helped turn the tide by telling one giant villain that no matter how big he thinks he is he’s the other giant villain’s bitch — because a line like that has, in this context, emotional purity. It’s the sort of thing Bay himself might say, watching his trophy movie: “Who’s king of the world now, Cameron, you pussy?”

The Colossal, Stupendous, Ridiculously Amazing Transformers: Dark of the Moon