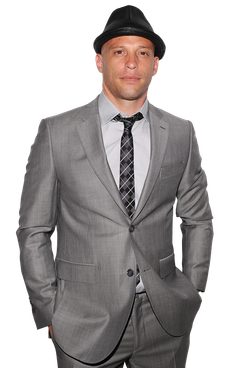 In 2005, TLC brought us the surprisingly engaging Miami Ink, a look inside a bustling Miami tattoo parlor that was both a showcase for gorgeous, oddball body art and a launching pad for tattoo-TV kingpin Ami. The show was spun into a franchise, with brand extensions LA Ink, London Ink — and, now, NY Ink, James’s return to our TV screens. Ahead of tonight’s new episode, Vulture chatted with James about the new shop, the new show, and the latest developments in tramp-stamp technology.

What’s changed between NY Ink and Miami Ink?
The cast is definitely the biggest difference. Miami Ink was a bunch of best friends in a shop, so there was a lot less tension. What we managed to create in [NY Ink] is put a cast together that’s so diverse. Basically we tried to get a bunch of people to gel together, even though we knew that most likely it was not gonna happen. There’s been a lot of friction, which causes a lot of drama, which causes a lot more interest.

TV has changed in the past seven years. TV is more open: They want to see more of the drama and the things that go on behind the doors. So we opened the doors for it. What you’re getting a lot more of is the personal issues behind the shop that we kept out of Miami Ink and London Ink and LA Ink, and I think that’s just the evolution of TV. Usually we would have fought [revealing personal details], but we found a comfort zone where we don’t mind giving the drama. Now it’s like a free-for-all.

What’s your favorite tattoo from the New York tenure?
I enjoy doing a lot of black and gray these days, which is something I’ve gotten into because I’ve managed to work with Tim Hendricks, who to me is one of the best guys in the world for black and grey and portrait stuff. And being around my new cast members pushed me in a different direction: Tommy Montoya got me trying to do more photo-realism, more black and gray tattoos, more West Coast style. And at the same time I help them out with what I do, so it’s nice to feed off each other, you know? It’s positive.

Are you now in New York full-time?
I split my days between Miami and New York. I literally turn around every week to go back to Miami and take care of Miami Ink, because it’s still a running shop and still a running business. We still have a ton of fans that come to Miami because it is a tourist destination, so I couldn’t just sell out on my old shop.

Earlier this season, XOJane called you out for letting one of your employees, Chris, act fairly demeaning toward another employee, Megan. How would you respond to that?
You know, at the end of the day, I try not to be a boss, I try to be a friend. And sometimes it doesn’t work. I mean, how do you discipline a guy that’s 36 years old? You do your best, you tell him what you think. You’re not his father. Also, Megan is a grown woman: She can definitely defend herself and she does, most of the time, and when I interfered a couple times she was like, “Ami, I can take care of myself.” I give her also the respect of knowing how to take care of herself. Listen, Chris Torres is the most persistent man I ever met, so I think slowly and surely he’s breaking her down.

Do you keep in touch with Kat Von D of LA Ink at all?
I don’t really have anything to do with the rest of the shows. I did Miami Ink and the spinoffs were a success for the network, but I just do Ami.

Do you have any thoughts on Kat Von D and Jesse James?
I really have no thoughts.

What’s big right now in tattooing?
The funny thing is that the most common tattoo now basically for women is rib tattoos. They get their ribs done and it seems like the lower back — formerly known as the tramp stamp — has left the building and now it’s the rib cage. You know, I don’t get it, the women complained so long about how painful the lower-back tattoo was and now they went to an even harder spot.

I read you had your first tattoo at 15.
My professional tattoo was done at 15. My first tattoo, though, was 13.

What does that mean?
[Laughs.] It was my first kind of homemade tattoo. It means you poke yourself with a needle and Indian ink.

Have you ever refused to do a tattoo?
Anything that revolves around racial tattoos, I stay away from: no swastikas, no negative tattoos. I believe that a lot goes into a tattoo and when you do something negative, you share it, and the person that gets it gets to live with it for the rest of their lives. It’s something negative on their body and you’re the one that gives it, and that’s just bad karma.

You served in the Israeli army. Did you learn anything there that affected your tattooing?
I was tattooed way before I went in the service. If anything, being in the service at the time pretty much stalled me from actually tattooing. I knew that I wanted to do it. At the age of 18, before the army, I did my first professional tattoo. I just had to stick around and finish the army and then I knew as soon as I got out that that’s what I was gonna do.