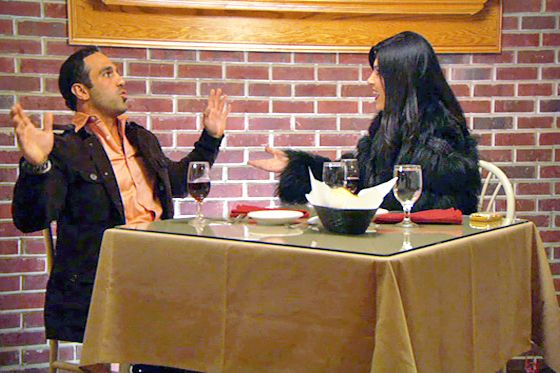 Really, this week is all about the wonder twins, Teresa and Joe, because the other ladies aren’t up to much. Kathy’s still using her airtime to kiss Caroline’s ass and widen her eyes far enough to show off her skull, which is a move that she thinks makes her look innocent. And Caroline’s so nervous about her first show for 101.5 FM that she’s begun talking about herself in the third person and freaking out about having to do the weather. If only someone had told her to pretend that she’s the weather’s mother, then she totally would have killed it: “Sunshine, never leave. Never leave home.” But instead she flubs her lines and says a lot of “umms” as the show cuts to Jacqueline in her car, making a face like she just saw those nude pics of Danielle Staub bending over a Scores banquette. I’m disappointed that we don’t also get a shot of Ashley cruising down I-287 in her brand-new Jeep, making devil horns with one hand and flat-ironing with the other.

It turns out that common sense passes as advice on Jersey radio. Some nuggets of wisdom? “Let everything slide” if you’re having a disagreement. “Forgive” if someone has started some shit with you. “If you want a piece of cake, eat it,” even if that means that you can’t get into your Posche jeans after the holidays. For me, the best piece of advice to come out of Caroline’s show is “rock those boobies.” That’s exactly what Melissa’s doing in this season’s opening credits, stuffing her boobies into a deep-cut satin dress that makes them look just like hard rocks.

Ah, Melissa. We get a “Thank you, Jeeeeeesus” from her within the first couple of seconds of her appearance in this episode. She’s got on a zig-zag shirt like a fame-whoring Charlie Brown, and she’s thrilled that Joe’s going to meet with Teresa to make the peace. But first Joe’s got to put on his sensitive peach dress shirt and a cross so big that Jeeeeeesus can see it from heaven. The shot is intercut with Teresa putting in her big hoops at a gilded mirror, and the juxtaposition gives the bizarre impression that these two are going on a date. Well, maaaaaybe it’s less bizarre when you consider that they’ve been flipping out on each other like two people who are indeed dating. In an interview, Teresa blames her and her brother’s problems on “the poison that his wife’s given him,” and boy, somebody needs a sex-ed lesson from Joe Gorga, right? The poison goes from the husband into the wife, especially after she’s been too tired to have sex for four days. Then it’s really poisonous. Everybody knows that!

Joe brings Teresa’s Blue Letter to Portofino’s because when you’re trying to make peace, the thing most guaranteed to chill out the other person is rubbing her words in her face. Always works great! If it kind of seemed like brother and sister were going on a date during their preparations, just you wait until they get to the restaurant. Soft light, red wine, special duds, a private table for two against the wall. I’m starting to think that Teresa was Nos. 1, 2, and 3 of the fiancées Joe had before he settled down with Melissa. But just when things look like they’re going to turn romantic, Joe turns into a semiotics professor. He grills Teresa on the meaning behind meaning, the operations of language, the modality of signs, and I flash back to my time at Brown. “What did you mean by ‘hurting me and my family’?” he ponders, and what Teresa should really answer is, “We’ve got to unpack the signifiers ‘hurt’ and ‘family’ before we can even begin to touch what is signified by those concepts,” except she’s too flustered to speak. Next up from Professor Joe is a pithy lesson on the “unreliable narrator,” as he blames Tre for the “disgusting” turn of events at the Christening when he’s the one responsible for it. There’s no stopping him at this point. He’s hopping from subject to subject, following a branch of post-postmodern logic all the way to a tricky exploration of incest taboos. It’s his belief that the origin of his and Teresa’s problems stem from the fact (and this is fact, because Teresa confirms it) that she put her brother before her husband during her first years of marriage, creating friction between da Joes. Her brother warned her to “stop telling your husband I’m great,” but Tre just couldn’t do that because, come on. I don’t need to get into this. You’ve all seen Gorga.

The jealousy goes the other way, too. Teresa disapproves of how Joe moved Melissa into his house only a month after they met, but sometimes you just instantly know someone’s soul. Or else you liked the way they looking sitting in a pool in Cancun in a leopard bikini. Either way. She thinks that Melissa was gold digging, but in Melissa’s defense, from the looks of the Gorga residence, at most she was gold-plated digging.

Cheeks flushed, brother and sister fight back and forth, and the only productive information to come out of this exchange is that Joe doesn’t have Facebook. If you want him at your book signing, then you’d better fire up the Evite. (What’s sad is that you can see on Teresa’s face how she’s just now realizing he never got any of her pokes.) After quarreling the way that lovers will, it seems like maybe the two have reached the end of their battle, but no, no, it is time to release the Kraken.

The second that Teresa recites what Melissa wrote inside that card, Joe Gorga’s eyes widen. I mean, not as wide as Kathy’s, but they go pretty wide. And maybe I didn’t grasp the immensity of that insult when I first encountered it, but there is no question that Joe’s facial expression translates into a silent but hearty “Dayeeeeeeem, girl!” Those eyes glimmer with admiration for his wife’s casual way with bitchiness, and he falls in love with her a little more in that moment. And then, before he can get too turned on, he redirects his energy back to his lecture. “Okay, all right, I’ll answer that,” he says. And this is when we learn that “redone” was retaliation for Teresa’s comment about how the Gorgas only finished their home in a year because they had a loan. This is where I freely admit that I have even less of an idea about why that’s insulting than I did with “redone.” Is it something about being unable to pay for your marble staircase out of pocket? Someone please explain it to me in comments.

The meeting wraps up with Joe pointing out that there’s no reason that Melissa and Teresa shouldn’t get along because they’re basically the same person. “Youse a both flashy!” he says eloquently. And even more eloquently, he explains that his family needs to show his wife some respect, even if “my wife was the biggest whore on the street.” Now there’s something you put inside a card! All that’s left is for Teresa to work it out with Melissa, and with that decree Joe calls it a night, complaining of a headache, a.k.a. blue balls of the brain.

Jacqueline offers to host the Teresa-Melissa showdown because otherwise she wouldn’t be on the show. On the big day, Caroline swoops by for a cup of coffee and is clearly unable to stop talking like she’s on the radio. “Put yer big girl panties on,” she sound-bites to Teresa, dangling the promise of a future in which Joe Gorga will be able to horse around with Melania and Gia on the floor. I can’t think of anything more fun for the girls, except if he gets drunk and sends them straight through to the basement. Teresa insists that she’s “calm and cool as a whistle,” which leads me to assume that maybe it’s an old country Italian tradition to keep your whistles in the icebox.

The scene is set. Thank God Jacqueline’s got chocolate-chip cookies and not sprinkles. The library table’s ready, and there’s no tablecloth for Teresa to yank in a blind rage. The doorbell that sounds like a phone rings. Melissa enters, and she and Teresa take to their seats. And suddenly they both just start laughing and talking at the same time, roaring, “Can you believe how dumb and petty we’ve been over the stupidest stuff in the whole universe, when we’re obviously both living in embarrassingly gaudy homes that we can’t afford?!” No, I’m kidding. They just awkwardly stare at each other. You’ll have to wait for next week’s episode to find out who loves Joey Gorga more.