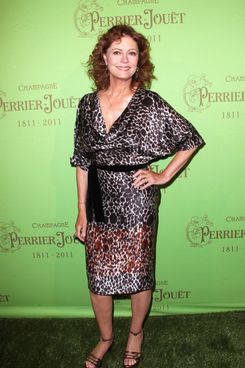 Your summer travel plans may involve the beach, but Susan Sarandon is heading to China this month to play in a televised Ping-Pong match. “At the end of June, we’re all going to be in Shanghai, humiliating ourselves,” Sarandon, owner of the SPiN New York Ping-Pong club, told us last night at Perrier-Jouet’s 200th anniversary party at the Mondrian Soho. “It will be the first time I’ve played publicly, and my secret will be out. The secret that I don’t play. I’m not very good at all.” This is Sarandon’s first trip to China, and she also plans to attend the Shanghai Film Festival and watch some “serious” Ping-Pong events before picking up her paddle in front of a crowd. Who is she playing against? “They said they were going to find somebody that plays on my level,” she said. “It would have to be someone who’s blind.”

Susan Sarandon Confesses She’s Not Any Good at Ping-Pong