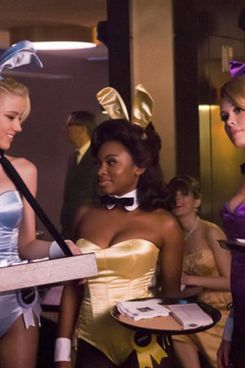 The calendar, the sun, the lines outside for X-Men: First Class and that stray kernel of popcorn that’s been lodged in your gums all day are all sure signs that it’s summer movie season. But as you enjoy your expensively produced blockbusters, the folks at the broadcast networks would like you to forget summer and look ahead to fall, when they’ll be back in business with a slew of fresh programming. They’re so anxious to do this that they’ve already started substantial ad campaigns on behalf of their new fall lineups in movie theaters, far earlier than usual.

Using movie advertising is nothing new for networks, which regularly buy time in those pre-show infotainment reels. What’s different this year is how quickly broadcasters have started banging the drum in theaters: NBC crashed a three-minute image spot featuring interviews with the stars of The Playboy Club, Whitney, and its other new shows and got it to multiplexes late last month, just in time to get shown before Bridesmaids. Historically, such promotion hasn’t started until late June or July. “In looking at last year’s broadcast fall launch dynamics,” says NBC head of marketing Adam Stotsky, “[we realized that] the earlier we can get started building awareness of our new shows, the better.” Vulture has also learned that this weekend Fox is premiering nationwide in-theater 60-second trailers for its mega dino-drama Terra Nova, which will appear in front of showings of X-Men: First Class; ads for X Factor should follow next month.

NBC (and Fox) execs clearly think rushing these ads out makes sense: Though it would seem as if nobody’s really making decisions about fall programming choices in the heat of June, the networks these days need as much time as possible to start building awareness of new shows. Ratings for broadcasters have been in steady decline, and while the Big Four still draw much bigger crowds on average than cable, they can no longer rely on simply selling shows on their own air. Plus, blockbusters released in the summer reach a lot of young men and women under 35 — the exact age group that’s been the most eager to abandon live TV with all of its ads. Spending a big chunk of change in the summer to force-feed awareness to this elusive demo is probably a wise investment.

ain't slowing down 1:37 p.m.
Michael Caine Shuts Down Retirement Rumors “I haven’t retired and not a lot of people know that”
overnights 12:00 p.m.
You Recap: Brotherly Love Why does Joe think he can stalk without getting obsessed or making Love murderously jealous?
follow friday 9:51 a.m.
Yamini Nambimadom Wants a Monogamous Marriage With Her Bed We caught up with the comedian on Instagram Live.
video games 3:06 a.m.
Okay Villagers, Get Ready for the Animal Crossing: New Horizons Update A lot of new features are coming on November 5.
trailer mix 12:31 a.m.
The Doctor Who: Flux Trailer Serves Jodie Whittaker a Buffet of Baddies Including the Ood, Sontarans, Weeping Angels, and Cybermen!
#freebritney Yesterday at 9:11 p.m.
Britney Spears Says She’s Afraid of Making a Mistake Now That She’s Free She wrote on Instagram that the paparazzi seem to want to scare her into doing “something crazy.”
guess who's back Yesterday at 7:08 p.m.
Jennifer Coolidge Says Hi to Season Two of The White Lotus She’ll reprise her role as Tanya in the HBO series.
overnights Yesterday at 6:56 p.m.
Canada’s Drag Race Season-Premiere Recap: Coat Cheque After a controversy-filled offseason, Canada’s Drag Race is back with a new group of queens with incredible looks.
machine learned Yesterday at 6:24 p.m.
Should You Buy the New Roku Things? Answering the essential questions about the brand’s latest 4K Streaming Sticks.
comedy review Yesterday at 6:00 p.m.
Dave Chappelle’s Endless Feedback Loop The Closer proves the comedian is right about one thing: It’s time for a break.
By Craig Jenkins
industry drama Yesterday at 5:50 p.m.
The 2022 Golden Globes Are Happening Whether NBC Likes It Or Not The HFPA is going forward with … something on January 9.
tiny desk/big band Yesterday at 5:43 p.m.
Camila Cabello Performed a New Song With a Mariachi Band for Her Tiny Desk For her unreleased song “La Buena Vida.”
overnights Yesterday at 5:00 p.m.
You Recap: Where the Wild Things Are Joe’s weekend camping trip with the boys is a shirtless romp, and it’s insane that none of them end up kissing.
movie review Yesterday at 4:46 p.m.
The Last Duel Is a Bro-Down Epic With a Metal Heart It’s not so much a history lesson as it is a savage, beautiful catharsis.
on comedy Yesterday at 4:10 p.m.
Netflix Fires Alleged Leaker As Dave Chappelle News Cycle Continues “The only person who gets fired is the Black person who was quiet the entire time,” the employee responded.
haunted pixels Yesterday at 4:00 p.m.
When Video Games Feel Haunted: Inside the Low-Res Horror Boom Indie designers are conjuring meta-scares with fuzzy pixelated graphics.
injuries Yesterday at 3:58 p.m.
America’s Got Talent: Extreme Stuntman Suffers Near-Death Accident on Set Jonathan Goodwin was airlifted to a trauma unit after a rehearsal went dangerously wrong.
overnights Yesterday at 3:20 p.m.
I Know What You Did Last Summer Series-Premiere Recap The teen-thriller classic gets an update with a new twist that makes it equal parts spooky and serious.
overnights Yesterday at 2:47 p.m.
You Recap: Coming Out of My Cage Sure, Joe and Love kill people, but they don’t want to be “the kind of people who kill people.” You know?
book review Yesterday at 2:08 p.m.
Fear and Loathing in ‘Asian America’ In The Loneliest Americans, Jay Caspian Kang tries but fails to restore meaning to an empty term.
More Stories