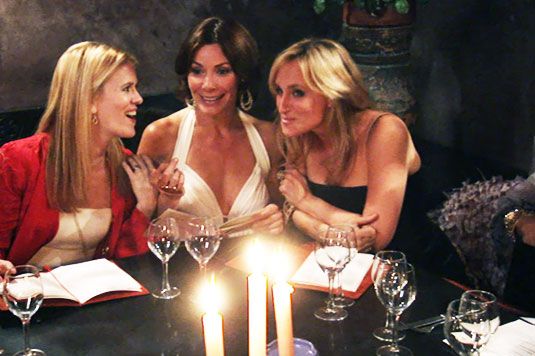 One of the (many) weaknesses of this season of the Real Housewives of New York City is that Bethenny Frankel is no longer on-camera to respond to events on behalf of the viewer. Oh, how we miss her catty asides! At times, they were the only things that attached the Botox-bloated show to the ground. This season other cast members have tried to fill that role, the role of the surrogate regular person. Cindy, at times, pulls this off by being constantly agog at the witchery that surrounds her. Even LuAnn, for all her haughtiness, sometimes comes out with the show’s most down-to-earth reactions. But though those two are sassy brunettes, they’re no Bethenny.

At some point during this episode, an exceptionally weird thing happened. It’s fitting that the word “weird” was said about two dozen times during this segment, because honestly, it was almost an out-of-body experience. When Alex stormed downstairs at the Riad to interrupt Cindy, Kelly, and LuAnn’s quiet henna session, it was Kelly who assumed the role of the disbelieving viewer. “It looks weird, Alex, it didn’t look normal,” she says to Alex, who is barely listening because she’s trying to dislodge a jaw locked from years of abuse (way to go, Simon). “You can’t be acting, you have to be real.” Kelly was right. Alex was behaving bizarrely off the handle. “Alex has these moments where she’s Alexa and she’s still at Northwestern acting onstage,” Kelly says, in an ugly reminder of just how fake this show is. “You’re not being authentic, that’s not how normal people act! … You go from zero to 60 and we don’t know why.”

What made this experience so bizarre, this moment of Kelly-as-the-relatable-one, was that of course it went on too long and eventually Kelly ventured into her old self again, accusing Alex of “creating a casino” and calling her scarf an “Afghan” and asking, “Who’s gonna fix this, Santa?” It was like watching yourself go insane, from the inside.

You know, even more than usual. On to the winners! 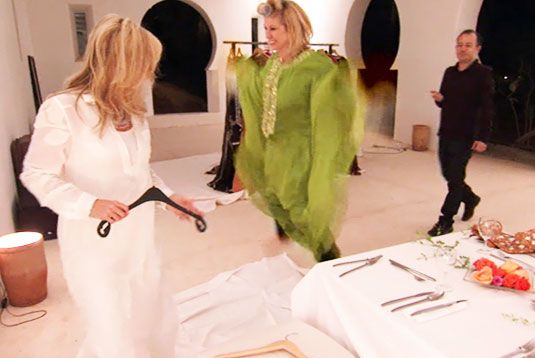 According to “Page Six” today, Ramona dodged a real bullet in this episode. Apparently a scene was cut where she was dancing around drunkenly in a burqa. Without that, she was only mildly harmful. You know, she was the same, ridiculous semi-drunk, semi-sexy mess she always is. But she was a little aware of her own flakiness. She admitted she couldn’t quite remember what happened in her fight with Jill, moments after it happened. “What I felt, and that doesn’t mean that’s what really happened, but what I felt was that she was being really aggressive toward me,” she said. She even admits she might have forgotten what time dinner was. Still, she was sort of an ass, so in this episode she fell short. We didn’t even get many classic Ramona-isms, although “Native American Moroccan dress” was pretty good. 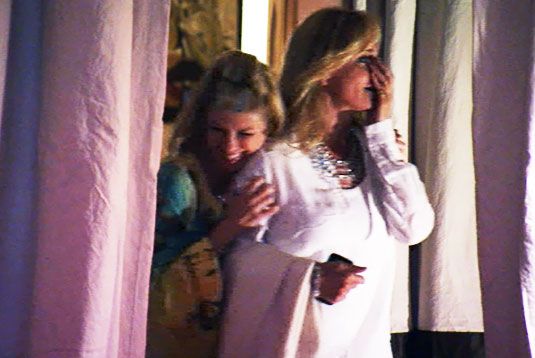 Sonja, on the other hand, was back on her game in this episode. She was fun and drunk, and flirted with guys and women alike. “I know the other girls think we’re weird because we slept together,” she says to Ramona, who is clearly not as into it as Sonja is. Still, she was sort of a mess and didn’t help any of the bizarrely fake fights. (Choice moment: When Kelly looked in on the ladies consoling Ramona, Sonja tries to lighten the mood. “You got your Pucci on?” she asks, and without even thinking about it Kelly goes, “It’s Diane von Furstenberg.”) 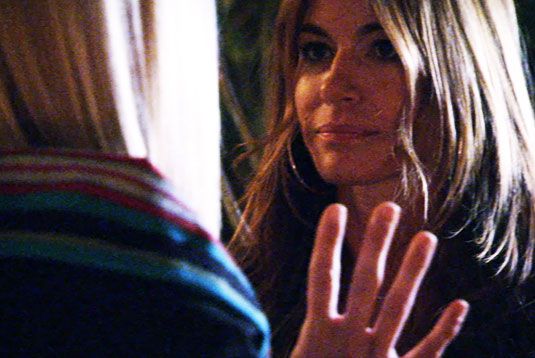 Well, we’ve already gone over some of Kelly’s issues. She looked amazing throughout (DVF earned that shout-out), although it’s regrettable that she’s taking advice on jewelry from LuAnn. What was that giant sun medallion? And who goes jogging in jewelry? She said she doesn’t play teams, and in this episode, she really didn’t. “All of us don’t need to get involved,” she says. “We’ll agree to disagree.” To quell strife, she even does this almost-shamanic calming of Alex, making her close and then open her eyes. And her face when Ramona goes to see LuAnn is priceless. She’s like a judge in a professional wrestling match watching a final flying leap. 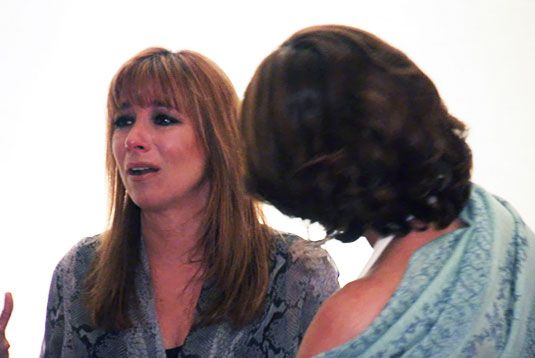 After being a total crazy person last episode, Jill retreated into her shell this time around. “Am I upset about last night? Sure,” she said. “Am I going to let it ruin my vacation? No.” Good call. She was curious on the palace visit and was funny about her hair, and got along with Alex somehow. She even apologized to Ramona one day after saying that they would “NEVER be friends” and calling her a “piece of shit.” And when she compared friendship between women to a marriage, she was pretty on point. 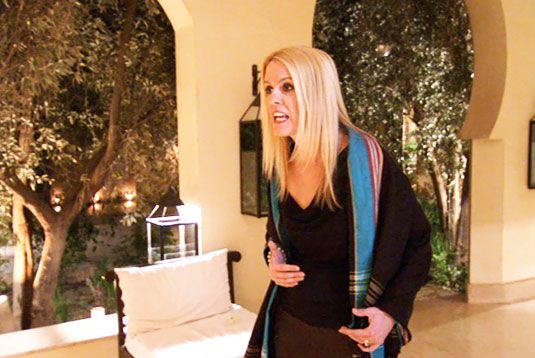 I don’t know what Alex was on this episode. You just want to say to her, “Honey, you’ve finally figured out that hair. Now stop making that FACE.” She had moments of fun this episode, where she was dancing and joking with Jill about concubines. But then once she gets talking to Ramona, she completely loses her mind. Her mistake was to let LuAnn talk her into having a confrontation in front of other people. Once she got going, she just fell apart, hives and all. (Side note: Has there ever been a skin condition better suited to a reality show than hives?) My favorite thing Alex did this episode, and she did it a few times, was to say “Thank you” when someone would say something terrible to her. Like, Kelly tells her, “You’re being crazy weird” and Alex’s response is, “Thank you for telling me that.” It’s not an effective arguing technique, but it is genuinely hilarious.

Ancillary Winners:
All the Restaurants They Go To: Very New York–y and fun!
The Henna Tattoo Artists: Honestly, I’m tempted to hand them the win for the whole episode. The expression on their faces as LuAnn struggles to explain what they do is priceless, and when the fight goes down, it only gets better.
Ida: The tagine situation looked AMAZING.
Simon: At least he knew the wives were in Morocco and not Dubai.

Ancillary Losers:
Mustapha the Tour Guide: Only because of those sunglasses.
Mario: The extremely contrived situation that was carefully crafted to make him look like a douche is something he should have known about.