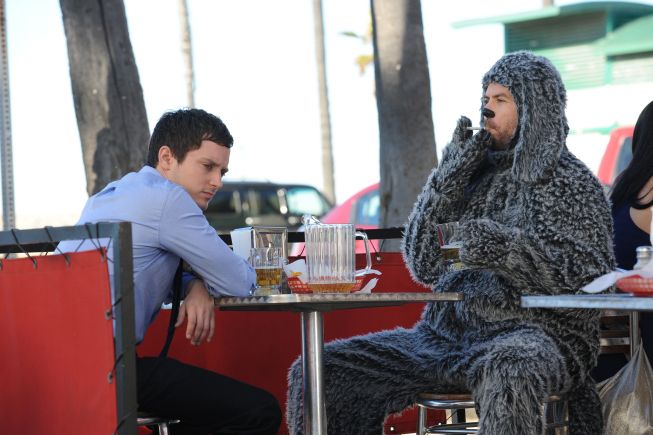 If the perfect life coach for you appeared as a foul-mouthed, pot-smoking Australian in a mangy dog costume, would you quibble with his appearance, or blindly accept his guidance despite it? This is the animating question of Wilfred, the new lackadaisically surreal, amusing if not quite laugh-out-loud funny sitcom premiering tonight on FX. A delightful Elijah Wood, leaving Frodo Baggins in the Shire, stars as Ryan, a lost young man who is considering suicide when he’s introduced to his next-door neighbor’s hound, Wilfred. While the pet looks to everyone else — including his owner — like an adorable pooch, to Ryan he appears as that aforementioned Australian, dispensing digs and wisdom like a potty-mouthed, bitter Oprah. Wilfred behaves like a dog in some respects (he digs holes, humps everything he can, and has an excellent sense of smell) and a dude in others (he drinks beer, smokes weed, uses the computer, and enjoys the films of Matt Damon). Doing either, he’s more macho than Ryan, a meek sweetie pie who can’t stand up for himself. Ryan’s lost his animal instinct, if he ever had it, and he needs an actual animal to help him find it. Together, Ryan and Wilfred, a good boy and a bad dog, a man-child and a half-beast, are an odd couple for the self-help age.

Despite his furry suit, in the canon of imaginary and not-so-imaginary friends, Wilfred shares more with the menacing demonic rabbit in Donnie Darko than with the adorable Snuffleupagus. It’s never quite clear if he has Ryan’s best interests at heart, or if, like some less antic Beetlejuice, he’s just a master at wringing life lessons out of failed pranks. Jason Gann, who plays Wilfred, a part he originated in the much darker Australian version of the series, speaks in a near growl and towers over Wood. His Wilfred is appealingly unpredictable — occasionally joyful and neurotic, but more often deadpan and disgruntled. In the pilot’s raunchiest and most inspired scene, Wilfred motorboats and then humps a waitress, much to Ryan’s discomfort. “Get off,” Ryan screams. “I was trying to!” Wilfred replies, before chastising Ryan for being a “shit wingman.” If you’ve ever imagined your dog’s inner life, you probably weren’t imagining this.

Wilfred is disgusted by Ryan’s lack of manliness, pegging him quickly, and condescendingly, “as a good boy: “You come when you’re called.” Wilfred encourages Ryan to be a man, a state of being that in Wilfred’s estimation involves behaving exactly like Wilfred. Wilfred smokes and drinks all day, doesn’t have a job, does as he pleases, and takes craps in other people’s shoes. Under Wilfred’s guidance, Ryan begins to embrace a life of … smoking weed all day, not having a job, doing as he pleases, and taking craps in other people’s shoes. In tonight’s pilot, Wilfred encourages Ryan to defecate in a misbehaving neighbor’s footwear. Ryan squeals, “I’m not an animal!” Wilfred volleys, “Then be a man!” Ryan lowers his pants.

Unlike in the Apatow comedies, where an overgrown man-child has to learn to embrace responsibility — to tamp down his id and get a life — Wilfred is about an underdeveloped man-child (and former lawyer) who has already had responsibilities, and now has to learn to respect his own desires — he has to loosen up his superego and get a life. As opposed to the spate of male-crisis shows coming to network TV this fall, Wilfred champions the frat-boy ideal of masculinity: not the right to dominate house and wife, but the not entirely unrelated right to get high in your undies in front of the television at three in the afternoon, if you so choose.

Wilfred works to the extent that it can make this, a man’s right to be boorish, seem a reasonable goal, which, surprisingly, it does most of the time. The chemistry between Wood and Gann is aces, and whatever the caliber of Wilfred’s advice, it’s clear Ryan desperately needs it. The seriousness of his predicament — that of a miserable loner unable to figure out how to live an adult life in a fulfilling way — is built into the premise of the show. Not only is Ryan so messed up that he’s suicidal, he’s so messed up he’s talking to a dog. Whether Ryan or some magical powers that be have conjured up Wilfred — a question the show is wisely uninterested in resolving — in either case it’s clear Ryan’s mental health was in a state of emergency. Still, thanks largely to Wood’s innate do-gooderness, there’s never a question of Ryan becoming as wild as Wilfred. Under Wilfred’s tutelage, Ryan may become a man, but he’ll never really be an animal.