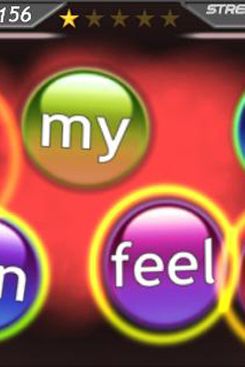 We’re light on gadgets and heavy on apps in this week’s sampling. What follows: a psychedelic videocam, a Broadway tracker, a nostalgic video generator, a lyrical Rock Band, and ringtones for grown-ups.

This is what would happen if Willy Wonka discovered Photoshop filters. Flare turns your iPhone 4’s video camera into a fantasia of technicolor by using something called High Dynamic Range imaging. Some of you have probably been playing with HDR on your iPhone 4’s still camera, which mucks around with the color until you wonder whether you docked your iPhone in acid overnight. But Apple’s built-in software only allows HDR on photos; Flare is the first app that lets you use it in video too. It’s the kind of look that distracts from the actual events happening on screen, which doesn’t make it ideal for most situations. But it’s perfect for the flashback/dream sequence you’ve been working on.PRICE: $2
Broadway’s brilliance is most evident in how it affects its wannabes. Take this season’s finale of Glee. Kurt Hummel and crew are pummeled at their national competition, and yet there’s Hummel back at home in Ohio, telling his boyfriend that it was all worth it because he got to sing on a Broadway stage. In an age of arena tours and YouTube lip dubs, Broadway is one of the few cultural institutions that still manufactures an aspirational relationship with its fans. Which is why we’re telling you about this ILoveNYTheater app. Even if you don’t live in New York and don’t plan to visit anytime soon, you’ll get a little taste of the Great White Way.
The makers of this app should really rename it Procrastinating With the Past. You tell the app what year you want to revisit, along with the category of video (movies, sports, music, etc.), and it’ll queue something up. If you plumb your formative years in sequence, you may disappear down the nostalgic rabbit hole. It’s also worth downloading just to see how different movie trailers were in the 80s. When will the over-dramatic, ham-handed voice-overs become chic again?PRICE: $1
There are more effective ways to market your app than featuring “Twinkle, Twinkle, Little Star” in your demo video. But once you get past that bit of treacle you’ll find a game that’s basically a follow-the-bouncing-ball version of Rock Band. As the song plays you’ll have to tap and hold the lyrics as they’re sung. It’s karaoke without the singing, which makes it a great companion for that karaoke-anywhere app we mentioned last week. The app is free on Android, but unless you want to play with “Twinkle, Twinkle, Little Star”-type ballads, you’ll have to shell out some money for the pop song packs. You can’t expect to touch Gaga’s lyrics for free. PRICE: Free, plus the song packs.
During simpler times in the late aughts, the question for teenagers was not “what phone do you have?” but “what ringtone do you have?” Vulture Bytes can’t forget a family scene in the early aughts involving a daughter and father arguing over whether she could buy one — just one, please please please — ringtone for 99 cents. (The father, long a gadget-phile, but a frugal one, refused on principle.) But because customized ringtones were such a juvenile hobby, they were spoiled for the rest of us. Now, when an iPhone rings in a Brooklyn coffee shop, the entire place looks up at once, dopamine surging in the hope that the call might be for them. So why not try a Cleartone, if only to reclaim ringtones for the post-pubescent. It sounds like a Philip Glass symphony tucked into your pocket — minimalist in all the right ways. One is just about free, and a pack of 50 will run you $10.PRICE: You can download one of four free tones for the cost of turning a tweet into an advertisement.

reunions 6:00 p.m.
New Radicals Fulfill Campaign Promise to Reunite at Biden Inauguration Next step: reuniting the country.
inauguration day 2021 5:43 p.m.
Inauguration Day 2021 Was a Colorful Beam of Light Visually and thematically, Joe Biden and Kamala Harris’s inauguration was suffused with brightness.
vaccine watch 4:20 p.m.
All the Celebrities Who Have Received the COVID-19 Vaccine So wholesome.
By Gabrielle Sanchez
bachelor nation 4:00 p.m.
The Bachelorette’s Clare Crawley Splits From Her Halloween-Costume-Model Fiancé “Obviously, it’s not the greatest situation,” Dale Moss now says.
1.5x speed 3:05 p.m.
How It Happened and 4 More Podcasts Worth Trying Including the end of Trump, Inc.
vulture lists 2:45 p.m.
Megan Amram’s 103 Best Trump Tweets, Ranked Megan Amram has hundreds of great Trump tweets. Here are the best of the best.
By Megh Wright
extremely online 2:06 p.m.
Okay, You Can Unmute @POTUS Now The Twitter handle is under new management.
inauguration day 1:42 p.m.
Return to Normalcy With Some Bernie Sanders Memes The only man who dresses for January, ladies and gentlemen.
bye 1:35 p.m.
Donald Trump Went Out As He Came in: Playing Songs by People Who Hate Him A perfect season-finale moment.
we did it joe 1:07 p.m.
Jennifer Lopez Slips ‘Let’s Get Loud’ Into Her Biden Inauguration Performance A new era indeed.
inauguration day 12:39 p.m.
Watch Lady Gaga Perform the National Anthem at the Biden Inauguration Obama, Biden, Bush, and more attended a one-song Lady Gaga concert today.
inauguration day 12:36 p.m.
Watch Amanda Gorman’s Historic Poetry Reading at the Biden Inauguration “But while democracy can be periodically delayed, it can never be permanently defeated.”
inauguration day 12:32 p.m.
Garth Brooks Turns ‘Amazing Grace’ Into a Sing-along at Biden Inauguration He even took off the hat.
vulture lists 12:30 p.m.
The 20 Best Movies About American Presidents Frost/Nixon, Secret Honor, Lincoln, and more.
bachelor nation 10:58 a.m.
Did Matt James Seriously Just Spoil His Bachelor Winner on … Spotify? Somebody tell this man that his streaming history is public.
lime crime 10:18 a.m.
Dakota Johnson Lied to Us About Loving Limes You can’t spell “limes” without “lies.”
reality tv 10:09 a.m.
Real Housewives of Salt Lake City Will Return for Season 2, Andy Cohen Confirms Keep those Wednesday nights open.
vulture recommends 9:00 a.m.
Call My Agent! Brings a Succession Energy to the Parisian Entertainment Industry The French series offers an alluring new vantage point on the industry-insider machinations we typically associate with Hollywood stories.
last night on late night 2:03 a.m.
Seth Meyers Takes One Last Closer Look at the Trump Presidency “You left the nation in ruins.”
pardon? 12:00 a.m.
Trump Pardons Lil Wayne on His Last Day in Office Along with Kodak Black.
More Stories