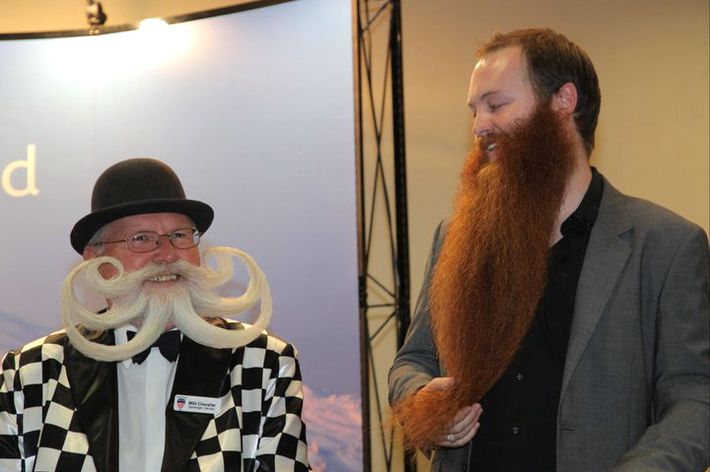 A&E announced its newest series today: American Hoggers, about a family of “hog hunters” who wrangle the wild beasts. “They may be called in to help a farmer save his crops, a scrap yard owner who is being harassed by an aggressive boar or an airport official who is crippled by hogs on the runway; no matter how dangerous the situation, the Campbells are prepared for anything,” says the press release. Apparently, half the wild boars in America live in Texas! Between this, Whisker Wars (pictured), and the multiple taxidermy shows, it seems like just about anything can be turned into a reality show. Can you tell which of these series is real, and which Vulture made up?

1. One Man’s Treasure
Who says there’s no such thing as a free lunch? Dumpster diving grows up with this peek inside the world of New York’s hard-core urban “freecylers,” who scavenge everything from gourmet food to high-end furniture, all from the trash. (IFC)

2. Hillbilly Handfishin
Tourists get wet when they travel to Oklahoma to try catching catfish with their bare hands. It’s called noodling! (Animal Planet)

3. Inkmasters
Who is America’s best tattoo artist? There’s only one way to find out: a reality contest show. (Spike)

4. Beer Man
Climb inside the cutthroat world of beer vendors at Yankee Stadium, where carrying the tray is a badge of honor. (YES Network)

6. Don’t Mess With Texas
Everything’s bigger in Texas — including the cleanup jobs. Enter the Rothman family, whose Amarillo-based company can tidy up anything, from a rodeo venue to an abandoned subdivision. (HGTV)

7. Texas Women
A country singer, a barrel racer, a wild stock contractor, and a party girl — and they’re friends, y’all! In Texas. (CMT)

8. Design My Dog
Dog owners pair up with fashion designers to compete for who can create the best “canine couture.” (Logo)

9. Vision Quest
It’s not just the clothes that make the man; it’s the glasses. And when fashion meets philanthropy, those glasses are probably made by Warby Parker. Get to know the duo behind New York’s newest spex symbols. (Bravo)

11. Pony Up
The Hamptons are home to some of the world’s most competitive dressage athletes, but it’s not just a sport — looks matter as much as technique. The horses aren’t the only ones getting groomed! (Bravo)

12. Moonshiners
Welcome to Appalachia, where the community is close-knit and the booze is homemade. (Discovery)

13. Father of the Bride
Brides-to-be are given the big budgets of their dreams, but with one hitch: They don’t get to plan the wedding themselves. If they want a full to-do, it’s their proud papas who are signing off on everything from linens to bridesmaids dresses. Some dads want to do more than just walk you down the aisle! (TLC)

Can You Tell Which of These Reality Shows Are Real?

memorial 29 mins ago
Husband of Halyna Hutchins, Rust Cinematographer, Speaks on Tragedy American Film Institute has created a scholarship in honor of Hutchins.
overnights 1:39 p.m.
Saturday Night Live Recap: Jason Sudeikis Makes a Sharp Return Jason Sudeikis is a sketch-comedy Swiss Army knife in his SNL-hosting debut.
snl 1:00 p.m.
Kieran Culkin to Host SNL on November 6 Musical guest Ed Sheeran has tested positive for COVID-19.
snl 2:55 a.m.
Jason Sudeikis’s Vance Revives SNL’s ‘What Up With That?’ Along with Kenan Thompson and Fred Armisen.
set updates Yesterday at 7:02 p.m.
The Rookie Commits to Only Using Airsoft Guns, Banning ‘Live’ Guns on Set The decision is in response to the tragedy that happened on Rust.
pharbz rise up Yesterday at 5:17 p.m.
Phoebe Bridgers and Matty Healy Surprise Fans With the Duet of Tumblr’s Dreams *Cries in jean jacket and Doc Martens*
tired (swifties' version) Yesterday at 12:52 p.m.
Taylor Swift Leaves More Clues for TiRED Swifties How can we connect this news to the next four Fridays?
remembrances Yesterday at 7:00 a.m.
The Naomi Shelton We Knew An evening remembering the late Gospel Queen, village voice, and forever friend.
By Saki Knafo
obits Yesterday at 2:31 a.m.
Peter Scolari, Girls and Bosom Buddies Star, Has Died The actor was 66.
explainers Oct. 22, 2021
Everything We Do and Don’t Know About the Fatal Rust Set Shooting The camera crew had reportedly walked off the set to protest work conditions earlier that day.
he's back Oct. 22, 2021
Hayden Christensen Is Reprising His Role As Anakin Skywalker In the live-action Star Wars series Ahsoka, starring Rosario Dawson.
life in plastic Oct. 22, 2021
Ryan Gosling Will Play the Ken to Margot Robbie’s Barbie In the Greta Gerwig movie about the Mattel doll.
obituary Oct. 22, 2021
Remembering the ‘Tireless’ Halyna Hutchins, a Rising Cinematography Star Friends and colleagues recall the cinematographer’s work ethic and artistic eye: “There is no excuse I can accept for this loss.”
By Chris Lee
overnights Oct. 22, 2021
Canada’s Drag Race Recap: Cirque du So Gay Send in the clowns.
follow friday Oct. 22, 2021
Grace Freud Is One of Only 10 Gay People Left on Earth We caught up with the comedian on Instagram Live.
lowkey reminder Oct. 22, 2021
Are the Characters of Insecure Okay?! Going Into Season 5? A brief rundown of who’s killing it and who’s on the verge of a breakdown as the HBO series heads into its final season.
overnights Oct. 22, 2021
I Know What You Did Last Summer Recap: You Got Nothing to Hide Everyone finally recognizes Clara for the obvious murder suspect she is.
tv review Oct. 22, 2021
Insecure Remains Magical and Messy in Its Final Season The series draws to a close with a characteristically effervescent yet uneven exploration of the dynamics of 30-something life.
dunes Oct. 22, 2021
How to Watch Dune, the Year’s Sandiest Movie The sci-fi epic hit HBO Max a day early.
now streaming Oct. 22, 2021
What’s Leaving Netflix: November 2021 Glee, School of Rock, Waterworld, and more.
More Stories