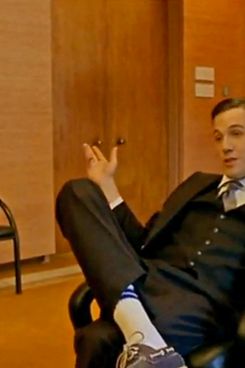 Yesterday, House Majority Whip Kevin McCarthy attempted to psych up his fellow Republicans by playing a clip from The Town during a meeting about the debt debate. This is amusing for several reasons, not least of which because The Town director Ben Affleck is one of the most outspoken liberals Hollywood has to offer, but also because there are plenty of other Ben Affleck scenes that would make for even better Republican viewing. (Affleck even agrees, and told HuffPo, “I don’t know if this is a compliment or the ultimate repudiation — but if they’re going to be watching movies, I think [layoff drama] The Company Men is more appropriate.”) Next time the members of the House assemble for Movie Night, here are seven classic Affleck moments they can watch together, and the right-wing lessons contained therein.

Seven Other Ben Affleck Scenes That Republicans Can Watch for Inspiration

the o group 15 mins ago
Wait, How Many Homes Has Selling Sunset Star Chrishell Stause Sold? “As of June, I think I’ve done seven deals so far in real estate …”
vulture lists 3:00 p.m.
A Ranked Guide to John Wick–Inspired Movies Evaluating the latest generation of stunt-heavy, fist-fighting action movies.
movie nights 3:00 p.m.
Noah Baumbach’s White Noise Will Open This Year’s New York Film Festival Luca Guadagnino’s Bones and All and Maria Schrader’s She Said join the festival’s Spotlight selection.
trailer mix 2:31 p.m.
Cobra Kai Season 5 Trailer: The Valley Is Still at War Netflix’s Karate Kid spinoff premieres with honor on September 9.
remembrance 2:00 p.m.
The Jagged Life of Anne Heche She lived and died like an early Hollywood star who imploded before a grande dame period could get under way.
By Matt Zoller Seitz
lumon+ 1:35 p.m.
You Can Guess What a Book Called Talkin’ and Walken Would Be About Okay, but can you guess who would write it?
switched on pop 1:30 p.m.
Demi Lovato Knows All the Highs and ‘Whoas’ of Pop Punk On “Substance,” she flexes her intimate familiarity with the genre.
dancing through life 1:29 p.m.
Solange Is on Her Way to the Ballet “Very excited to announce i’ve composed an original score for the New York City Ballet 🖤”
overnights 1:26 p.m.
Only Murders in the Building Recap: All Is Not OK in NYC Is identifying a killer harder than sorting out daddy issues? Hard to say.
breakups 12:55 p.m.
Florence Pugh Single! (No, Not Music.) The Don’t Worry Darling star says she quietly separated from Zach Braff this year.
trent stans rise 12:43 p.m.
Never Have I Ever Cast Pitch Their Dream Celebrity Narrator Tony Hawk, the people want a Trent episode!
how to 12:18 p.m.
How to Sing Sondheim Like Sara Bareilles Why the pop singer’s voice was an unusual fit for the Broadway revival of Into the Woods.
By Jackson McHenry
album review 12:06 p.m.
Megan Thee Stallion Takes Control of Her News Cycle Traumazine is a reminder there’s a human on the other side of the headlines.
vulture 10x10 12:00 p.m.
The True Love Puzzle 15-Down, Five Letters: Housing type for Frasier Crane.
coming soon 11:52 a.m.
Succumb to The Lord of the Rings: The Rings of Power Daddy Bezos wants your sweet, sweet attention come September 2.
search for a superstar 11:20 a.m.
The Kelly Clarkson Show Is Doing American Idol for Kellyoke There’s no golden ticket to Hollywood on the line, but you could get featured on the new season.
the need for rewatches 11:08 a.m.
Top Gun: Maverick Finally Flies Onto Digital in a Week But you’ll have to wait a bit for a physical release.
overnights 10:33 a.m.
The Bachelorette Recap: Finally, Man Tears The men have discovered therapy, and they’re not afraid to use it.
last night on late night 10:03 a.m.
Desus Nice Talks About Being Fired by Showtime While Subbing for Kimmel Yerrr, you know what it is, a completely different show on late night.
best of 2022 9:44 a.m.
The Best Horror Novels of 2022 (So Far) In the mood for some transgressive splatterpunk?
More Stories