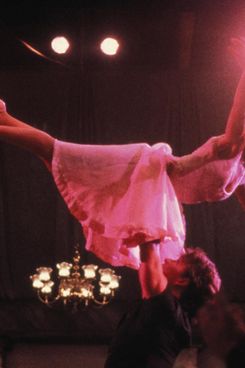 Halfway through the romantic comedy Crazy, Stupid, Love, cocktail bar Lothario Jacob (Ryan Gosling) reveals his secret no-fail seduction move. We won’t give it away except to say that (1) it hinges entirely on the 1987 film Dirty Dancing, and (2) if you’re a lady, it would work on you. Nearly 25 years after its release, Dirty Dancing is experiencing a pop-culture revival — and yet, unlike most campy eighties rom-coms, it never really went away. Here, a timeline tracing the film’s evolution from naughty punch line to universal object of nostalgia.

Dirty Dancing opens in theaters. It’s one of the highest-grossing films of the year, narrowly missing the top ten. (The Witches of Eastwick has it beat by $300K.)
Following the film’s release, the phrase “dirty dancing” becomes a trendy punch line for referring to anything vaguely sexy. In the SNL skit “Dukakis After Dark,” political scandal objects Willie Horton and Donna Rice ask the Democratic presidential candidate to “join us for some dirty dancing.” (He declines.)
Dirty Dancing’s popularity grows exponentially after its VHS release – thanks in part to the teenage girls who were forbidden from seeing it in theaters. Example: Full House’s DJ and Kimmy Gibler plan a “Crazy for Swayze” sleepover around the video.
Even the most-envied fictional teens of the early nineties are obsessed with the film. When uncool Andrea has to move in with her grandmother to stay in Beverly Hills, 90210’s upscale school district, she bemoans her fate – until Brenda, Kelly, and Donna transform the pad into a hip teen hangout with a single Dirty Dancing poster.
Now it’s on to the hagiography stage. E! True Hollywood Story gives the film — described as an “instant classic” — the one-hour behind-the-scenes treatment. New revelations include the fact that Dr. Ruth Westheimer turned down the small role of Mrs. Schumacher (after learning that the character was a thief).
The Gilmore Girls, ahead of the curve with its constant pop-culture references, drops the line “nobody puts baby in a corner” during the season-two cotillion episode.
Patrick Swayze puts his dance pants back on for a cameo in Dirty Dancing: Havana Nights: a “re-imagining” of the original film, based on an entirely unrelated screenplay about an American family in fifties Cuba. Why Lionsgate thought that Dirty Dancing needed more Fidel Castro is still a mystery; the film is a commercial and critical flop.
Just six months later, Veronica Mars titles an episode “Nobody Puts Baby in a Corner.”
A stage musical adaptation of the film opens in London’s West End, after setting a record for advance ticket sales. The show runs for nearly five years and may now be headed to Broadway. Meanwhile, a BBC News article describes the film as “the Star Wars for girls,” provoking inner conflict among women who grew up quoting both Baby and Yoda.
Patrick Swayze dies of pancreatic cancer. Tearful tributes abound, filled with clips of Swayze as Johnny Castle.
Once again, the most enviable teenage girls on TV are in love with the film. On Gossip Girl, Serena opines to Jenny that she wishes she’d waited for the right guy to lose her virginity to – “someone like Patrick Swayze in Dirty Dancing.” Unlike Brenda Walsh, who once went to three video stores to find the movie, Jenny downloads it.

A Timeline of 24 Years of Dirty Dancing Pop-Culture References