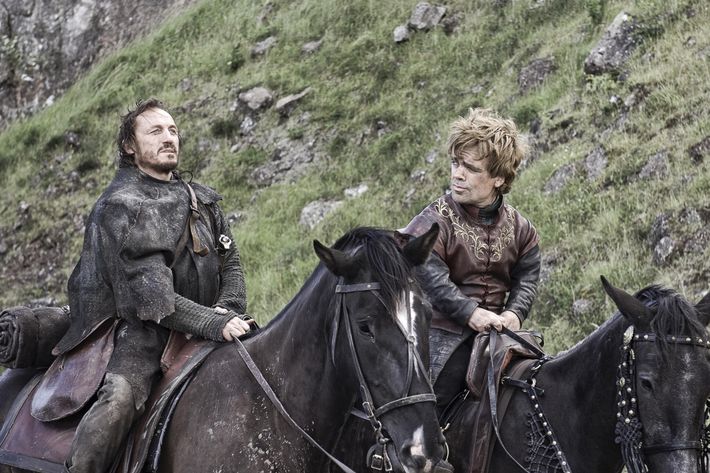 George R.R. Martin fans have been waiting a very long time, gnashing their teeth at seemingly endless publication delays, speculating about the many loose threads and cliffhangers that Martin left us with, and watching his saga go mainstream in spectacular fashion on HBO. But finally, on Monday Tuesday at 12:01 a.m., the fifth book in his Song of Ice and Fire series, A Dance With Dragons, will finally come out. So, if you are one of the Dothraki-like horde that is planning to have the book in hand as soon as is humanly possible, you may need a refresher course of where Martin’s saga left off six years ago with book five four, A Feast for Crows. Where were the major characters? What major mysteries have yet to be resolved? And — since Martin rejoices in killing off major characters (it is known) — who is the most likely to get beheaded, crossbowed, hanged, or otherwise killed off this time around?

I’ve prepared a back-to-school guide for Dance With Dragons (below), but it won’t stop there. Starting on Tuesday, Vulture will be featuring its first Book Recap: For the next few weeks, I’ll be doing regular summaries and commentary on every hundred-pages’ worth of chapters as I (and you) plunge through the book. (They will have spoilers, obviously, so read along at your own pace. And for those of you who have only seen the HBO show, or haven’t read all the way up through A Feast for Crows, proceed no further.)

This man is a little daunted at the prospect of recapping a 1,000-plus-page book (the things I do for love … ), but if these are nearly as much fun as our Newbie/Superfan posts, it will be all worth it. Valar dohaeris.

And now, everything you’ll need to consult before driving to the bookstore at midnight, saying good-bye to your friends and loved ones, and jumping into Dragons:

Where Is Everybody?
It’s been a while! The concurrent narratives of Crows and Dragons mean that we have a lot more recent information about some characters (Cersei, Jamie, Arya) than we do others — can you believe it’s been eleven years since we had POV chapters from Jon, Daenerys, and Tyrion? Tor.com has an exhaustive list of where every character is before A Dance of Dragons begins, which is required reading.

What’s Happened So Far?
If you haven’t gone back and reread the books, and even if you have, the chapter summaries on Tower of the Hand are invaluable as a refresher. There are also extensive maps, timelines, and other helpful reference info to help you keep everything straight. And you might as well just make A Wiki of Ice and Fire your browser homepage right now, for those inevitable “Wait, who is that guy again?” queries.

What do the critics think?
The early reviews are in, and they’re very positive (not to mention spoilery, so be forewarned). Publisher’s Weekly: Recurring motifs suggest that “readers should think strategically, be patient as the story grows, and brace for a beating.” io9: “Both Feast and Dance are about severely damaged people, who have been left insanely dysfunctional as a result of the horrors they suffered in the first three books.” The Daily Beast says it’s “a taut and relentless masterpiece that reaffirms the reader’s obsession with the panoply of unforgettable characters that Martin has created.” And Time’s Lev Grossman, who famously called Martin “the American Tolkien” in 2005, informs us: “I’m happy to report that I was totally right.”

What big questions are still unanswered?
Lots of loose ends, but here are the big two:

Who are Jon Snow’s parents?
The possible answers range from Ned Stark and Wylla the servant girl to (my personal hunch) Rhaegar Targaryen and Lyanna Stark. Lots of discussion at Westeros.org and ASoIaF FAQ, but with plenty of Jon Snow POV chapters, we should know more by the end of Dragons than we do now.

Who is Azor Ahai reborn?
The prophecy says the Prince Who Was Promised will be reborn “when the red star bleeds and the darkness gathers … amidst smoke and salt to wake dragons out of stone.” Melisandre is staking a lot on the fact that it’s dour, peevish, honor-bound Stannis Baratheon (a side note: Which U.S. politician does he remind you of? Time’s Grossman says Al Gore, I was thinking John McCain, but neither one is quite right). But Danerys seems to fit the bill pretty well, and Beric Dondarrion, Sandor Clegane, Davos Seaworth, and even Bran Stark could also be plausible. Once again, expanded theorizing is available at ASoIaF FAQ.

Who’s on death watch? Valar morghulis!
Well, obviously, just about everyone — although fan reports suggest that Martin’s wife, Parris, has told him that he’s not allowed to kill off Arya. Nevertheless! If the series is famous for anything, it’s a willingness to kill fan favorites and upend expectations (see: Stark, Ned; the Red Wedding). When Crows ended, there were many people in life-threatening circumstances: Mance Rayder is facing a death sentence, Brienne is in the process of being hanged, Gregor Clegane is dying from a poisoned wound, and Davos Seaworth is reported to have his head on a spike somewhere. But those are all widely flagged ahead of time. What would really shake things up? One of the big three: Tyrion, Jon, or Danerys. If he really wants to mess with people: Hodor. More speculation is available on this Reddit thread.

And now, back to the book. We’ll meet back here on Monday after your all-nighter.

George R.R. Martin’s A Dance With Dragons: A Prep Guide

sequels 4 mins ago
Disney Confirms That We’re Getting a Shang-Chi Sequel From the Same Director Destin Daniel Cretton is also developing a new MCU series for Disney+.
into the shyamalan-verse 9:02 p.m.
Knock at the Cabin Opens Its Door and Casts Dave Bautista The M. Night Shyamalan movie is set to release on February 3, 2023.
grammys 2022 6:44 p.m.
Drake Is No Longer a Certified Grammy Nominee The rapper withdrew his two nods for Certified Lover Boy and “Way 2 Sexy.”
crime 6:34 p.m.
Man Charged With Murder of Jackie Avant, Wife of Music Exec Clarence Avant 29-year-old Aariel Maynor is allegedly responsible for the fatal December 1 shooting.
something good 6:32 p.m.
There’s a Few Places for Us to Watch, Read, and Listen to West Side Story No need to play it cool.
chat room 6:22 p.m.
Scott Nicholson on Playing Succession’s Only Satisfied Character “I don’t think he has any aspirations to move up because he’s in a very powerful position himself.”
close reads 6:06 p.m.
That Succession Moment Is About a Lot More Than Roman’s ‘Item’ Once you manage to stop cringing, there’s a lot to unpack here.
breakout performances 6:02 p.m.
Annie Live!’s Beard Guy Almost Didn’t Have a Beard Jacob Keith Watson on playing seven roles in the live musical, the rise of Mr. Bundles, and pivoting to sea shanties.
housewives institute bulletin 5:42 p.m.
Jen Shah Is Totally Screwed Between The Housewife and the Shah Shocker, the new RHOC and RHOM, the RHOP reunion, and Porsha’s spinoff, it’s a busy time for the Institute.
overnights 5:39 p.m.
Power Book II: Ghost Recap: Personal Mission So! Many! Lies!
astroworld tragedy 5:33 p.m.
Travis Scott Files for Dismissal in First Legal Response to Astroworld Lawsuits The move comes as attorneys are working to consolidate the 275 current lawsuits against Scott and organizers.
the law 5:00 p.m.
What Happened When Jussie Smollett Took the Stand in his Own Defense The defense alleges the brothers asked Smollett for $1 million each to not testify in the trial.
vulture recommends 4:47 p.m.
Magdalena Bay’s Cinematic Pop Universe May Never Stop Expanding The duo’s debut, Mercurial World, is one of 2021’s best.
By Justin Curto
just asking questions 4:40 p.m.
Drawing Ghislaine Maxwell Talking to courtroom sketch artist Jane Rosenberg about her 40-year-plus career and what it’s like when a defendant illustrates you.
overnights 3:55 p.m.
PEN15 Recap: Lost in Translation Maya’s mom gets a stand-alone episode and a cool, sexy past.
overnights 3:47 p.m.
Yellowstone Recap: That’s Not Your Family John’s old-fashioned ways of doings things seem to be falling short.
balls 3:27 p.m.
The Boys Animated Spinoff Looks Like Junk, Literally They’re going balls to the wall.
rock star & the mole woman 3:15 p.m.
A Timeline of Roman and Gerri’s Succession Sexual Tension For all you disgusting little slime puppies.
who's laughing? 3:09 p.m.
Netflix Is a Joke Festival Lines Up John Mulaney, Pete Davidson, and More Netflix Is a Joke: The Festival is happening in Los Angeles from April 28 to May 8, 2022.
vulture lists 2:45 p.m.
All the Best Sweaters on Succession, Ranked All hail Shiv’s turtlenecks.
More Stories