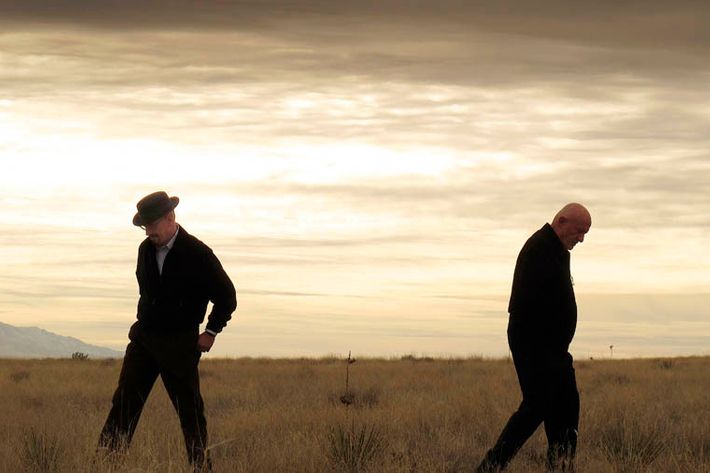 Breaking Bad begins its fourth season on Sunday night. If you’re a highly meticulous person capable of sticking to a long-term plan, you followed the Breaking Bad watching schedule we provided a month ago and have meted three seasons’ worth of episodes out over four weeks. If you are not quite so industrious, it’s possible that six days before the premiere of Breaking Bad’s fourth season you still need to watch … all of Breaking Bad’s first three seasons. (Know we’re not judging: Certain members of the Vulture staff find themselves in this exact position.) This is certainly a daunting amount of television, but before you toss up your hands and decide you’ll catch up on Breaking Bad before season five, hear this: You can still do it. It may involve a Saturday on the couch, skipping a few episodes, butchering others, and such an intense immersion-watching experience that you will soon be dreaming of Walter White and adding a “bitch” to the end of your every sentence, but it can be done — and without methamphetamine! Here’s how.

Wednesday, July 13
Season one, episodes six, seven: “Crazy Handful of Nothin’” and “A No-Rough-Stuff-Type Deal.”
Season two, episodes one, two: “Seven Thirty-Seven” and “Grilled,”
Admittedly, binge-watching on a deadline is not the best way to enjoy a TV show, and the following recommendation reflects that: skip episodes four and five, “Cancer Man” and “Gray Matter.” They’re both excellent episodes that draw out Jesse and Walt’s characters and their family dynamics in essential, interesting ways, but we’re trying to get you to a place where you are excited to watch the first episode of season four and all caught up on the plot. The more nuanced, slower episodes have to get the shaft. You can circle back to them later, when you have time for the emo stuff. Tonight, watch the final two episodes of season one, “Crazy Handful of Nothin’” and “A No-Rough-Stuff-Type Deal,” in which Walt’s badassery starts to border on the deranged and you are introduced to an important psycho known as Tuco. Keep going (there are no cliff-hangers on DVD!), and power through the first two episodes of season two, “Seven Thirty-Seven” and “Grilled,” the last of which is an insanely tense, action episode. Stop there, even though you will want to keep going, just to collect yourself.

Thursday, July 14
Season two, episode three: “Bit by a Dead Bee,” but just the first half (approximately 20 minutes)
Season two, episode four: “Down”, but just the Jesse Pinkman parts (approximately fifteen minutes)
Season two, episode six, eight: “Peekaboo,” “Better Call Saul.”
Time is limited. We are about to recommend some heartless triage. You have to watch the first half of the next episode, “Bit by a Dead Bee,” to see Walt and Jesse explain what went down in “Grilled” to their loved ones, because it’s important for the rest of the series. Once you get the gist — and this hurts us to say — skip to the next episode, “Down.” Fast-forward through all of the parts of “Down” that do not have to do with Jesse. It’s not that anything so serious happens to him, but the extremely depressing situation he finds himself in for this episode is one of the most pathetic stretches in the whole series, and you will probably have a full-body empathic reaction to it, and, also, learn to love Aaron Paul/Jesse Pinkman if you don’t already. It should only take about ten to fifteen minutes. Skip episode five, “Breakage,” even though it is important to learning about Hank’s character and who Jane (Krysten Ritter) is (you can read about it here, or just watch the parts of that episode in which Hank and Ritter appear). Do make yourself watch the horrifying “Peekaboo,” in which Jesse deals with some methheads and Walt’s marriage gets even more complicated. Skip episode seven, “Negro y Azul,” but look up “Tortuga” before going on to the next one. Watch, in its entirety, “Better Call Saul,” which introduces Bob Odenkirk’s character, and go to bed laughing.

Friday, July 15
Season two, episodes nine, eleven, twelve, thirteen: “4 Days Out, “Mandala,” “Phoenix,” and “ABQ”
Season three, episode one: “No Mas”
The weekend! You can now stay up absurdly late watching TV. And you’re going to have to. Start with episode nine, “4 Days Out,” Breaking Bad’s very own, very great bottle episode. Skip number ten, “Over,” (though not if you want to see Walt hit his parenting low), but strap in for the final three episodes of the season, “Mandala,” “Phoenix,” and “ABQ,” which are wonderful and sad and depressing and will change your feelings about Walt permanently. You’ve hit season three! Just to make some headway, watch the first episode of the new season.

Saturday, July 16
Morning Session: season three, episodes two, three, five, six: “Caballo Sin Nombre,” “I.F.T,” “Mas,” “Sunset”
Afternoon/Evening Session: season three, episodes seven, eight, nine: “One Minute,” “I See You,” “Kafkaesque”
Get comfy on the sofa, this is gonna be a long day. Start with episodes two and three, which are extremely action heavy if you consider Who’s Afraid of Virginia Woolf? a certain kind of action movie. Skip episode four, as Walt deals with his personal life and not his drug-making. Watch episode five to prepare yourself for the happenings in episode six, “Sunset,” which is a doozy. Not only will it introduce you to the the best coffee and meth-making super-nerd on the planet, but after the episode is over you will actually need to get up and walk around to get your pulse rate back to normal. Go to brunch. Come back and watch episode seven, at the end of which you will definitely need to go for a walk again, but since you won’t be able to bear not finding out what happens next, just give in and watch episodes eight and nine right away.

Sunday, July 17
Season three, episodes eleven, twelve, thirteen: “Abiquiu,” “Half Measures,” “Full Measure”
You got this: skip episode ten, “The Fly,” which some people loved and some people hated, but in which nothing happens except emotions. Whir through the final three episodes of the season, which you can do in about two hours, much of which you’ll be breathless for. Take a minute to congratulate yourself. Tell your loved ones you are once again a regular person, available to see and be seen. Go enjoy the rest of your Sunday.

A Guide to Catching Up on Breaking Bad Before Season Four: The Binge Watch Edition