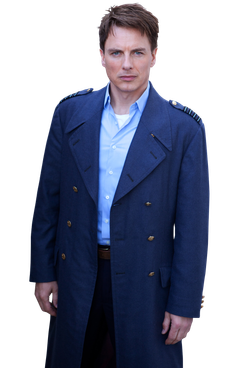 After six years as the Doctor Who universe’s token Yankee, John Barrowman is coming to America. Torchwood: Miracle Day (a Starz/BBC co-production) brings the U.K. alien-investigation drama Stateside, with Barrowman’s swaggering, omnisexual time-traveler Captain Jack Harkness engaged by the CIA to determine why people are no longer dying. In this fourth installment, Torchwood has evolved into something less Doctor Who and more Battlestar Galactica: a bleak, high-tension sci-fi thriller. For Barrowman, it’s the role of a lifetime, not least of all because he’s channeled his U.K. fame into a virtual one-man entertainment franchise. The actor-singer-dancer is a popular British-TV host, theatrical star, and cabaret performer, as well as an outspoken role model for handsome gay actors everywhere. Vulture spoke to Barrowman about Captain Jack’s revitalized sex life, Torchwood’s darker direction, the big gay secret of Hollywood, and whether the actor missed a golden opportunity by doing sci-fi in the age of Glee.

Miracle Day feels darker than Torchwood has ever been.
This is for all the fans who have been with us since the beginning, who are worried that Torchwood would be different: It isn’t going to be watered down. It’s actually going to be darker, bigger and bolder, and more dramatic. I mean, for goodness’ sake, we’ve got a main character [played by Bill Pullman] who’s a pedophile! The interesting thing about that is that the audience is going to be torn, because they’re going to not like him for what he’s done — but they’re gonna like him.

I want to share a recent news headline with you: “John Barrowman Promises Full Man Sex in Torchwood.”
Absolutely. And it’s not me who just promises it, the writers wrote it, so it’s not like “John Barrowman says we’re having MAN SEX” and it’s put in the script — it was there! It was given to me first, so it was like a gift. But yeah, men have sex together and so do women, and it’s about time that we show full-on man sex on television [Laughs.] I’m glad that made a headline. That’s brilliant!

So let’s talk about Jack Harkness’s sexuality then. We know he’s had relationships with women in the past, but in the new series, he comes off as straightforwardly gay. Do you think he could love a woman at this point?
I think he could love a woman, and I know he has loved a woman in the past because he had a daughter, so that child was born of love. He loves Gwen Cooper, but not in a sexual way. This is my personal opinion, but I don’t think Gwen and Jack would ever get together sexually. That’s not to say that Jack won’t have any other relationships with other women. But in this series, he’s just doing it with men. Woo!

One thing I noticed about the new series is that it remains fairly earthbound. Are we going to see any pterodactyls?
You know, every year Torchwood has become something a little different than it was before. It’s still sci-fi, but it doesn’t just deal with spaceships and aliens all the time, because we’ve done that. Our science fiction is more psychological. Our sister show, Doctor Who, is the one that does that: talking cats and cybermen and Daleks. Which is brilliant. But we’re something completely different now. That’s not to say that it will never happen.

Do you ever worry about being killed off?
Uhh, no, because there couldn’t be a Torchwood [organization] without Captain Jack. That’s the bottom line. If the time comes when it’s time for him to leave — they couldn’t kill him. They have to wait until he’s the Face of Boe before he dies.

So you know you’ve got time.
Right. [Laughs.] There is that! I’ve always said if the show changed to the point where I didn’t believe in it anymore, obviously I would have to move on. But I love Captain Jack, I love playing the character, I love the show, I love what it stands for, and I will play this character as long as I possibly can.

And yet it’s funny that you got involved in this sci-fi show right before this musical-theater-show trend kicked off. Do you ever kind of kick yourself that you’re missing the chance to do something like Glee or Smash?
You know what, I don’t, because I don’t live my life that way. I don’t regret. And I’m so pleased that musical theater is getting its time. I hope one day that maybe I’d be able to be involved in one of them, because my contractual obligation for Torchwood only says I can’t do another drama — it doesn’t say I can’t do a musical! So who knows?

You have been somewhat of a pioneer, being a strong-leading-man type who was never really in the closet. Do you think it’s any easier now for gay actors than it was when you got started?
I can only base it on what I know. And it’s been no problem whatsoever, because I haven’t allowed it to be a problem. I’m not saying people have to be out. If there’s an emotional reason why somebody’s not out, that’s a different story. But if you think it’s because you’ll lose your job, then you really have to kick yourself up the ass and think again. If you’ve been living a lie for a long time, it’s even harder to come out. And I know people who are living that lie as we speak, A-listers, B-listers who are pretending to have wives and be married. And if that’s what they want to do, that’s fine, but it can’t be happy, it can’t be healthy. I’ve never had to hide who I am. And if somebody tells me that I’m not going to get a job because of who I am, which I have really no control over, I turn around and say, “Well, fuck you, I’m going to change that.”

What would you say to an actor who is questioning whether to come out?
You are the one who has to make that decision. But don’t negate other people who don’t live a lie, and don’t try to make it like they can’t play a character because of who they are at home or in bed with their partner, because it makes no difference and has no relevance. Because I will say this: Half of the straight actors who are playing straight characters in Hollywood are actually gay. I’m not pointing any fingers, but it would just make things a lot easier if everybody was who they are. As Gaga would say, you were born this way.

summer renaissance 9:13 a.m.
Move Out the Way, Beyoncé Is Taking Renaissance on Tour Good luck cuffing those tickets.
sound thinking 9:00 a.m.
Netflix Adds a Shiny New Audio Option for Top-Paying Subscribers More bang for your buck, even on crappy laptop speakers.
respect the classics 8:15 a.m.
Billy Joel Led the Campaign for Warren Zevon’s Rock Hall Nomination “If anyone deserves to be, he does. He was a real original, and I don’t know if that’s appreciated enough.”
respect the classics 8:07 a.m.
Cyndi Lauper and Willie Nelson Lead 2023 Rock Hall of Fame Nominees 14 artists made the shortlist, connecting every genre of music.
the industry 8:00 a.m.
Reality Check The boom — or glut — in television documentaries has sparked a reckoning among filmmakers and their subjects.
By Reeves Wiedeman
overnights 6:01 a.m.
The Bad Batch Recap: Star Wars Does Pandora Eywa has heard the wookiees’ prayers.
that 90s show 2:13 a.m.
Ashton Kutcher on Danny Masterson’s Trial: ‘Ultimately, I Can’t Know’ The That ’90s Show actor discusses his former co-star’s upcoming trial in March.
oscars 2023 Yesterday at 11:41 p.m.
The Academy Subtweets Andrea Riseborough’s Friends in Statement According to the Academy, Riseborough will keep her nomination.
coming soon Yesterday at 11:09 p.m.
Robert Pattinson Bringing More Eyeliner to The Batman Part II He will face his next villain, makeup remover, in 2025.
can't stream my poker face Yesterday at 10:41 p.m.
Did You Wait to Watch Poker Face? It Might Cost You New Peacock subscribers will have to pay for the service and no we’re not bluffing.
overnights Yesterday at 10:01 p.m.
Below Deck Adventure Season-Finale Recap: Fjord Explorer The crew tries to get their act together for the last charter, but it’s too late.
the vulture spot Yesterday at 7:38 p.m.
Harry Hamlin and His Stylish Jackets Are Magical on Mayfair Witches  Despite his character not having any powers.
trailer mix Yesterday at 6:18 p.m.
We Support Women’s Right to Electrocute Toni Collette and Auli’i Cravalho don’t know what to do with The Power.
ask an expert Yesterday at 5:42 p.m.
Alec Baldwin Is Officially Charged in Rust Shooting. Now What? “There’s just a huge disparity in the charges.”
oscars bad boy Yesterday at 5:28 p.m.
Will Smith Is Back for His Movie-Star Bag With Bad Boys 4 Smith and Martin Lawrence ride together, make movies that make money together.
for your consideration Yesterday at 5:15 p.m.
A Timeline of Andrea Riseborough’s Controversial Oscar Nomination Within seven days, Andrea Riseborough’s performance in To Leslie went from obscurity to the toast of Twitter. And all it took was a few famous fans.
By Nate Jones
crime Yesterday at 5:08 p.m.
Alec Baldwin Charged With ‘Directly’ Causing Rust Shooting Prosecutors allege “no less than a dozen” negligent acts by Baldwin even before Halyna Hutchins was shot.
vulture sports Yesterday at 4:48 p.m.
The Oscars Bestow a Bounty of Points Upon the Movies Fantasy League Awards season is hitting its stride, and so are the top MFL teams.
bravo encore Yesterday at 4:38 p.m.
What’s Going on With RHONY: Legacy? Is she “dead”?
gods and monsters Yesterday at 4:07 p.m.
Chapter 1: Everything We Know About the Future of the DC Universe Congrats to Viola Davis, who remains the most unscathed DC Universe actor.
More Stories