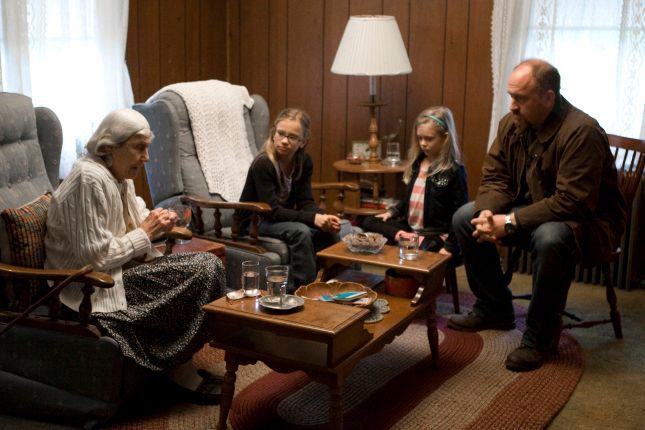 Last week, Louie received multiple Emmy nominations, including a surprising nod in the Best Comedy Actor category for Louis C.K. himself. Now, we all know that awards shows are nothing more than tackily moribund displays of self-satisfaction, and that they exist mostly to reward the rich, promote multinational conglomerations, and spawn hilarious animated GIFS. Still, it made me happy to see a show like Louie — which is about as auteur-driven as TV can get — get some industry recognition, if only because it could encourage more networks to be a little more daring, and a little less meddlesome. Plus, if the show wins Best Comedy Writing, it’ll be for an episode about circle jerks and monkey sex, which gives everyone something to root for.

And while we’re doling out kudos, let’s take a few minutes to recognize the lesser-known scene-stealers of last night’s installment, “Country Drive”: That’d be Hadley Delany and Ursula Parker, who play Louie’s oft-curious (yet largely unflappable) preteen daughters. Considering how notoriously hard it can be to get kids to fall in line — a subject C.K. deals with frequently onstage — it’s remarkable how consistently honest these performances feel, with no moppet-like mugging or robotic line-reading. They’re believable kids, and in an episode as subtle as “Country Drive,” that kind of believability comes in handy.

“Country” opens with Louie and the girls on the road, stuck in traffic on the way to rural Pennsylvania, where they’re visiting Louie’s Great-Aunt Ellen. The kids complain of being bored, which dad quickly shuts down with existential logic: “’I’m bored’ is a useless thing to say,” he tells them. “The fact that you’re alive is amazing. So you don’t get to be bored.” He’s taking them to meet the 97-year-old Ellen so that they might learn something about history. ”There’s nothing like having somebody in your life who can give you that connection to another generation,” he says.

All of a sudden, the Who’s “Who Are You” comes on the radio, prompting the fortysomething dad to shake his head, bite his lips, and drum his steering wheel for the entire length of the song. It’s a rare chance to see Louie truly cut loose, lost in a sing-along reverie, connecting to a song that he likely heard from the backseat when he was growing up. The girls stare at their old man in amusement and bewilderment. There’s nothing like having somebody in your life who can give you that connection to another generation.

Louie stops for gas, and while he pumps, spots two nattily attired, stone-faced twins standing against a wall, looking as though they’re hoping to be cast in a Wes Anderson movie about a dying gas-station patriarch (suggested title: The Quizzical Quibbles of Dr. Patrick P. Pumpswell). They then arrive at Ellen’s dreary-looking cottage, where they find an elderly woman sitting in her living room, unable to hear the front door. When she eventually greets Louie and his brood, she asks about his wife. “We’re divorced,” Louie explains, causing a flash of disapproval across Ellen’s face.

Her house is done up in a style best described as Geriatric Chic: Lots of brown, little light, and a cupboard full of dirty dishes. The family makes some awkward chitchat, and then Ellen finally offers them something to eat: “Would you like to have a niggertoe?” she asks, much to Louie’s surprise. (According to Urbandictionary.com, “niggertoe” is ugly slang for a type of Brazilian nut; on a somewhat related note, my Google search history is now ten times more racist and legume-focused than it was before watching this episode.) Once Ellen finds out the family lives in New York City, the conversation only get uglier: “Oh, my — that’s no place for two young girls! There’s nothing but niggers. And even worse today, I hear.” Even though Old People Saying Offensive Things is a tried-and-true comedic trope by now, Ellen’s comments still come as a shock, in part because she’s not a caricature — all of her old-lady trappings and mannerisms are convincing, all the way down to her deeply felt racism.

She gets up to fetch some cookies, and the kids grill dad on why Ellen’s offensive language is allowed to go unremarked upon. ”I don’t want you to upset her,” he says. “She’s from a different time.” But when the kids point out that they’ve come to ask questions and learn about the past, Louie, struck by their youthful pragmatism, admits he’s wrong. “When she comes back,” he says, “You can ask her whatever you want.” Alas, there’ll be no Q&A session today: When he goes to the kitchen to check on Ellen, he finds her dead on the floor, a slight smile on her face.

The episode concludes not with a daddy-daughters rumination on the meaning of life and death, but with Louie onstage at Carolines, talking about the difficulties of reading Tom Sawyer to his kids, particularly the chapter featuring that “dirty little homeless white-trash creep” named Huckleberry Finn .“I can’t sit on my daughter’s bed and just say nigger all night and then put her to sleep,” he says, segueing into a bit on how America will always struggle with its troubled history. “How do you cope with shit in your past?” he asks, noting that he has his own regrets: “When I was 8 years old, I showed my penis to a girl with Down syndrome that lived down the street. And I’ve got to walk around living with that every day.” It’s a crass but fitting endnote — a reminder that, for all our supposed progress, we’ll always be stuck in the past somehow, whether it’s in our behavior or our mindset. We may not be as backwards as Ellen, but in our way, we’re all a little nuts.

Louie Recap: Who Are You?