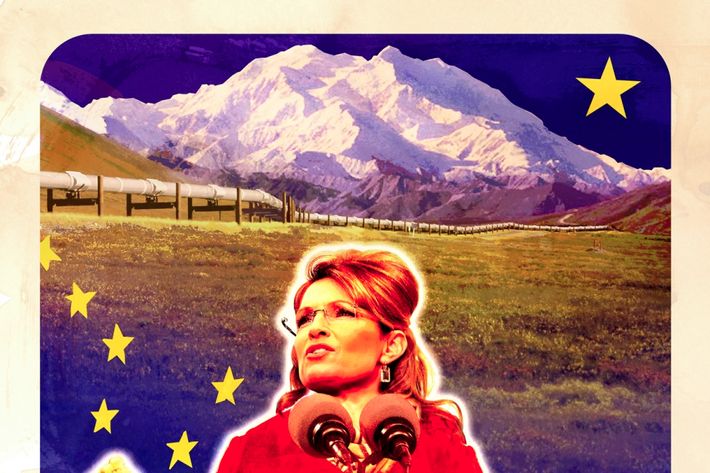 Given that The Undefeated is a clamorous, two-hour political infomercial for Sarah Palin and her (to my mind, inevitable) presidential run, I have to ask: Why, since the film is scheduled to open only in Palin-friendly cities like Dallas, Oklahoma City, Kansas City, and San Diego, was it specially screened for critics like me in NYC and L.A.? My guess is that we’re looking at a twofold strategy born of desperation. First, reviews in major publications will force Palin back into the conversation of coastal “elites,” now spending all their time mulling over Michele Bachmann and her swishy homophobic husband. Second, our presumed ridicule will be red meat for Palin loyalists, paid and unpaid, who’ll be spurred to come together yet again in the face of a common enemy. Andrew Breitbart, who looms large in The Undefeated’s last third (and has boasted of seeing it three times), proclaims Palin “an existential threat to liberals.” So they’ll read bad reviews and grow increasingly enraged and buy tickets — which will weaken us, the way every smashed horcrux weakens Voldemort, and we’ll fade away, gasping, “Curse you, Sarah Paaarrrrrrggghhh … ”

This is, of course, the playbook that Palin has been using — by design or instinct or, more likely, both — since she burst onto the Wasilla scene, riling up the mob against those who oppose her decency and authenticity and the way she stands up for “ordinary workin’ folks.” The prologue and coda of The Undefeated spell out the film’s agenda. It begins with an ugly, fractured montage of Palin’s critics, from, as a title card reminds us, the “corrupt tree [that] bringeth forth evil.” Here are Bill Maher, David Letterman, Madonna, Roseanne, and other godless degenerates using gutter language to describe a woman whom we then see, behind the credits, as a radiant child in a church choir. The coda is more protracted: a hymn to the tea party and the woman who was tea party before there was a tea party, that “natural organic movement of the American people” that’s also an existential threat to the liberal elite. As head cheerleader, Breitbart knows it’s less important to celebrate his heroine than emasculate her opponents, who in this case include the Republican establishment, those old white men who stand back while Palin is attacked. “Where is their sense of chivalry?” sputters the knight who destroyed the career of Shirley Sherrod with a mendaciously edited video. “I see eunuchs,” he sneers, repeating the word twice more to make certain it hits home. This is a man with an eye for wieners.

I swear I gave The Undefeated a chance, because who wants to writhe in agony for two hours? I hoped that director Stephen K. Bannon would show a side of Sarah Palin I’d never seen — I thought it would be so cool if I could give the movie a rave. But it’s a straight hagiography, without nuance or ambiguity or the admission of opposing viewpoints, even those meant to be dismantled. The orchestra never rests, delivering climax after climax as Palin’s triumphs are recounted by her remaining loyalists, each waist-high in the frame so we can see them rocking with excitement. Palin’s contributions come straight from the audio version of her ghostwritten memoir, Going Rogue, which means she’s fluid and precise, her syntax secure, her knowledge untested by gotcha questions that are, as some have pointed out, all questions for which her answers haven’t been prepared in advance.

Here are the salient points. After the Exxon Valdez spill, for which no one held the corporate giant accountable, Palin makes herself an enemy of businesses that victimize ordinary, hardworking Alaskans, white and native. That often means running against her own party — but Alaskans are independent types, living as they do in that last frontier so close to God. Palin is a student of kitchen-table economics, which is why as mayor of Wasilla she brings in all kinds of stores like Wal-Mart to employ ordinary, hardworking people while respecting the natural environment. She goes on to confront big oil lobbyists and bring down the worst of them. Like David and his five stones, she vanquishes Goliath and wins the governorship with no political establishment behind her, solely on the strength of her ideas and her commitment to ordinary, hardworking people. Mrs. Palin goes to Juneau as Jimmy Stewart as Mr. Smith went to Washington to fight for the people against entrenched evil, and the first 90 days bring relentless and dizzying reform that makes her a heroine in and outside her state. Anointed as a running mate by John McCain, Palin dazzles her party and the nation with her authenticity, lifting McCain’s poll numbers past those of Obama and Biden for the first time — until, suddenly, the market crashes, McCain announces he’s suspending his campaign to fix the economy, and the Republican presidential ticket is suddenly yoked to a hapless-looking George W. Bush. Back home in Alaska, the Undefeated One is bombarded with frivolous ethics charges as part of an organized strategy to bring her down by left-wing activists. Putting her love of Alaska first, she resigns the governorship, a heroic act of self-abnegation. But nothing can stop Sarah Palin from leading a national charge on behalf of ordinary, hardworking Americans threatened by the current administration with the loss of vital liberty. She will protect the U.S. Constitution.

Bannon does omit some stuff. We get, for example, Palin’s five stones but not her five colleges. Her husband’s separatist affiliations go unmentioned, along with his role behind the scenes in her administration. Triumphal clips of her vice-presidential nomination speech do not include her most famous line (and lie), that she said no to the Bridge to Nowhere. There’s no reference to seeing Russia from her house or her inability to name a single Supreme Court decision other than Roe v. Wade. Don’t expect to hear about her firing of the Alaska Public Safety director who refused to dump Palin’s ex-brother-in-law, who was involved in a child-custody dispute with Palin’s sister … or the bi-partisan commission that found she’d flouted state ethics rules … or her final days as governor, when a huge majority of ordinary, hardworking people disapproved of the job she was doing.

It’s not, let me repeat, that Bannon disputes specific allegations — it’s that he doesn’t mention them, except in general terms as part of a liberal-activist conspiracy. Instead, we get a handful of scary motifs to characterize her opponents, among them smoke-filled rooms in which white men puff on big cigars and dollar bills are set on fire or go swirling down the toilet. We get a vision of Obama’s America in which freedom itself is under threat. For the base, I suppose, that will be enough, and not-nice words from folks like me will only make the package more attractive. You can almost hear them: “Can you imagine if those New York libs had liked it? Then I’d be worried!”

Toward the end, one of Palin’s cheerleaders describes her as a tiger that “charges into danger.” The problem is that Palin is the most sheltered of all modern political candidates, fearful of holding a simple press conference, ever-protected by the friendly folks at the Fox News Network. Trying to make her look fearless while omitting anything that could ding her mask of righteous certainty, The Undefeated makes Sarah Palin look eminently defeatable.