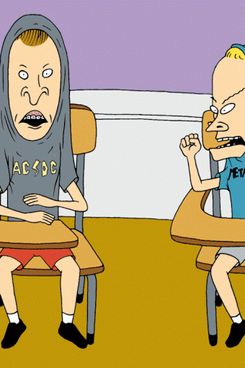 Tonight MTV debuts Awkward, a half-hour dramedy about a teen girl (Ashley Rickards) battling rumors she tried to kill herself following a random accident (think of it as My So-Called Suicide). It’s the cable network’s fourth stab at scripted fare in thirteen months, joining The Hard Times of R.J. Berger, Skins and Teen Wolf in a clearly articulated strategy of programming relatively big-budget YA series in the same league as those on ABC Family and the CW (MTV cannot live on Snooki alone, apparently). But this recent wave of scripted series is hardly the first time MTV has ventured beyond the safety of music videos and “unscripted” reality shows. The network’s efforts at taking the “music” out of “music television” diversification actually began just after the MTV moon-man blasted off 30 years ago, on Aug. 1, 1981. While there were numerous flops, there was also a surprising amount of legitimately awesome entertainment served up by the network in its earliest years. Step into Vulture’s Wayback Machine, won’t you?, as we trace the evolution of the MTV scripted series. (Warning: Readers with allergies to ‘80s and ‘90s nostalgia should proceed with caution. Also, Vulture cannot be held responsible for any Julie Brown or “Weird” Al lyrics that might become stuck in your head as a result of this story.)

From Weird Al to Beavis to Undressed: A History Lesson on MTV’s Scripted Shows