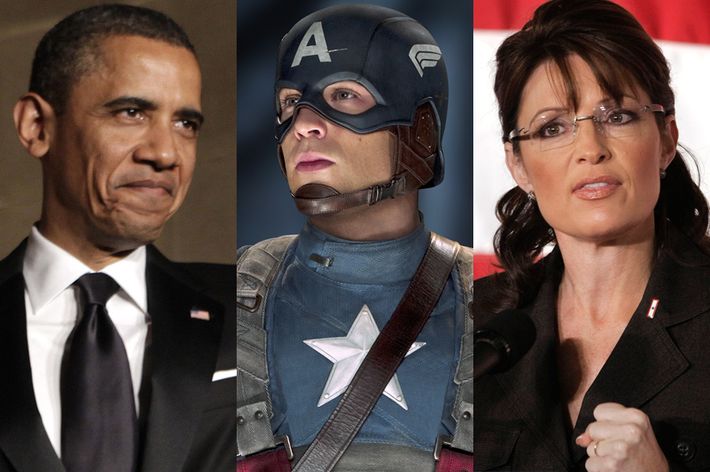 A curious fact about this summer’s superheroes up to now: they’ve all been aliens. Thor’s a god from a mythical, mystical plane way up in outer space; Professor Xavier is a foreign national; Magneto’s European; the American Hal Jordan throws in with the aliens and their magic ring technology every time he becomes the Green Lantern; even the Transformers come from another planet. Given the profusion of foreign superheroes, it’s a relief to see that, as of this weekend, a true blue American will finally be given the opportunity to blow things up on a movie screen. Captain America arrives in theaters tomorrow, pure of heart, draped in flag colors, and out to save the world from bad guys so bad they’re more evil than standard issue Nazis. But just how patriotic is Captain America, really? It’s easy to be more American than that Asgardian Thor, but how does Steve Rogers compare to folks whose job it is to appear patriotic? People like, say, Sarah Palin and President Obama? Let’s see!

How Committed Are They to Wearing the American Flag at All Times?
Sarah Palin: Typically wears at least a flag pin, when not posing with, or in, the flag.
Barack Obama: Notorious flag-pin flip-flopper.
Captain America: So committed to the flag that he has it embossed on his shield and wears it into battle; the fact that it serves as a huge, American bullseye be damned.
Winner: Captain America

Have They Ever Lied About Their Birth Certificate?
Sarah Palin: No.
Barack Obama: Guys. No!
Captain America: At least 5 times.
Winner: Barack Obama (This should be a tie, but extra points to Barry for having to put up with all the nonsense.)

Best Able to Defend America With Their Bare Hands
Sarah Palin: She is a runner.
Barack Obama: He does look fit in a bathing suit.
Captain America: But not this fit.
Winner: Captain America

How Pro-America Is Their Cinematic Propaganda?
Sarah Palin: In her recently released feature-length documentary, Sarah Palin rails against liberals.
Barack Obama: In his 30-minute infomercial, aired before the 2008 presidential election, Barack Obama convinced people he was not scary.
Captain America: In his movie within a movie, played for American audiences during WWII, Captain America fought Nazis and killed Hitler.
Winner: Captain America

How Much Time Have They Spent Overseas?
Sarah Palin: Very little.
Barack Obama: He was born there, right?
Captain America: Fought a war there.
Winner: Sarah Palin

Do They Sound Patriotic?
Sarah Palin: “You betchya.”
Barack Obama: Well, “The arc of the moral universe is long but it bends towards justice.”
Captain America: “I don’t want to kill anyone. I just don’t like bullies.”
Winner: Captain America, keeping it simple but not that stupid.

Who Is The Most Patriotic: Sarah Palin, President Obama, or Captain America?