There Arose Such a Clatter
Season 3 Episode 10 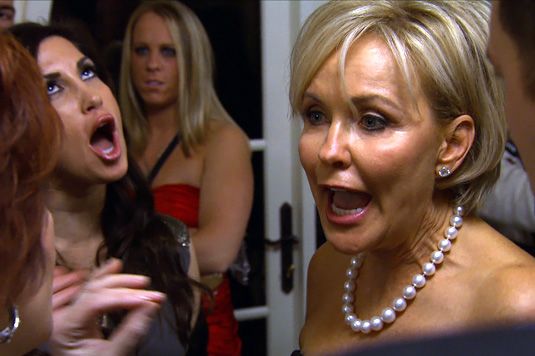 You know all the times you were convinced your mom was the most embarrassing mom in the world? Those times she smoothed down your hair with her spit and pulled back your bangs to show the neighbors the extent of your forehead acne? Well, get on the phone after you’ve finished reading this recap and thank your mama for not being Kim G., because I’m guessing your best friend has never had to throw your mom out of a formal Christmas party for being a gigantic pain in the ass.

Joe tries to diffuse the tension at the party by motorboating one female guest on the dance floor while grinding against two others, but Kim G. is busy stirring up a pot of piping hot shit in the kitchen. She’s continuing to go on about how Teresa was the one who wronged Monica Chacon, pugilist-slash-attorney, and Kathy is hanging on every word, doing a terrible job of pretending not to love it. Meanwhile, Teresa’s just a granite island away, saying that Kim “looks like a fucking duck with those lips,” which is less an insult than a lazy observation.

Lauren Manzo wins points when she’s the first one to go over to Kim G. and tell her to shut her bill — Caroline would have done the honors, but she’s busy trying to stare a bullet hole between Kim’s eyes. And oh, how I have missed that face! That is the face that we haven’t seen since Danielle Staub ran off to go torture Heidi Montag on the hilariously named Famous Food (if that cast is “famous,” then Joe Gorga is “sober”). That is the face that comes right before, “Let me tell you something about my family: We’re as thick as thieves.” Caroline interviews that everything in her mind went “red” in that moment, and if you can remember how nuts the color makes Joe Gorga, then just picture that agitation multiplied by a sixtyish blonde hellion with a big dent in the back of her head.

“You came with the intent to hurt,” Caroline says like a boss, her cheeks puffing as if they’re stuffed with orange slices. Out of nowhere, Christoper Manzo decides he’s suddenly going to be useful and pulls Kim G. out of the Gorga mansion, yelling at her bodyguard (who’s like Kevin Costner in ten years after a whole lotta alfredo) to stay back because he’s going to handle this. Out on the driveway, Christopher calmly lectures Kim about her lack of respect and inexcusable behavior. When the guy who finds nothing more delightful than throwing sliced ham at cabinetry is the mature one in the discussion, then you know it’s time to reevaluate some of the choices you’re making in life. But no, Kim argues back, and then playboy-slash-not-attorney Albie is running over to yell, “That’s enough!” as he ushers his brother back into the marble halls of Gorga castle. Ashley snipes at Kim G. that she’s “just like Danielle,” which is the smartest thing she’s ever said, and if this were Shirley Jackson’s lottery, this is the point at which the Manzo-Lauritas would pry rocks from the entryway and stone Kim G. to death. As it is, she escapes in her Towncar while Teresa and Joe Giudice watch from the valet. They’re going to exact their revenge by going home and making “love,” Teresa promising that Joe will soon be playing with his “toys.” He shoots a look at his wife’s breasts, but maybe that’s just where she stores his vibrating cock ring?

Back inside, the Manzo-Lauritas are thick as a family that meets in a secret room in the middle of a party. Albie says that Kim G. “deserved to get smacked, deserved to get thrown,” which makes me think he would have had an easier time at bouncer school, but Christopher is nervous about what all this hoopla means for his relationship with Kim’s son, Johnny G. We don’t get to see the phone conversation between the old friends, but judging from Christopher’s look of relief, I’m pretty sure it went down like this:

Johnny G: Don’t worry about it. My mom is batshit crazy.
Chrisopher: Cool. I’m glad this isn’t going to get in the way of our topless pet-grooming venture.

Melissa’s already over the Kim G. drama because she’s basking in the success of her toy drive. Sure, there are maaaaaybe only a hundred presents, the shelves so sparse that Fabulous Fred has attempted to make them look a bit livelier by staging them with candles, but I’m sure those children with cancer are going to love their Andy Cohen snow globes.

Once we’re past the Gorga party, the show devolves into a holiday parade of Real Housewives relatives, and I’m not even going to attempt to keep them straight. The only important one is Kathy’s sister Rosie, who prompts me to ask in all seriousness, “Say, who’s the strapping lad in the cap and jacket?” when she enters Kathy’s kitchen alongside Joseph. Lebanese Jon Lovitz hovers over the food wearing his favorite Polo sweater (in the Hamptons, a chill runs through Ralph Lauren’s heart), and Kathy is looking extra haggard as she listens to her mom tell stories about family grudges of yore. Apparently, Kathy’s parents and Teresa’s dad fought over money decades ago, but I can’t bring myself to care because they didn’t film it for a reality show.

And even though Caroline has her own radio show, I can’t bring myself to care about that either. She’s still doling out rare diamonds like “a true friend says the truth,” and when her brother Chris calls in for advice about how to turn around his relationship with his stepdaughter Ashley, Caroline neglects to utter those three magical words: “Return the Jeep.” Later, when the Manzo-Lauritas gather for a beautiful Christmas meal of “olive sauce,” Ashley announces that her New Year’s resolution is to make Chris like her — and by this, I’m pretty sure she means that she wants Chris to rent her a Manhattan apartment. But inside the next second, Ashley is making her shitty faces, rolling her eyes, and dismissively laughing into her manicure as Chris tells her that she only needs to be more responsible and a better listener if she wants his approval. Thus concludes the Miss Congeniality portion of the evening.

The person who’s actually turning out to be likable is Melissa Gorga, who understands that sometimes you just have to be the bigger housewife and bring over the good kind of cookies. Joe Gorga’s still mad at Joe Giudice’s mom for rough and tumble behavior at the Christening — this is the beanie calling the leather jacket black — but Melissa insists that it’s time to get over it and move forward. And while Meliss may have just randomly told little Antonia that Jesus is turning 89 this year, she’s actually making a bunch of sense.

So it is that the Gorgas end up going over to the Giudices’ home for Christmas dinner, and you might say that Melissa hopes this relationship can be “redone,” if only for the sake of the kids. With any luck, little Melania will live long enough to enjoy the company of her cousins, since she seems to be on a dangerous tear this season, messing with cheese knives, playing with candles, and calling out her Nona for pretending to be Santa. Maybe someday Audrina will find her way out of the 50 yards of tulle that Teresa put her in, and she’ll be able to move her arms freely enough to play with Gino. And it’s my sincerest wish that the boy who gave Gia her Kate Middleton knockoff ring doesn’t get diarrhea before some crucial family event 30 years in the future, starting this mess all over again.

Everything seems fairly peaceful between the Gorga and Giudice families for a New Jersey minute. Teresa and Melissa are both in extreme minidresses, yet there’s room enough for each to make her own statement; Melissa with boobs and Teresa with vagina. Joe Gorga’s right back in his lane, telling his brother’s Joe Giudice’s sister, “You’re looking sexy, no?” But something is amiss with Joe Giudice, who sits glowering in the kitchen, simmering in his own angry juices. I don’t know if it’s the seven courses of fish that make him finally lose it, but all of a sudden he’s spitting that the Gorgas are “fucking animals” and calling Melissa a “raccoon face,” which is pretty ironic coming from a guy who’s doing an uncanny impression of a gorilla. The episode ends before he flings his feces at the camera, but that doesn’t mean it didn’t happen.

now streaming 3 mins ago
The 30 Best Movies for Kids on Netflix The Princess and the Frog, Enola Holmes, The Willoughbys, and more.
overnights 9 mins ago
90 Day Fiancé Recap: Natalie Goes Full Villain We’ve reached the point where it’s no longer possible to give Natalie the benefit of the doubt.
the cayman islands 12:31 p.m.
Armie Hammer Says He’s ‘Genuinely Sorry’ For Calling Woman ‘Miss Cayman’ in Vid The Miss Cayman Universe Committee released a statement saying that the Committee was “very disturbed by the video.”
overnights 10:03 a.m.
The Real Housewives of Atlanta Recap: Daddy Issues Cynthia wrestles with whether or not to invite her father to her pandemic wedding, while Kandi gets the girls together for a good cause.
vulture lists 10:00 a.m.
The 50 Greatest Western Movies Ever Made A hard look at one of cinema’s oldest genres.
vulture picks 7:30 a.m.
27 Notable New Releases Over the Next Two Weeks Frances McDormand’s Zoom talk show, a new Euphoria episode, the Anything for Selena podcast, and more.
birthdays 2:08 a.m.
Betty White Celebrates Her 99th With Carol Burnett Feeding a Baby Elephant Just because she’s almost 100 years old doesn’t mean the hustle stops for even a second.
quarantine baby Yesterday at 11:35 p.m.
Jessica Biel and Justin Timberlake Confirm Arrival of Quarantine Baby, Phineas Apparently Ellen was one of the first people to learn of his existence.
overnights Yesterday at 11:00 p.m.
Your Honor Recap: The Telltale Brain As the action shifts to Michael’s courtroom, his guilt tags along.
we did it joe Yesterday at 10:29 p.m.
After 22 Years, the New Radicals Reunite to Play Virtual Biden Inaugural Parade This world is gonna pull through.
overnights Yesterday at 10:00 p.m.
All Creatures Great and Small Recap: The Prodigal Brother Returns Tristan the Slightly Rakish has come to Darrowby.
actually Yesterday at 9:03 p.m.
Don’t Like Master and Commander? Sounds Like a You Problem, Says Russell Crowe “That’s the problem with kids these days. No focus.”
trailer mix Yesterday at 8:00 p.m.
Three Dwayne Johnsons of Varying Sizes Star in First Young Rock Trailer The NBC sitcom will deliver a flying People’s Elbow through your TV screen February 16.
covid-19 Yesterday at 7:15 p.m.
Steve Martin Happy to Get COVID Vaccine, Less Excited to be Old Enough to Get It “Right now, I’m having no fide resects.”
we did it joe Yesterday at 4:26 p.m.
Groove to the Official Joe Biden and Kamala Harris Inauguration Playlist Steely Dan, baby!
now streaming Yesterday at 3:00 p.m.
The 40 Best Horror Movies on Hulu Right Now The Lodge, The Host, Anna and the Apocalypse, and more.
inauguration day Yesterday at 1:06 p.m.
Here’s How to Watch the 2021 Presidential Inauguration of Joe Biden What time is it? Can I watch it if I don’t have TV? What’s the deal with the Celebrating America primetime special? We have the answers.
rip Yesterday at 11:49 a.m.
Music Producer Phil Spector Is Dead at 81 The “Wall of Sound” pioneer was serving a 19-year sentence for the 2003 murder of Lana Clarkson.
catastrophes Yesterday at 1:33 a.m.
Jamie Lynn Spears Implicates Elon Musk in the Death of Her Cats “The Tesla is a secret cat-killer.”
coronavirus Yesterday at 12:00 a.m.
All the Celebrities Who Have Tested Positive for the Coronavirus The list keeps growing.
More Stories