This week, one of the Housewives again made us confront the awkward hypocrisies of this show. In asking the ladies to participate in her music video, LuAnn posed a problem. Few of them wanted to do it, but how could they pretend that being filmed for a silly pop song was any different — or worse — than being filmed for a silly reality show? Jill and Kelly quickly caved, as they are under the mind hold of LuAnn’s magical shaman jewelry. Cindy somehow got off the hook with the excuse that she had to hang out with her kids, which has literally never stopped her from doing anything before. Apparently, her brown hair was enough to protect her from LuAnn’s wrath. Which left the blondes, cavorting together in Alex and Simon’s bordello apartment in Brooklyn.

So who won this episode? Overall, the viewer, I think, because now that the season is ending the ladies are finally giving up on pretending to like each other. But if I had to choose between them … 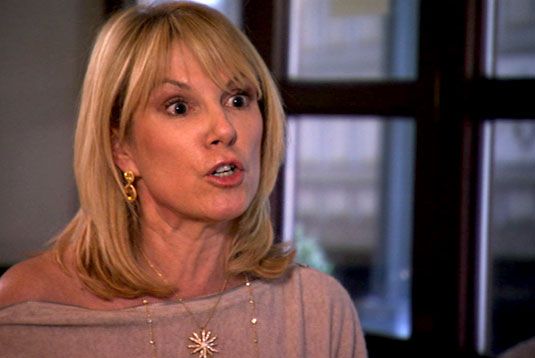 Well, it wouldn’t be Ramona. She started the episode at the gym with Sonja, in a full blowout and makeup, walking on the treadmill. Which was phony enough, but then she launched into an attack on LuAnn and her song. What on earth could be worse about appearing in a silly video than appearing on this dreadful, wretched show? If Avery’s been watching this season, she’s already learned a thousand negative lessons from her “role model.” (Example: How to be a jerk for no reason. The swipe about LuAnn being a weekend mom — when she’s said in previous episodes she’s out in the Hamptons almost all the time — was just unfair.) This mean-spiritedness continues at tea with LuAnn, when the Countess opened up with an out for Ramona, assuring her she didn’t want to make Ramona do anything she didn’t want to do. But Ramona plowed into her preprepared insults about LuAnn’s mothering anyway. It was completely unnecessary and totally jerky. Plus, we literally just watched an episode where Avery complained that she never knows where Ramona is. It would be nice to hope that Ramona would watch this and realize the hypocrisy of it all, but let’s face it, she’ll just get distracted by her own shiny jewelry. 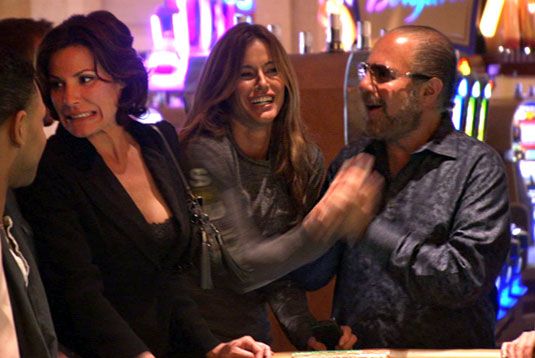 I think maybe in every single episode, Kelly should arrive late, be fun and pretty, and say some cute things. Doesn’t everyone want a friend like that? And more important, doesn’t everyone want their most crazy friend to limit themselves to just that? 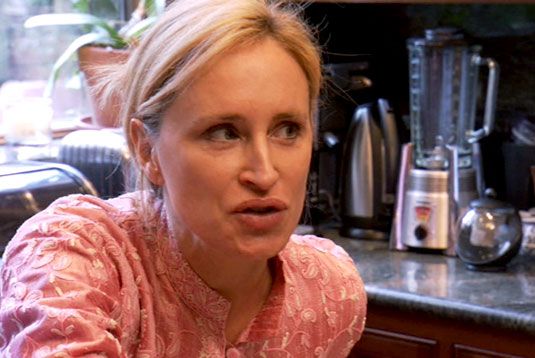 “I remember when I first saw the video with my daughter in St. Tropez,” Sonja says to Jill, making one of her rare mentions of the girl while at the same time reinforcing her own actual chic lifestyle. Well-played, Sonja. Her refusal to do the video is a little more subtle and polite than the other women’s, even if Jill doesn’t let her off the hook. And then fast-forward to her bizarre “breakfast” with Cindy. She was a little more aggressive, but also in the right once again. It seemed like that scene ended with them both as friends, even though the producers spliced together a few of her lines to make it sound like she would never have Cindy over again. Thankfully, later, we go back to old Sonja, walking into parties with her boob out and trying to make everybody play nice. 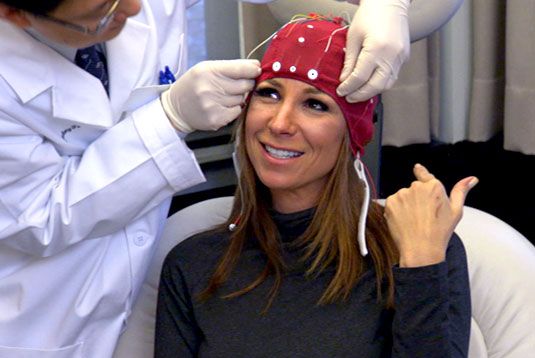 Jill rightly pierces Ramona’s ridiculous objections to the music video, right from the beginning. Without mentioning the show itself, she lists a whole series of things (“Turtle Time!”) that Ramona has done on the show that are worse than a silly video. But at the same time, Sonja is trying to politely back out of the video and Jill’s far too pushy about it. It’s perfectly legitimate to say, “You know what? I’m too old for this.” What does Jill care? Later, Jill was cute — if bossy — about the video. “I can’t sing, I’m 47 years old, who the heck would want me??” [Ed: 47, Jill?] And as much as she was distasteful about it, she was right that LuAnn did look a bit poodle-ish. Like, a Michael Jackson–from-Thriller poodle. 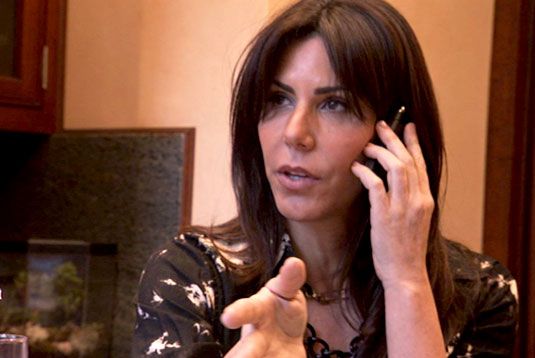 Okay, sure. Cindy was rude to conduct a conference call during brunch. (Let’s face it, it was 11:30 a.m.; she’s right, it wasn’t breakfast.) She should have gone into another room for ten minutes or not accepted Sonja’s invitation. But the awkwardness did draw a firm line between her businesslike personality and the homebound, decadent Sonja, eating breakfast at almost noon in her robe. It was probably on purpose. 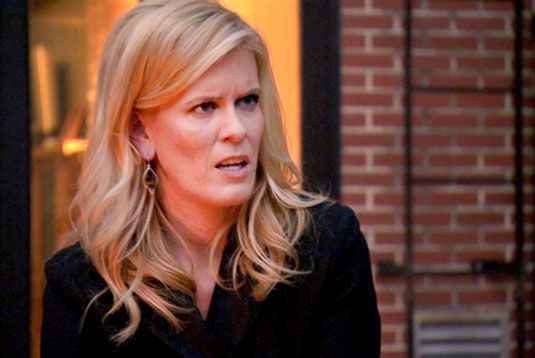 Alex starts the episode by drawing some confusing lines. She’d be in a gangsta rap before she’d be in LuAnn’s fluffy video? She’d rather say “cunt” than “class”? “I have a problem with her teaching the little people how to behave when she doesn’t know how to behave herself,” she explains, which makes sense in the context of LuAnn, but class is something that Simon and Alex think, and talk about, all the time. Or at least used to. “I have enough to explain to my mom, with the company I’ve been keeping.” She’s come a long way since the first season when she wanted to meet all these women for their “connections.” Where were her family oil fields then? 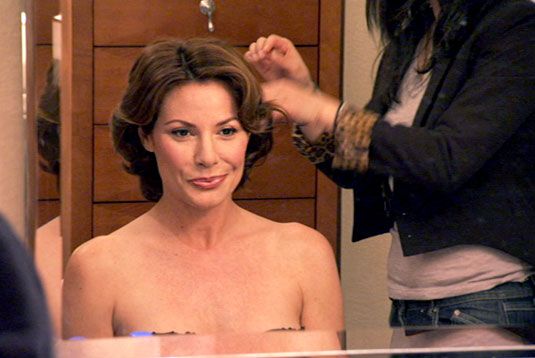 Which leaves LuAnn to win, of all people. I guess it’s fitting, since this is sort of her star turn. During the planning sessions for her video, it’s revealed that, in fact, she doesn’t actually think the whole thing is funny. “It’s all about beauty, class, and elegance lies within the soul,” she says, with dead seriousness. “Can’t we get a jet?” She goes on to say that she wants “simple elegance” for herself,” you know, “Sofia Loren, super chic.” How, then, did she end up with “Teri Hatcher from Tomorrow Never Dies”? Whatever, the video turned out to be fun in its own terrible way, and it was nice that she got all the assistants and stepchildren involved. (Even though, watching them pretend to laugh and cavort was the most uncomfortable thing to happen on Bravo since Jerry Seinfeld went on Watch What Happens Live). We’ll give her the win for once.

Ancillary Winners:
Michael, LuAnn’s Assistant: Hello, sweater vest, where did you come from?
The Borgata in Atlantic City: How much did the casino pay for a bunch of gay dudes and a drag queen to sit around a room and talk about how great it is?
Noel: For telling his mother it was inappropriate, at her age, to have an Auto-Tuned dance video where she’s rolling around with a bunch of shirtless male models making that Penthouse “oops, I just burped!” face.
The Old Guy With the Red Pants at the Gym Who Leers at Sonja: Aw. Way to make a gal’s day!
Dean, Simon’s Australian Friend: Much better to be “Australia” than “Jersey.”
Francois: Already drinking beer! Hooray! Also, a brilliant moment came when Alex is talking about hating people who act like “wannabes,” and Francois just yelps, “really??”
Path Medical Center and Sodung Fu: It looked like he was shooting goo directly into Jill’s head. Even though he wasn’t, it was still fun to watch.
Michael: It’s nice how his houseboy uniform now includes a knit hat.
Jonathan: Where does Jill keep coming out with stepchildren? They seem so normal and well-adjusted. Maybe because they’ve been kept off the show until now?
Cindy’s Assistant: Apparently the assistants these days don’t have to eat. Amazing.
Avery: For being a really good sport about hanging out with her mom and her friends.

Ancillary Losers:
James “Jersey” Murray: Beyond just working with LuAnn on that video — what’s with that outfit? You are too old to wear gold medallions, and your hairline is too receded for frosted tips!
Director Chris Lynch: Aw, poor guy couldn’t even spit out one thing he liked about LuAnn’s song!
Simon: Making a point about letting your children drink at 17 because foreign people do it, and because not to do so is some kind of injustice, just feels so desperate. And haven’t you learned the husband lesson about not talking trash about the Countess? “Move the ‘O’ out of countess?” You didn’t think we all thought of that in season two?
Madison & Vine: Honestly, these restaurants should just start putting food in front of people even if they won’t eat it.
Whatever Princess LuAnn Name-Dropped: Wherever that “good friend” is now, I’m sure her head spun around in a circle under her tiara the minute she was name-dropped on the Real Housewives.
Mario: After touching Peter’s six-pack abs, he looked actually afraid. Also, the Brooklyn line was pretty assholic.

Real Housewives of New York City Recap: ‘Can We Get a Jet?’