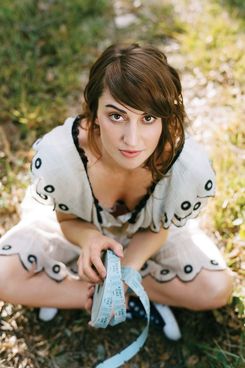 As Blake Shelton aptly demonstrates, being on a televised talent competition can be a major career boost. So it’s probably no surprise that when the producers of NBC’s underappreciated a cappella showcase The Sing-Off went looking for a new judge to replace defector Nicole Scherzinger (she’s now with The X Factor), they had plenty of interest from established performers, according to sources familiar with the situation. Now Vulture confirms they’ve found their new judge: jazzy chart-topping songstress Sara Bareilles.

Best known for her 2007 No. 1 hit “Love Song,” Bareilles brings some serious a cappella cred to her gig: She spent a big chunk of her college days at UCLA performing as part of the university’s Awaken A Cappella group, and she’s been known to bust out tunes sans instruments at concerts. That experience is key, according to NBC reality chief Paul Telegdy. “I love the fact that on this show, the judges are each so rooted in the world they preside over,” the Peacock exec says. “They can do what the contestants are doing.” Indeed, Bareilles beefs up an already eclectic — and experienced — mix on the Sing-Off judging panel, joining Ben Folds and Boyz II Men alum Shawn Stockman. She’s also a bit familiar with the show, having appeared in last December’s season-two finale.

Bareilles is currently touring with Sugarland in support of her most recent Sony Music album, Kaleidoscope Heart, which debuted at No. 1 on the Billboard chart but has yet to yield a killer single quite as popular as Love Song. With the Sony Pictures TV-produced Sing-Off returning for its third cycle September 19, don’t be surprised if there’s a new Bareilles single floating around pop radio right around Halloween.

Sara Bareilles to Join The Sing-Off

vulture lists 15 mins ago
Kings, Ranked There are a lot of kings out there these days, and some of them are even good.
prophecies 18 mins ago
Community Got Six Seasons, and Now It’s Getting a Movie The dream is coming to fruition with (most of) the original cast and Dan Harmon.
my soundtrack song is dropping 25 mins ago
LCD Soundsystem Return With New Noise for White Noise In addition to “New Body Rhumba,” they also announced a new Brooklyn residency.
close read 10:00 a.m.
The Hollow Impersonation in Blonde In life, Marilyn Monroe was a complex artist and human being. In the hands of Ana de Armas, she’s an eternal victim.
By Angelica Jade Bastién
this week in late night 9:50 a.m.
Nick Kroll Negging Seth Meyers Won Late Night This Week Plus Kate Berlant and Billy Eichner on WWHL and podcast energy on The Late Late Show.
movie review 9:46 a.m.
Bros Is at Its Best When It Forgets About Making History Billy Eichner’s romantic comedy is messy, funny, and ultimately charming — when it isn’t weighed down by all the firsts.
By Alison Willmore
influences 9:00 a.m.
How Basic Instinct, Fight Club, and Hitchcock Shaped Do Revenge Director Jennifer Kaytin Robinson on the unexpected cinematic inspirations behind her candy-coated black comedy Do Revenge.
By Ilana Kaplan
the grub street diet 6:00 a.m.
Stephanie J. Block Celebrates Taco Tuesday on Monday “Our whole place kind of smells like a Mexican restaurant.”
By Zach Schiffman
midnights era 2:46 a.m.
Wait, Is Taylor Swift Just Giving Us Straight Answers? There’s nothing better than “Midnight Rain.”
overnights 2:01 a.m.
The Lord of the Rings: The Rings of Power Recap: Here Comes the Flood The Rings of Power has its first big battle episode, and it’s worthy of Helm’s Deep.
overnights Yesterday at 10:38 p.m.
Atlanta Recap: Take Me to Church Everyone has an Aunt Jeanie in their life.
opera review Yesterday at 10:36 p.m.
The Met’s Medea Is the Sondra Radvanovsky Show The company finally got around to mounting the 1797 opera, one of two blood-soaked Greek myths to open this month.
departures Yesterday at 10:20 p.m.
Trevor Noah Is Leaving The Daily Show After Seven Years “Honestly, I’ve loved hosting the show. It’s been one of my greatest challenges. It’s been one of my greatest joys.”
overnights Yesterday at 9:02 p.m.
Ghosts Season-Premiere Recap: Life Lessons From the Spice Girls Welcome back to Woodstone Manor — er, Woodstone B&B!
overnights Yesterday at 8:00 p.m.
RuPaul’s Drag Race U.K. Recap: Performance Anxiety Amazing looks and questionable performances.
last night on late night Yesterday at 7:36 p.m.
How Far Will Miles Teller Go to Promote His Canned Cocktail? There’s no limit to what he’ll make Jimmy Fallon drink.
chat room Yesterday at 7:29 p.m.
The Good Fight’s Alan Cumming Was Delighted to Free Eli Gold From Network TV “There was actually more swearing initially.”
cancelations Yesterday at 7:00 p.m.
Netflix Batgirl’d Grendel, Series Not Moving Forward They had already begun filming.
awards chatter Yesterday at 6:57 p.m.
My Policeman? More Like My Supporting Actors All six principals will be running as supporting actors come awards season.
coming soon Yesterday at 6:13 p.m.
The Favourite Duo Yorgos Lanthimos and Emma Stone Reuniting for And And our favourite duo, too.
More Stories