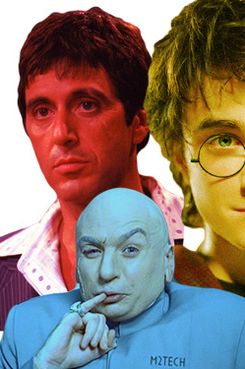 In real life, a diminutive British kid who knows his way around a broomstick, always carries a wand, and has a lightning bolt carved into his forehead wouldn’t be a cultural icon — he’d be one half of the winning team on Beauty and the Geek. But Harry Potter exists in a fictional world, where scars are character-building symbols of deeper traits, not in the real one, where facial lacerations are things one considers having fixed. (Boo, real world.) So following up on a question that countless 12-year-olds have asked before — what if Harry Potter were real? — we got Harry, and a host of other famously scarred movie characters, and a consultation with a plastic surgeon, Dr. Lance Wyatt, who’s an expert in making scars disappear. His insights should prove helpful to Harry, if Mr. Potter ever has cause to enter the wizard protection program.

How he got the scar: When Harry was 15 months old, the evil Lord Voldemort struck him with a killing curse, which the little crumpet improbably survived thanks to his mum’s love. Though she was able to save his life, she couldn’t prevent him from looking like a serious AC/DC fan. How he could get rid of it: “It looks flat and not particularly wide, so I think he’d be a candidate for a chemical peel or laser treatment,” Dr. Wyatt says. “Those aim to remove an outer layer of skin so a new, fresh layer develops.”
How he got the scar: Despite what the investigators from the Miami Police Department think, Tony Montana got his trademark Scarface from beating the plantains out of some kid. How he could get rid of it: Dr. Wyatt says Tony’s “a candidate for dermabrasion,” a procedure that sands the scar down so it’s even with the rest of the skin and forces Mr. Montana to get a new nickname.
How he got the scar: Brad Pitt’s hillbilly Nazi killer in Inglourious Basterds is the owner of an intense scar that spans his entire tree-trunk-size neck. The origin of the scar is never explained in the movie, but it seems pretty well accepted around the Internet that it’s a serious case of rope burn resulting from an attempted lynching. How he could get rid of it: “His scar is wide and dark,” says Dr. Wyatt. “We could lighten it with some skin cream and laser treatment, and if there’s any contour irregularity that might be softened out with chemical peels.”
How he got it: It’s not hard to imagine how Edward Scissorhands got his scars. When your fingers are made out of razor-sharp scissors simple urges like popping pimples or picking your nose can lead to serious lacerations. How he could get rid of it: “I would remove the scars,” Dr. Wyatt says. Cutting out the scar and suturing the skin that surrounds it would be the best bet for Edward. “You’re basically trading scar for scar. But by doing it my way, in a controlled environment, I can get you a better scar,” he says.
How he got it: Back in 1968, when Freddy was just a garden variety child murderer, he was the victim of vigilante justice at the hands of a group of parents who set him on fire in the very boiler room where he liked to do his killing. When he reemerged in the dreams of teenagers in the eighties, his face was melted. His sweater, however, still looked great. How he could get rid of it: “I don’t know how you would treat someone like him,” Dr. Wyatt says. “You could just start replacing skin for skin with skin grafts. That would involve taking a full piece of skin from the upper thigh and starting to resurface his face little by little.”
How he got it: Before he became the horribly disfigured Two-Face, Harvey Dent was horribly handsome. But then the Joker blew up a building and half of Harvey’s face with it, turning him into a half-hunk, half-thing that makes you want to hurl. How he could get rid of it: “This isn’t so much a scar, but a loss of tissue,” Dr. Wyatt says, before suggesting that Dent go for a “semi-facial transplant.”
How he got it: The origins of Dr. Evil’s facial scar aren’t explained in any of the “Austin Powers” movies, but Wikipedia says the wound is a result of Mensur fencing, which definitely sounds like something Dr. Evil would do. How he could get rid of it: Dr. Wyatt suggests cutting out Dr. Evil’s scar and creating a new wound that he would then monitor so it heals correctly. He also suggests Dr. Evil wear less makeup.
How he got it: The Joker’s scar in The Dark Knight is as mysterious as it is cringe-worthy. In the movie, he tells two different stories about how he got it. In the first version, his drunk father slices his cheeks with a kitchen knife; in the second, he does it to himself with a razor blade to make his wife feel better about her own scars. How he could get rid of it: Dr. Wyatt suggests using tissue expansion. That would involve inserting a balloon under his skin by the ear and gradually filling it with liquid. The skin around the balloon would stretch, eventually allowing the doctor to cut away the scar and put the new skin in its place. “That’s even if I want to treat him,” Dr. Wyatt adds. “After all, he is the Joker.” Photo: TM & ? DC Comics. ? 2007 Warner Bros. Entertainment Inc.