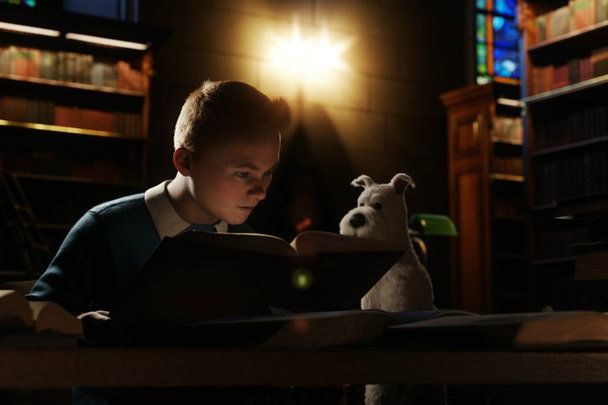 Most Steven Spielberg movies are an easy sell to the general public, but The Adventures of Tintin: The Secret of the Unicorn is a different case. The Tintin comics, while beloved abroad, are virtually unknown in the United States, and the recent trailer for the movie had its doubters. Today at Comic-Con, Spielberg and producer Peter Jackson replayed the trailer and showed off some new clips, and while the movie came off better in a lot of respects, there’s still one potential trouble spot: the main character.

First, the good news: It’s often said how much motion capture allows actors to play wholly different-looking people, and Andy Serkis proves it yet again with his character Captain Haddock. Already a motion-capture pro with apes and dessicated Hobbits and this time asked to play a normal human, there’s still no recognizable trace of Serkis in this stout, big-nosed, bearded man, even though the mannerisms, physicality, and line readings came straight from the actor. It’s fascinating to just watch Haddock, and he’s been appealingly animated, his facial features exaggerated just enough to surmount the uncanny valley so many motion-capture productions fall into.

Unfortunately, Tintin himself didn’t escape the same fate. There’s something off about this character, and it’s clear why he’s been minimized in the trailers for his own movie. Aside from the swoop in the front of his hair that lends him some cartoonish verve, Tintin looks simultaneously too-human and not human at all, his face weirdly fetal, his eyes glassy and vacant instead of bursting with animated life. The voice performance by Jamie Bell is fine, but the look is lacking.

“If we don’t do something new every time, we get bored with ourselves,” Spielberg explained during the panel, and it’s clear that he loved shooting the movie, especially since he got to operate the camera himself. Still, he’ll have more work ahead of him to convince audiences that motion capture was the right format for translating Hergé’s classic comic book hero. The ironic thing is that as a joke, Spielberg showed off a live action test reel he’d made that cast Jackson as Haddock and featured Snowy the Dog as the only animated element … and it actually looked pretty good. While the extended action sequences that Spielberg played for us had his usual kinetic zip, that mock Tintin test reel proved that some things are just more fun in the flesh.

The Biggest Problem With the Tintin Movie Might Be Tintin Himself

grammys 2023 15 mins ago
All the Best 2023 Grammys Red Carpet Looks  Lizzo, Doja Cat, and more make the whole place [*Taylor Swift voice*] shimmer!
overnights 7:27 p.m.
1923 Recap: The Tedium of ‘the Tedium of Healing’ After a mid-season hiatus, it’s a bit lackluster to return to see the Duttons’ reinforcements heading to Yellowstone at a snail’s pace.
gamer girls 6:28 p.m.
Keke Palmer Is Streaming the Sims on Twitch Now Content warning, she has installed Wicked Whims.
last night on late night 6:23 p.m.
SNL Exploits Pedro Pascal’s Daddy Era We all knew it was coming.
award hoarders 5:15 p.m.
EGOT Watch: Who Will Be Next to Complete the Awards-Show Grand Slam? All Trent Reznor needs is a Tony.
grammys 2023 5:01 p.m.
Viola Davis Read Her Way to an EGOT After winning a Grammy for Best Audio Book, Narration, and Storytelling Recording.
grammys 4:00 p.m.
Which Old Video-Game Score Would Have Won a Grammy? Predicting past winners for the Recording Academy’s new music-in-gaming category.
grammys 2023 3:50 p.m.
Here Are the 2023 Grammy Award Winners Beyoncé and Brandi Carlile have both already scored wins.
bowen fan club 3:35 p.m.
Bowen Yang Is a Deflated, Distraught Chinese Spy Balloon in SNL’s Cold Open “I entertain you people for four days, and then get shot by Biden? Can’t believe I’m Joe’s Osama.”
high-five 2:16 p.m.
Woody Harrelson Is Joining SNL’s Five-Timers Club This Month And Jack White will become a five-time musical guest.
overnights 1:47 p.m.
Saturday Night Live Recap: Pedro Pascal Left No Crumbs The first great Saturday Night Live episode of 2023 has arrived.
it's-a-me 11:47 a.m.
Pedro Pascal Stars in SNL’s Big-Budget Mario Kart Trailer Chris Pratt, we have your competition on the phone.
your honor Yesterday at 8:04 p.m.
Reese Witherspoon Hints at Elle Woods and Paulette Reunion for Legally Blonde 3 “There is no Legally Blonde 3 without Jennifer Coolidge.”
same Yesterday at 5:56 p.m.
Adele Is Going to the Super Bowl ‘Just for Rihanna’ Does she need a 1+?
grammys 2023 Yesterday at 2:40 p.m.
The Grammys 2023 Special Merit Awards Returns Tonight Nirvana, Ma Rainey, and Bobby McFerrin are some of the night’s honorees.
vulture lists Yesterday at 1:00 p.m.
Every Tom Hanks Movie Performance, Ranked Where do Elvis and A Man Called Otto fall in the Tom Hanks canon?
back in the press Yesterday at 9:44 a.m.
13 Takeaways From Armie Hammer’s First Interview Since His Scandal He admitted to being emotionally abusive to his accusers, but claimed that all his sexual encounters were consensual.
gladia2r Feb. 3, 2023
Normal Person Paul Mescal to Entertain Us in Gladiator 2 The Ridley Scott-directed sequel will release on November 22, 2024.
web of lies? Feb. 3, 2023
Of All the Broadway Musicals for George Santos to Claim… He reportedly lied about producing the notorious flop Spider-Man: Turn Off the Dark.
overnights Feb. 3, 2023
RuPaul’s Drag Race Recap: Golden Girl Groups The filler is gone, the competition is heating up, and the queens are fighting.
More Stories