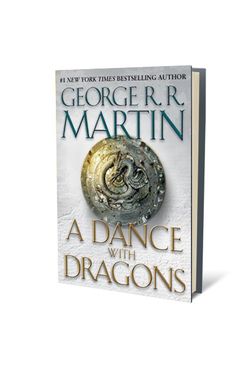 Valar morghulis! At midnight last night, A Dance with Dragons, the long-awaited fifth book in George R. R. Martin’s “A Song of Ice and Fire” saga, finally arrived in book stores. To celebrate this fact, for the next few weeks Vulture’s resident expert and superfan will be recapping the new novel, approximately 100 pages at a time, every other day until it’s done. As with TV recaps, these book recaps will provide chapter summaries and commentary: Meaning, they will contain spoilers. If you haven’t gotten to the part of the book being recapped — what, you couldn’t stay up all night reading? — come back to the recap when you’re caught up. If you have stayed up all night and are way ahead of us, be patient, we’ll get there. As always, please share your corrections, thoughts, theories, reactions, and love of Daenerys in the comments — though, for anyone who has read further along, please don’t spoil what’s to come. This first recap will cover the first seven chapters including the prologue — pages 1 to 97.

“The night was rank with the smell of man.”

Not a bad first sentence, George! We’re once again North of the Wall for our prologue (GoT: “We should get back,” Gared urged as the woods began to grown dark around them”; ASoS: “The day was grey and bitter cold, and the dogs would not take the scent.”). And, through our new POV character Varomyr, we get some new info on the nuanced mechanics of skinchanging and wargs.

Eating people while inhabiting a wolf: totally cool. Eating people while human: not cool. Inhabiting another human’s body is an abomination. Inhabiting cats is problematic, because cats are assholes. Dying while in an animal’s body hurts, but doesn’t kill you. Dying in your own body sends you to a “second life” (not this one). And in a sexual kink that furries can only dream of, Varamyr often inhabited the female wolf Sly as she was being mounted by the alpha male One Eye.

As in GoT and ASoS, the prologue ends with the arrival of the Others, who kill the woman Varomyr had briefly taken over. Varomyr, who sounds like a real dick, gets to become one with everything, which hardly seems fair. But hate the Game, don’t hate the skinchanger.

Tyrion! It’s been what, eleven years?. He is drunk, heading toward points unknown, and emotionally all messed up about having killed his father and mistress. Our favorite noseless dwarf (can’t wait to see the CGI on Peter Dinklage in a couple of years) is also obsessing about what Tywin Lannister said before receiving a crossbow bolt in the belly.

“Wherever whores go,” his father had said. His last words, and what words they were.

Tyrion is understandably distressed about his patri/mistress-cide, and seems to be taking Tywin’s throwaway “wherever” comment literally, asking just about everyone he meets if they know the answer to the riddle.

Except! Those weren’t Tywin’s last words at all. They were:

Now, it’s certainly interesting to the Freudian analysts among us that Tyrion has selectively chosen to remember his father’s comments on Shea a moment before the Oedipal money shot. But maybe even more interesting, given GRRM’s penchant for misleading paternity situations: What if Twyin was telling the truth?

PS: Tyrion’s face-off with Illyrio (Hi, Illyrio!) over the mushrooms of death owes a debt to Princess Bride’s battle of wits.

Khaleesi is facing a Taliban-style insurgency in Meereen, and like the Americans in Vietnam, and just about every country that has ever tried to occupy Afghanistan, she is learning that good soldiers don’t make good policemen. Dany is facing a murderous group of Ku Klux Klan–like former slavers called the Sons of the Harpy, who are terrorizing and murdering former slaves.

We get what must be the umpteenth “citizens petition the monarch” scene in these books, and okay, we get it, it’s no fun meting out judgment, favors, punishments, and whatnot. People are greedy and ungrateful; your ass cheeks get sore. Apparently no one in Westeros or Slavers Bay has ever gotten around to inventing a small claims court, let alone the full-fledged Truth and Reconciliation Committee that Meereen clearly needs.

Whenever Daenerys has tried to do the right thing (see: Mirri Maz Duur), it has usually ended badly. Could her good intentions be just as destructive as Cersei’s venality?

Still, I think we can all agree, there is nothing worse than realizing that one of your dragons has flambéed a little kid.

Jon, like all of the surviving Stark kids, is having serious warg dreams through his direwolf. Does that mean that the Starks have some natural skinchanging talent in their DNA? Or was it that fateful discovery of the orphaned direwolves and the coming of Winter that triggered the ability?

The Night’s Watch is in an uneasy alliance with King Stannis, who is really into protocol and following the rules and is basically the diametric opposite of his older brother. Paired with the spooky religious zealot / sorcerress Melisandre, the trio has the makings of a classic situation comedy: Stan, Mel, and Jon may not get along, but if they don’t figure out how to be roommates, the realms of Man are totally screwed!

Seriously, though, Stannis is just the worst.

More skinchanging! From where we started five books ago, there is definitely a noticeable increase in the amount of magic in the world. Bran is now slipping into Hodor (Hodor!), which makes Hodor whimper, which, okay, that is just about the dirtiest sentence I’ve ever written.

Bran, Summer, Hodor, Meera, and Jojen are being led by Coldhands the Friendly Wight to meet the three-eyed crow. Except Coldhands is not so friendly when he’s using an army of crows to kill some men of the Night’s Watch. Bran, in Summer’s body, has no problem feasting on some manflesh.

So, Coldhands is almost pretty much certainly Benjen Stark, right? But that raises two questions: Why make such a fuss about it over the span of several books without just coming out and confirming it? And, more interestingly, why did Benjen get to be a friendly wight instead of the usual murderous kind? I think we need some more rules on wight-making, please.

It’s not surprising that Illyrio has spirited Tyion out of Westeros, since we know he’s been working with Varys. But now we finally get some expository background on the Eunuch and the Fat Man: They were a good cop–bad cop con man duo. They went legit when Illyrio married the Prince of Pentos’s daughter, and Varys got talent-scouted by King Aerys. Their motives for restoring a Targaryen to the Iron Throne are … ambiguous to say the least.

Illyrio: “I keep her hands in my bedchamber. Her hands that were so soft.” Aw. Ew.

Tyrion, while stuffing himself on a cross-country coach ride with Illyrio to meet up with Griff the sellsword, has what seems to be a prophetic dream: He is fighting alongside Barristan and Bittersteel, the founder of the Golden Company of sellswords, as dragons fly overhead. He has two heads, both noseless. You just know that’s going to be important later on.

It’s a new POV that will have you scrambling for the Appendix. Please turn to House Martell: It’s Prince Quentyn, who has been dispatched by his father, Doran Martell, to find Daenerys and marry her, thereby upholding a double secret marriage contract between Dorne and the Targarneys. Quentyn and his companions are stranded in Volantis with no way to get to Meereen.

Am I alone in groaning a little bit with the introduction of this new POV character? The Dorne chapters in AFFC weren’t exactly page-turners, and Quentyn “I didn’t ask for this” Martell seems like an early nominee for one of those chapters that I will be trudging through dutifully to get back to Jon, and Dany, and Tyrion.

It looks like the trio from Dorne will be signing up as sellswords. And that’s all I have to say about that.

The Vulture Book Recap: Let’s Read A Dance With Dragons Together