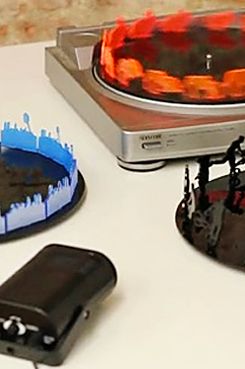 We’re getting animated this week. The gadgets, apps, and hacks in the queue: mash-ups with a Monty Python aesthetic, GIFs you can put on your coffee table, an iPad-app-slash-coffee-table book, an AutoTuning of your news, and a way to reclaim the iPhone’s most infuriating delay.

As always, VultureBytes@gmail.com is waiting to welcome you and your tips with open arms.

If MusicChoice ruined the fun of playing music through your TV (and it did), Radio Soulwax revives it. Instead of those low-res logos bouncing around the screen, Soulwax offers 24 hour-long mixes perfectly synced with weird, trippy visuals. But not trippy the way those old Windows Media Player visualizations were trippy. Trippy the way Monty Python animation sequences are trippy. Example: One of Soulwax’s mixes is called Introversy, and it’s a mash-up of 420 songs’ introductions. While the music’s playing, the song’s album covers are being animated in the background, so, for example, the neon snakes on Steely Dan’s “Can’t Buy a Thrill” grow as the synth first rolls in. Basically, Imagine Girl Talk illustrated with quirky GIFs. It’s great. And if you have the right equipment to port the video to your TV, it makes the perfect background visual for your next party. MusicChoice can’t even begin to compete. PRICE: Free, which makes it worth trying even if you aren’t going to port it to your TV.
Speaking of quirky GIFs, they are about to make the transition into the real world, as physical objects. Greg Borenstein and Scott Wayne Indiana started a Kickstarter project that lets you turn GIFs into zoetropes, an antique animation technique that tricks the eye into seeing the various frames in an animation as one fluid motion. In their physical form, the GIFs get disassembled, each frame lining up next to one another in a circle the size of an LP. Then it spins, and with the help of a strobe light, you can see the full animation. Borenstein and Indiana are selling their own designs, but the real treat here is the chance to have your own GIF made tangible. For $350. Yes, it’s a lot. But you’re telling us you’re not willing to spend $350 for your own Jon Hamm GIF? PRICE: $50 for a basic design; $100 for three; $250 for a GIF-artist’s special-edition GIF; $350 for your own.
Vulture Bytes is looking forward to a dystopic future when tablets have become so cheap to make that everyone just buys single-app iPads. On the software side, we’re basically already there. Proof: POWER Platon, a coffee-table book disguised as an app. It makes those photos of world leaders from The New Yorker you always think are neat (but not that neat) slightly more interactive and as high-def as the iPad will allow. And it’s a neat effect. They do look better than they did on The New Yorker’s flimsy pages, and about as good as they would in a coffee-table book. Which, what’s the difference again? PRICE: $10.
You know a meme has gone too far when there start to be “official” apps for the pseudo-celebrities of the genre. And yet, Songify, AutoTune the News’s chosen app, sort of confirms what made AutoTune so fun in the first place. Talk into the phone, wait as it turns your voice into an AutoTune sample, and then actually be somewhat impressed as it loops it over a serviceable beat. It’s good for a party trick, and the realization that if an app can do this on the fly, what those AutoTune the News guys do can’t actually be that hard. Let hundreds of imitation AutoTune bands bloom. And then be killed off swiftly. PRICE: Free
Things the iPhone does conveniently: take videos. Things the iPhone does not do well: take videos. Tell us, Vulture Bytesters: How long does it take for you to actually start recording a video once you’ve decided to do it? That first impulse is instantaneous, sure, but then there’s the shuffling through all your apps to find the camera, the surprisingly long load time, the struggle to tuck your finger underneath your hand as you tap the record button, and the inevitable first two seconds of shakycam as you actually steady the camera toward your subject. This is not efficient. Spend a dollar and make it less onerous, would you? The dollar gets you Capture, an app that immediately starts recording video after you start it. That’s at least two steps eliminated. Think of all you can do with that time. PRICE: $1

Vulture Bytes: iPad Coffee-Table Books, AutoTune Your Own News, and GIFs Made Real