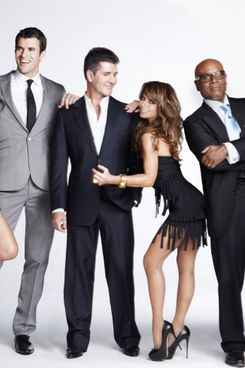 Fox trotted out the judges and producers for The X Factor Friday to offer up a little insight into just how the network’s newest musical-competition series will be different from all the other musical-competition series. While Fox unscripted chief Mike Darnell said something about “smoke” and “lights,” and Simon Cowell talked up the importance of having no upper age limit on contestants, the group really never did answer the question. But that doesn’t mean the 45-minute event wasn’t without merit. Cowell was piped in via satellite, which created a nifty visual of Cowell towering over Paula Abdul while making funny faces and generally mocking her. Also, Abdul, as always, had a tough time stringing words together in an effort to make a complete sentence (always fun to watch!) while she and fellow judge Nicole Scherzinger both wore suitably “fabulous” high heels (as the editor from Broadcasting & Cable sitting next to us mentioned). Here’s what else we learned from our time with the new Xcrew, plus some bonus J. Lo scuttlebutt.

• Simon is still hoping to get Mariah Carey to contribute to some new, secret part of the competition. Perhaps it’s selling X Factor merchandise?

• The grand prize for the show won’t just be a $5 million rewarding contract, as previously announced. The winner will get $5 million in cold hard cash.

• There’s also now a bonus prize: Pepsi will showcase the X winner by giving him or her a Super Bowl commercial of their own next February. They will not be required to burn part of their hair during the making of said ad, however.

• The first live episode of the season, scheduled to air in late October, will be expanded to a whopping two and a half hours. That means Fox will force its affiliates to delay their late local newscasts and force all of us to give up even more of our evenings to watch a reality show. “People love these longer shows,” Fox Entertainment chief Kevin Reilly told Vulture later. Sure they do.

• Scherzinger could very well give Paula a run for her money when it comes to crazy, WTF moments. During Friday’s session, the Pussycat made a number of loopy comments, like when she declared she was “never ruthless until I met this cast.” She also said that, after being asked to move from host to judge, “I cried for days.”

• Of course, Paula is still totally nuts. The biggest difference for her between her role on X vs. Idol? “I sit differently,” she said. Also: “This is a real reality show,” she said of X. “And you’re going to get a real reality review without manipulation. What you see is what you get: the good, the bad, and the ugly.”

• L.A. Reid barely said anything during the session, which means he could end up being very boring. Or maybe he’s saving his best stuff for the camera.

As for J. Lo: There’s still been no official word about whether or not Jennifer Lopez will be returning to American Idol next season, though it seems hard to believe the singer would walk away from a showcase that’s been such a clear boost to her career. When we caught up with Fox reality chief Mike Darnell and Idol exec producer Cecile Frot-Coutaz Friday at the network’s portion of the TV Critics Association press tour, they declined to give a definite answer about J. Lo’s deal. But when we asked Frot-Coutaz whether she or Darnell were worried about losing Lopez, Frot-Coutaz, the answer said a lot: “Do we look worried?” she said. Later, Reilly told us that talks were indeed going on with Lopez. “It’s a complex negotiation,” he said.