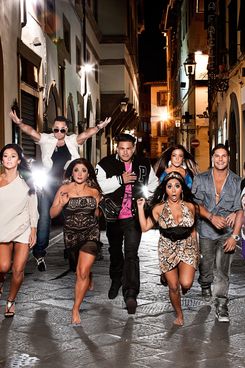 We don’t know how we missed this, but at the tail end of last week, Jersey Shore’s JWOWW and Sammi went on Access Hollywood to discuss their (deep breath) upcoming cameos in The Three Stooges, the long-gestating Farrelly brothers remake that co-stars Will Sasso, Chris Diamantopolous, and Sean Hayes, and — apologies to Larry David, Jane Lynch, Sofia Vergara, and Jennifer Hudson, who are also in the film — does not seem — how do we say this politely?— very promising. “For the Farrelly Brothers to say how well we did, it gives me chills,” JWOWW says. The rest of the cast joined them in the film, but the most alarming after-effects may not just be them, you know, appearing in this movie, it may be that this movie inspires Sammi to pursue an acting career. “I actually enjoyed acting, and I enjoyed being a part of it,” she says, “so I would love to see what the future holds, whether it’s acting or something else.” She should hit up Lifetime: Perhaps next time they have a movie of the week about a victim of spousal abuse, they can have Sammi sit in as a support group extra. [Movieline via AV Club]