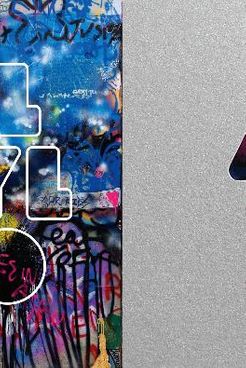 This just in: Mylo Xyloto, the much-anticipated fifth Coldplay album, will be released October 25, with the lovely image you see to your right operating as the album cover. And that’s not all! Billboard recently had a nice chat with Chris Martin, and some interesting truths were uncovered. Best of all, the album’s not quite done yet, but it’s sort of going to be a rock opera? Take it away, Chris.

[There is] also a story, supposed to be loosely a kind of romance in an oppressive environment. It’s sort of a love story. It will have a happy ending, so you either didn’t hear that song today or you didn’t hear it in the right sequence.

Whaaaaaat?! Will the “oppressive environment” be the harsh reality of megafame? Does it end with a Gwyneth Paltrow dinner party? Is every teardrop a waterfall?

Also of note: Guitarist Jonny Buckland gets more solos because everyone’s already familiar with Martin’s voice; one track, “Major Minus,” was inspired by The Road (book, not movie — sorry, Viggo Mortensen); and Martin thinks that Justin Timberlake’s absence from the game “gives everyone else a chance, but it’s a great loss to music.” And the interview ends like this:

I know you’ve got a show to do, so I appreciate you taking the time to do this.
No, I appreciate it, too, man. It’s the same for writers, everyone in music has to stick together a bit these days, don’t you think?