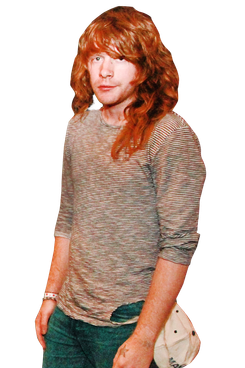 Dom burst onto the scene early last year with Sun Bronzed Greek Gods, an EP of infectious songs about couches, cats that like to party, and the many awesome virtues of living in America. The band’s second EP, Family of Love, was released earlier this week by Astralwerks, and it’s another collection of charming, fuzzed-out bubblegum pop. Vulture recently got on the phone with the band’s eponymous lead singer to talk party hotlines and angry landlords who spend their free time browsing music blogs. Oh, and our chat was interrupted for fifteen minutes so that Dom could hang out next to a waterfall.

Dom only formed at the beginning of last year. Has success changed things dramatically?
I think I downplay it a lot, but things have changed pretty drastically. I was living in a boarding house before, barely getting by. Every day was a struggle. Didn’t have too much respect for anything I was doing, but then I started this band and did the real band thing, and people started paying attention to me and it was a great feeling. Now I have people I know who are going to be in my life and are definitely part of my family. Fortunately we can get by based on the band. Sometimes there’s a little bit too much focus on music. I kind of get sick of it. I don’t know if I’ll take a break or what I’ll get into next. It all depends on how people receive the EP. If people like it, then we’ll tour on it, pump out some more jams; if it’s less than ecstatic, I might just take a break and get into filmmaking or something.

You got Gucci Mane to rap on your track “Living in America.” How?!
I was really stoned, making a fool of myself, and I got a call. I put my ear to the phone and I’m like, “Who the hell is this?” “This is Gucci.” Didn’t believe it for a second. But then I was like, Oh shit, it’s Gucci. He said he really liked my beats and wanted to jump on a track. Threw him on “Living in America.” Even though I don’t like it, it’s sort of a fair thing to do. He laid down a verse in L.A. I just sort of threw it out there, did a quick mix. I thought it was pretty fun. I love doing collaborations. It can be risky. Like Bowie and Mick Jagger. That was fucking terrible [laughs].

What’s the deal with the party hotline number (502-922-6Dom) on your website?
Basically, it was an idea I came up with on the tail end of an acid trip. I thought it would be a fun idea. Put it on Twitter and pretty much the line went crazy. We decided to give away tickets, free stuff, relationship advice, and all that. On the Ratatat tour we gave away ten free tickets a night. People who weren’t into us before gave us a chance, and we made a lot of new fans that way. It’s really cool.

Do people still call?
Yeah, all the time. Some days I can tell people don’t have a lot to do. But on beautiful days, like today, where I’m sure people are hanging out near a waterfall, like myself, blasting a boombox, just drinkin’ beers. Make sure you put the right number because Astralwerks put the wrong one on the back of our first release. It ended up being some poor woman’s number. Major fail.

It could be that I’m on a waterfall. Can you call me back a little later, maybe in fifteen minutes?

Last year you told Pitchfork that your song “Bochicha” was the theme song for the minor league hockey team Worchester Sharks. It wasn’t. What was that about?
I don’t know. I say a lot of things. Basically word got around. They were asked about it and denied it. They thought, Hey, this could be a lot of fun. They drew up a contract, made us an offer. We renegotiated, said we’d charge them less if they changed their name back to the Worchester IceCats, but they refused. So we said, screw this, it’s not worth our times. I’m still repping the Worchester IceCats. I don’t know what this Shark business is about.

Are you still not telling anyone your last name?
Yeah, not yet. Right now it’s not really important. I still have a lot of collections agencies that are after me. After this happened, I had to pay back three different landlords. It was like, are you serious, how did you find me, are you checking the blogs or something? Thankfully, because of this band, I got approved for a credit card I never should have been approved for. It, like, put my credit on steroids.

first impressions 1 min ago
Look, Lauren London Wasn’t Sure About You People At First Either “Why would these two people really like each other?” she recalled thinking.
how fortunate Yesterday at 11:09 p.m.
Apparently Matthew McConaughey Took Career Advice From a Fortune Teller He said he was stopped on the street and told to take a role in How to Lose a Guy in 10 Days.
overnights Yesterday at 9:01 p.m.
Ghosts Recap: The Ghost Trap 2000 Who ya gonna call when you need ghosts un-busted?
guestlists Yesterday at 8:34 p.m.
Which Celebs Love Ellen and Portia’s Love? From Kris Jenner to Prince Harry, here’s who attended the couple’s vow renewal ceremony.
prison Yesterday at 6:30 p.m.
Jafar Panahi Goes on Hunger Strike to Protest Detention at Evin Prison Panahi should have been released to await a retrial on charges stemming from 2009’s Green Revolution.
gender inclusivity Yesterday at 4:25 p.m.
& Juliet Actor Opts Out of Gendered Tony Award Categories “I felt that I had no choice but to abstain from being considered for a nomination this season,” Justin David Sullivan wrote.
overnights Yesterday at 3:24 p.m.
The Real Housewives of Miami Recap: A Tale of the Gringos If Alexia is going to pretend to be offended to get an apology out of Nicole, then at least accept the damn apology.
buffering Yesterday at 2:48 p.m.
Could Peacock Maybe, Finally, Be Having a Moment? The shows are clicking, but will it be enough for the struggling streamer? Content chief Susan Rovner is betting on it.
renewals Yesterday at 1:55 p.m.
The Traitors Triples Down on Mess With a Second Season and Andy Cohen Reunion Looks like Peacock has a reality-TV hit on its hands.
vulture 10x10 Yesterday at 12:00 p.m.
The YHLQMDLG Puzzle 5-Across, Six Letters: 9-Down, Four Letters: Fletcher in Confess, Fletch.
into it Yesterday at 11:29 a.m.
Lil Rel Howery Supports the Academy’s Andrea Riseborough Investigation But she’s not the person he’d drop from the Best Actress race.
c(omedy)-span Yesterday at 11:26 a.m.
Roy Wood Jr. to Host 2023 White House Correspondents’ Dinner ﻿Hopefully, Comedy Central sees how good the Daily Show correspondent is at filling a role held by Trevor Noah.
grammys 2023 Yesterday at 11:06 a.m.
The Grammys to Honor Hip-Hop’s 50th Anniversary With a Blockbuster Tribute Grandmaster Flash, DJ Jazzy Jeff, Run-DMC, Missy Elliott, Public Enemy, and dozens more will perform.
rock hall Yesterday at 11:00 a.m.
The Worst Snubs in Rock and Roll Hall of Fame History (So Far) Eight artists most deserving of induction.
By Joe Kwaczala
cancel culture Yesterday at 10:32 a.m.
If You’re Reading This, Your Favorite Show Is Canceled All the TV shows we’ve lost in 2023, including Reboot and Gossip Girl.
last night on late night Yesterday at 10:15 a.m.
Harrison Ford Reviews Jason Segel’s Penis He’s familiar with his Shrinking co-star’s body … of work.
overnights Yesterday at 10:00 a.m.
Poker Face Recap: You Can’t Kill the Revolution Irene and Joyce’s murder is pretty badass to watch — like if The Golden Girls joined Fight Club.
role call Yesterday at 10:00 a.m.
Debbie Harry Answers Every Question We Have About Videodrome The Blondie legend on the “sticky” consequences of dyeing her hair, how James Woods annoyed David Cronenberg, and her work on Tron — whatever that is.
trailer mix Yesterday at 9:44 a.m.
Perfect Match Is Squid Game for Dating Netflix’s most famous singles will take matters into their own hands February 14.
explainers Yesterday at 8:00 a.m.
What the Great Netflix Password Crackdown Means for You Let’s talk about it.
More Stories