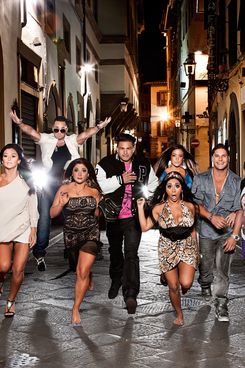 Before each season of Jersey Shore starts, diehard fans and those who watch religiously but, they insist, ironically, know a good 60 to 80 percent of what will happen. Blame it on extended trailers, relentless paparazzi coverage during filming, and the simple inability of these eight knuckleheads not to repeat the same mistakes over and over. Using everything we know about season four of Jersey Shore, which takes the cast to Italy on a mission of self discovery, we’ve assembled a handy cheat sheet of what we know happened in Florence and what we think might have. There’s at least one thing, though, that we can all agree probably didn’t happen: That whole self-discovery thing.

What to Expect From Jersey Shore’s Fourth Season: 17 Certainties and Predictions

trust me 26 mins ago
Black Adam Didn’t Do That Bad, Says Black Adam Star The Rock He said he confirmed with financiers that the movie will actually make a profit.
freaky friday Yesterday at 10:08 p.m.
Just Imagine the ‘All Too Well’ Short Film (Guillermo’s Version) Taylor Swift said she’d like to swap places with filmmaker Guillermo del Toro for a day.
overnights Yesterday at 9:07 p.m.
The Real Housewives of Salt Lake City Recap: Charcuterie Overboard People in glass houses shouldn’t throw shoes.
autopsy Yesterday at 8:13 p.m.
Anne Heche Wasn’t Drunk or High During Car Crash, Coroner Says Her official cause of death has been determined to be inhalation and thermal injuries.
let's go party Yesterday at 5:52 p.m.
Greta Gerwig’s Barbie World Keeps Getting Bigger Ken we talk about Ryan Gosling for a sec?
boston voice: wicked! Yesterday at 5:49 p.m.
Thank Goodness, the Wicked Movies Are on the Way What is this feeling? Oh, yeah, excitement.
alien superstar Yesterday at 4:52 p.m.
Avatar 2 Will Show Us the Way of the Weeknd His song for The Way of Water soundtrack drops December 15.
news from shondaland Yesterday at 3:29 p.m.
Grey’s Anatomy Scammer Elisabeth Finch Wants to Write on Handmaid’s Tale Next After admitting she “never had any form of cancer.”
buzz! buzz! Yesterday at 3:04 p.m.
It’s Almost Yellowjackets Season Citizen detectives, there’ll be a break in the case on March 24.
1.5x speed Yesterday at 2:17 p.m.
Bad Men, Weird L.A., and 8 More Podcasts Worth Checking Out Welcome to the Night Vale team’s latest world.
dolls kill Yesterday at 2:09 p.m.
Robot Renesmee Hits Some Choreo in M3gan Bolstered by her viral success, M3gan is coming for your necks, your wigs, and an innocent old woman.
gma3 goss: what you need to know Yesterday at 2:08 p.m.
Every Detail of T.J. Holmes and Amy Robach’s GMA3 Drama in Chronological Order There has been an embarrassment (and we do mean that word) of detail.
sundance 2023 Yesterday at 1:01 p.m.
Cat Person Has a Date at Sundance Film Festival 2023 As part of the lineup for the in-person and online programs.
real boys Yesterday at 1:00 p.m.
Pinocchios, Ranked What is it about this little wooden boy that’s resonated for 150 years?
my single is dropping Yesterday at 12:23 p.m.
Did You Know That There’s a Lana Del Rey Album Coming Next March? Did you know that there’s a tunnel under Ocean Blvd features Bleachers, Father John Misty, and her pastor.
vulture 10x10 Yesterday at 12:08 p.m.
The Memory Puzzle 9-Across, Nine Letters: Clarice Starling and Gracie Hart.
best of 2022 Yesterday at 11:30 a.m.
The Best Songs of 2022 This year’s music provided a fleeting and desperately needed moment of salvation.
broadway bye-byes Yesterday at 11:26 a.m.
KPOP to Close on Broadway Two Weeks After Opening The final performance will feature a panel on AAPI representation on Broadway.
snl Yesterday at 11:03 a.m.
Jerry Minor’s Ride From Flint to Mr. Show, SNL, and Beyond The actor and comedian reflects on his very long and very busy comedy career.
By Andy Hoglund
pcas 2022 Yesterday at 11:00 a.m.
Shania Twain’s People’s Choice Awards Medley Did Impress Us Much With ample sparkles, cowgirl dancers, and a jab at Ryan Reynolds.
More Stories