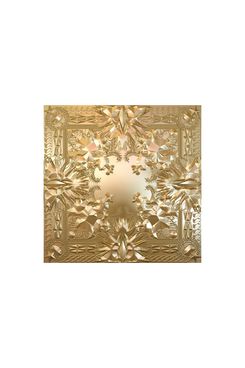 First of all: Watch the Throne actually, amazingly did not leak. For the first time in forever, a highly anticipated album made it to its release date untouched. XXL has a full breakdown as to how, but basically it’s because no one — not even the folks at the record labels — had physical copies. The album was released to iTunes today, ahead of its retail release on the 12th, and will be at Best Buy exclusively until the 23rd. And Jay and Kanye recorded everything in person, meaning no e-mailing of tracks back and forth, and no chance for hacking. So even if the actual album ended up being a massive disappointment, it would have this one shining accomplishment of which to speak.

Good news, though: It’s not a massive disappointment! Let’s get the practical stuff out of the way. If WTT is to launch a big single, it won’t be the previously released “H.A.M.” (now relegated to bonus-track status) or “Otis.” It might, however, be “Lift Off” — thanks, appropriately enough, to the presence of Beyoncé, the same lady who refused to grant us a hit on her own recent album. It also might be album closer “Why I Love You,” which, as previously mentioned, is built on this sick Cassius sample. (Unrelated: Justin Vernon, who is on “That’s My Bitch,” did not know he was on “That’s My Bitch.” Also, Kanye said people look at him like he’s Hitler this weekend, which is weird because there is a perhaps unwise “this is something like the holocaust” line on this album.)

In general, Watch the Throne works better than it maybe should. It’s a pairing of the two biggest rap stars alive (sorry, Wayne!), so bombast is a must. And, indeed, it’s all extremes: extreme shit-talking on one side; extreme emotional weariness on the other (things get real megafame-martyr-y on “Welcome to the Jungle.” Also, the album ends on a version of the “Forgive them, Father, for they know not what they do” prayer. Swag). Really, that kind of thing should get exhausting after a while. It doesn’t.

Partially that’s because Kanye does know when to pull back on the beats. ‘Epic’ is the default setting, but things get minimalist and sinister almost as often. And partially, it’s the simple joy of hearing these two go back and forth, not verse for verse, but often line for line. That means that, most likely, they sat down and wrote lyrics together, then allocated out what made sense for who to say, and that’s pretty fascinating. That isn’t to say that both haven’t rapped better elsewhere (Jay from 1996 to 2003, when just the sound of his voice could put hairs on your chest, and he wasn’t so into clichés and lame modern art references; Kanye on My Beautiful Dark Twisted Fantasy, where he got to get emo within all his hugeness). But this is a level of collaboration beyond what we could have expected, and it’s very much appreciated. Wisely, all guest verses have been excised. The focus the whole time is on the strange, rarified air where both these guys exist. Unsurprisingly, it’s a fun place to hang out.

Leaked: Take a Deep Breath, Everyone — Kanye West and Jay-Z’s Watch the Throne Is Here Now