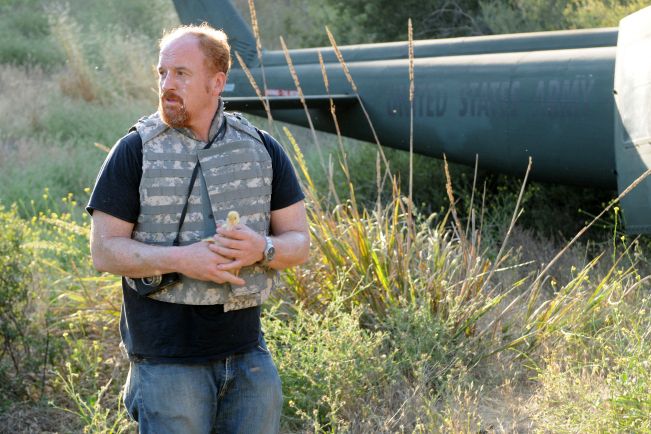 Last night, Louie traveled to Afghanistan, where he became the latest in a long line of smirking funnymen — Bob Hope, Robin Williams, Dick Cheney — to visit the front lines and attempt to cheer up the troops. It was a notable night of firsts: The first hour-long episode of Louie; the first onscreen credit for Louis C.K.’s 6-year-old daughter, who came up with the idea; and the first non-PBS TV show to include a lengthy aside about duck anuses.

Indeed, the opening stand-up routine for “Duckling” was appropriately fowl-o-scentric. “Ducks have one hole,” he says. “And they pee out of it, and they shit out of it, they get fucked in it, and they lay eggs out of it. That has to got be one smelly, dirty hole. I feel a little bad for the man duck.”

We then see him at Jane’s school, where we catch an awkward glance between Louie and Dolores — the pragmatic one-night-standee from “Blueberries — and where the teacher informs Louie he’ll have to take care of the class ducklings for the night. Louie explains that he’s heading off to Afghanistan in the morning, but the kids’ gleeful screams make it clear that he has little choice in the matter. Once home, he dumps the duckies in the tub (adorable!), listens as Jane repeatedly begs to keep one of the critters (even more adorable!), and eventually retreats to the bathroom, where he pops a window and smokes one of the joints he keeps hidden in a soap-bar box.

And then: We’re in Afghanistan, where Louie joins a USO regiment that includes country singer Keni Thomas and a pair of barely legal cheerleaders, one of whom Louie halfheartedly tries to pick up by name-dropping such youngster-beloved rock groups as Van Halen (“I’m not sure who they are”) and Aerosmith (“not sure”). A general spells out the challenges they’ll be facing: “You’re gonna see some things in the next five days that you’ve never seen or imagined … these are dangerous places. Some of you may take some fire.” Louie, understandably, begins to look a bit wigged out.

When Louie unpacks, he makes two discoveries: (1) Keni is a gun-toting Army ranger; and (2) Lily has stowed away one of the ducklings in his suitcase, with a note saying it’ll keep him from getting hurt. That night, on a makeshift stage, Louie performs for the troops, and while they love his dick jokes and sagging-ball gags, one of the cheerleaders does not. “They’re kind of disgusting, the things you say onstage,” she notes. “Why can’t you say Christian things and be funny?” Louie, trying to prove he’s not a gross old man, whips out his duckling under the table. She lights up, but when Louie asks if she’d ever date an older guy, she reacts with disgust.

The group takes a helicopter to its next gig, performing for a remote outpost called Camp Timothy (“Duckling” is dedicated to Restrepo co-director Tim Hetherington, who died in Libya earlier this year). Just as they arrive, there’s a burst of enemy fire, and Louie takes cover nearby; when it turns out to be harmless, Louie seems visibly more rattled than the rest of the gang. In fact, his quietly freaked-out demeanor seems to grow louder as the episode goes on. If only he’d packed his soap-bar box.

Camp Timothy is a small setup — just a tent and a dozen or so troops — and Louie seems a bit hesitant at first. But after a heartfelt POW ode by Keni, Louie wins the crowd over with a series of harsh one-liners aimed at one of the greatest threats facing the country: Buffalo, New York. “The only thing worse than being in Buffalo is being in a hotel room, trying to find how far you can get your finger into your own asshole,” he says, quoting W.C. Fields. Amazingly, some of the troops shake Louie’s hand after that remark, and he even joins them to play soccer with a group of nearby Afghani nationals.

That game’s quickly kiboshed, however, when the helicopter arrives to take Louie to his next destination. And here’s where Louie’s fears come true: The ‘copter buckles and lurches, finally making an emergency landing in an open field. As the group waits for help, a nervous Louie makes pants-wetting jokes and sloppily applies sunscreen to his face, but he’s interrupted when several gun-wielding locals approach the ‘copter. “Is that worryable?” he asks. Turns out it is, and there’s a tense back-and-forth between both groups, one that’s finally broken when the duckling escapes from Louie’s backpack. He trips and falls on his sunscreen-slathered face, much to the delight of the Afghanis, who play with the duck and eventually gather around to hear Keni sing.

Then, in a moment so deftly handled you need to watch the episode twice to allow it to fully sink in, Louie quietly hands off the duckling to young Afghani girl. It might just be a simple peace offering, or it could be an attempt to pass on the bird’s safekeeping powers to somebody who could use them more than Louie. It’s a fittingly subtle end to one of the series’ most restrained episodes, one that’s affecting but never mawkish, and which uses its expanded running time to let the story stretch out and relax rather than overload it. “Duckling” is one of the best examples yet of how Louis C.K.’s dueling impulses — deep-souled humanism and bitter honesty — often steer him in the same direction, and the results are so powerful, it’s hard not to get a bit sniffly by the end. Even if you only have one hole.

overnights 16 mins ago
Below Deck Mediterranean Recap: Courtney’s Ready to Twerk After the drama from last week, Natasha goes AWOL and gets on Kyle and Natalya’s nerves.
birthday presents 8:34 p.m.
Nipsey Hussle Has Been Posthumously Honored With a Hollywood Walk of Fame Star The ceremony took place on what would’ve been his 37th birthday.
tweet tweet 6:42 p.m.
Viola Davis Will Be the Head Honcho of the Hunger Games Prequel She’ll star in The Ballad of Songbirds and Snakes as Dr. Volumnia Gaul.
breakups 6:27 p.m.
Michelle Branch Files to Divorce the Black Keys’ Patrick Carney She took the step a day after announcing their split online.
oscars 1973 6:17 p.m.
The Academy Finally Apologizes to Sacheen Littlefeather for Mistreatment The Indigenous activist was booed at the 1973 Oscars for protesting Native American mistreatment.
what we know 6:15 p.m.
Salman Rushdie Is on the ‘Road to Recovery’ Following Gruesome Attack The acclaimed author was grievously wounded and remains hospitalized but was taken off a ventilator and again able to speak on Saturday.
respect the classics 5:50 p.m.
Everyone Thank South Park for Reuniting Rush Geddy!! Alex!! Emotions!!
coming soon 5:27 p.m.
Succumb to The Lord of the Rings: The Rings of Power Daddy Bezos wants your sweet, sweet attention.
you know nothing 5:22 p.m.
The Game of Thrones Prequel House of the Dragon Is Here at Last All the lore, just in time for its August 21 premiere.
the industry 4:04 p.m.
Drake Just Broke Another Beatles Record on the Charts Leave it to DJ Khaled to sneak his way into music history.
deux plus 3:45 p.m.
The Latest Player in the Streaming Wars Is … Walmart? It’s struck a new deal with Paramount+.
overnights 3:19 p.m.
A League of Their Own Season-Finale Recap: The Long Walk Home It’s the bottom of the ninth.
overnights 2:54 p.m.
Flatbush Misdemeanors Recap: Sippin’ on Some Sizzurp It was inevitable that Drew would find out that Dan was responsible for his current spate of misfortunes.
overnights 2:49 p.m.
A League of Their Own Recap: Take Your Shot Things are not going peachy for the Rockford Peaches.
dancing through life 2:40 p.m.
Solange Is On Her Way to the Ballet New York City Ballet has commissioned Knowles for a composition, to premiere September 28.
hbo axe’d 2:25 p.m.
The HBO Max Layoffs Have Started Fourteen percent of the streaming service’s team, including most of the unscripted division, was sent pink slips.
trailer mix 2:17 p.m.
Guillermo del Toro’s Cabinet of Curiosities Exposes the ‘Beautiful and Horrible’ What’s weirder than Rupert Grint and Nia Vardalos both starring in a horror anthology?
mind the pay gap 1:41 p.m.
Bryce Dallas Howard Made ‘Much Less’ Than Chris Pratt on Jurassic World Sequel “The reports were so interesting because I was paid so much less than the reports even said.”
grand theft oscar 12:04 p.m.
CODA Star Troy Kotsur’s Oscar Inadvertently Stolen by Local Juveniles They nabbed his Jeep (which doubles as a trophy cabinet).
vulture 10x10 12:00 p.m.
The Abel Puzzle 14-Across, Five Letters: Decide to get the Vulture 10x10 newsletter, say.
More Stories