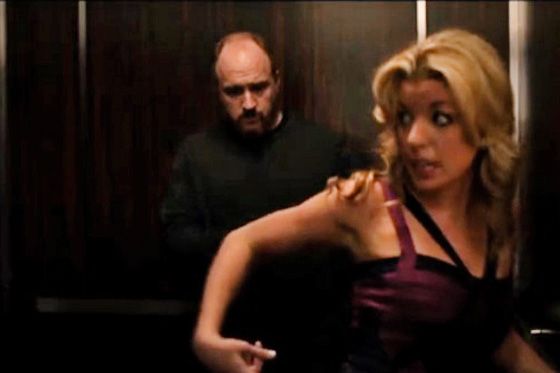 TV and masturbation have an appropriately up-and-down relationship: In the early nineties, shows like Seinfeld and Roseanne treated it as just a normal (albeit hilarious) part of life — yet, at the same time, they weren’t permitted to use the m-word on the air, thus making it seem even more taboo. Twenty years later, it’s now used as a plot point-slash-punch line on so many newly liberated cable dramas and wannabe-edgy network series that it almost feels not taboo enough. We get it, Ryan Murphy! You have a special “OUTCAST TEEN YANKS IT” shortcut key on your Final Draft (most likely B+8+the open Apple sign)!

Now, in theory, watching a 43-year-old guy whack off to the image of a woman being slapped with a bag ol’ phalluses makes for pretty disgusting TV. Yet the elevator scene is hilarious and weirdly endearing, rather than sick and sad. It helps that, even in his masturbatory dreamworld, Louie seems uncomfortable about the whole thing; he imagined this scenario, but he also realizes how awkward it would make him feel (in fact, that awkwardness would be one of the reasons he finds it so arousing in the first place — for Louie, abject weirdness equals verisimilitude).

Afterward, Louie goes to a CAM meeting and takes Ellen out for a drink, though he’s not sure how to communicate with a woman when he’s not trying to sleep with her. “You kind of need that incentive to bring out the charm,” he says. She dares him to pretend he has a chance. “It’ll be fun to watch,” she says.

There, she changes into a bathrobe, sits next to Louie on the couch, and rebuffs his awkward attempt to make out. What if, she asks, they could achieve a heightened connection by not making out or having sex — but by slowly getting to know one another and falling in love. “We’d get excited just to hear each others’ voices and feel pent-up desire,” she says. Eventually, she says, they’d get married, and “because we waited, the first time and every time afterward would be so passionate and so free. I bet you’ve never had sex one time in your life like that, where there’s no shame and no fear.”

Liz Holtan, who plays Ellen, does an excellent job with this monologue, turning what could have been a clichéd, Harriet Hayes–style strident Christian into a thoughtfully pragmatic true believer. For a moment, it even looks like Louie’s buying into her idea — and in fact, it excites him so much he has no choice but to head to her bathroom, where he masturbates, climaxing with a long, flat-tire-sounding fart (a trait that apparently runs in the family). He knows Ellen’s proposal would likely lead to mind-bending, life-alternating sex. But it also seems like a whole lotta work.

In the end, we watch Louie, back at home, M*A*S*H-turbating to old newswire images photo of Loretta Swit. But when the BBC radio kicks on with grisly tales of African genocide, he gives up. Sometimes, you’re just too beat down to beat off.

Louie Recap: Master of Your Domain