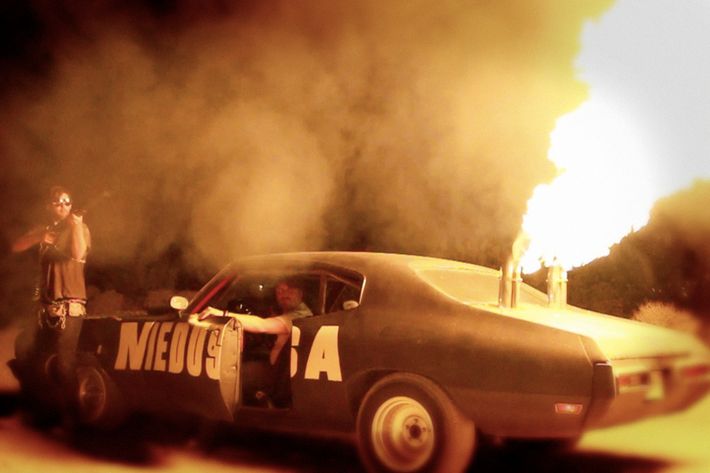 If you’ve ever been on the West Coast when the Santa Ana or “devil” winds come in, you’ll recognize the sulfurous air of Bellflower, a love-hate story suffused with bad vibes. Writer-director Evan Glodell spells out his influences up front. He plays Woodrow, a recent Midwestern transplant to Los Angeles who, along with his pal, Alden (Tyler Dawson), watched Mad Max at a dangerously impressionable age and became obsessed with planning for the end of civilization, after which they’ll both “rule the wasteland” like their avatar, Lord Humongous, in a souped-up apocalypse mobile named “Medusa.”

After a flurry of images foreshadowing the tumult to come, Alden successfully tests a flamethrower, and Woodrow and a free-spirited chick, Millie (Jessie Wiseman), meet sickeningly cute — i.e., both sickening and cute, competing against each other in a cricket-eating contest at a bar that’s more like an Artaudian Theater of Cruelty. On their first date, she asks him to take her to the “creepiest, scariest” place he knows; he says it’s in Texas, and she says, “Let’s go.” She warns him against dating her. (“You don’t want to be my boyfriend. I’ll hurt you and I won’t be able to help it.”) But for a man with conflagration on the brain, fucking with trouble is a no-brainer.

Friendship, alas, doesn’t lighten the mood. Millie’s housemate (Vincent Grashaw) hovers jealously around the couple, while Alden, very much in Woodrow’s shadow, can’t seem to make a move on Millie’s pretty friend (Rebekah Brandes). Every relationship — even the Midwestern buddies’ — is pregnant with resentment, longing. Booze and dope stoke the flames, with things going bad before they literally go bad. The betrayals and eruption of violence are almost redundant.

Bellflower, a hit at Sundance, is one of those all-in indies that functions like an Alien facehugger: It grabs hold of you, gets in your bloodstream, and gestates. The light is orange and malignant, the film often overexposed. The distant cityscape seems coated with crud, and every dead insect on the lens is like badge of integrity. The camera fastens on the back of Woodrow’s neck as he pisses — which is, as they say, an “artistic choice” you don’t see too often. Even the poster on Woodrow’s wall is of Jim Morrison declaring, “No one gets out of here alive.” Is it too much? Yes, but too much of a bad thing is Glodell’s worldview: too much testosterone fermenting in the L.A. sun, too much fetishizing of the apocalypse. It’s fin de siècle every day, folks.