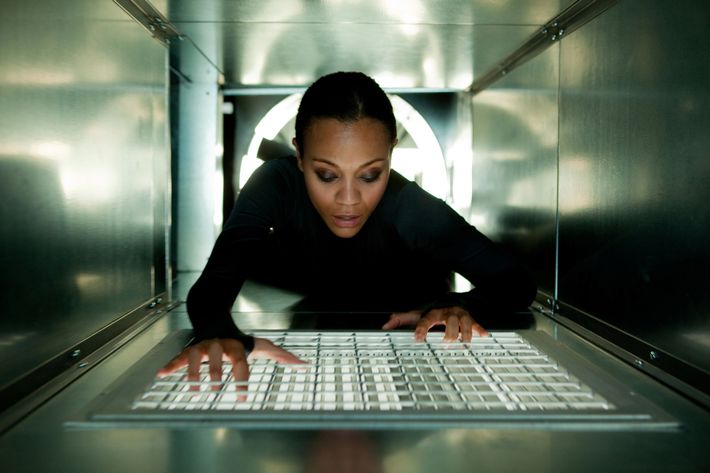 Luc Besson’s Jumping Frog Action Factory looks mighty lame in Colombiana, which features Zoe Saldana as Cataleya, an orphan turned hitwoman out for vengeance. The child actress who plays Cataleya when her parents are slain by a Bogota crime lord is strikingly robotic, and Saldana is only marginally more animated. She’s dressed and shot to emphasize her sylvan frame, with its endless thighs and tidy derriere, and she steals across rooftops and wriggles through ventilator shafts with aplomb, like Feuillade’s Irma Vep crossed with Besson’s la femme Nikita. But Saldana’s thinness is also alarming: You say, “Yowza!” and then, “Yikes!” In close-up, she’s drawn and hollow-eyed, with a voice that — even if it’s hers — doesn’t sound as if it’s coming from her head. She’s too listless and strung-out and weirdly disembodied to make you feel much empathy.

There’s bad acting all around, but you can’t fully blame the performers. The dialogue needed a writer to come in and punch it up — the lines sound like placeholders. The director, who goes by the name of Olivier Megaton, did snazzy work in another Besson-produced thriller, Transporter 3, but in that one he had Jason Statham — a witty actor as well as an athlete — to ground the action. Here, the fast cutting isn’t in sync with the heroine’s heavy spirit, and Megaton’s tricks are getting old. Your granny would roll her eyes at the hyperspeed rat-tat-tat interspersed with shell casings bouncing in slow motion.

Colombiana has one good fight, hand-to-hand in a bathroom between Saldana and Jordi Molla as the one bad guy with a distinctively creepy vibe: He likes being intimate with the people he kills. Megaton cuts the action so fast that the blows are half seen, like colliding streaks of light and dark, almost abstract. But the movie is abstract, too, and passionless. When Johnny Cash’s “Hurt” — one of the most heartfelt covers ever recorded — played over the closing credits, I wanted to storm the projection booth and turn off the sound. Now that would be the basis of a rousing action picture.