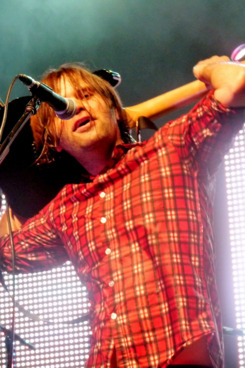 In this particularly grim installment of Out on the Weekend, bands like Death Cab for Cutie and Death From Above 1979 collide and leave behind a messy, guitar-strewn Trail of Dead (who are also in this week’s slideshow). Also included are snapshots of less macabre acts, from Rakim and EPMD dropping rhymes all over Central Park to Erykah Badu and Nas at Rock the Bells on the opposite coast, and tons, tons more. Check it all out in a safe and non-deadly manner!

This Weekend’s Concerts, From Death Cab to Death From Above 1979

my single is dropping 27 mins ago
Dwyane Wade Continues Thriving, Makes Rap Debut On Track with Rick Ross An ESPN documentary and a rap single all in one week.
new music 12:52 a.m.
Grimes Has Given Birth To Her 5th Studio Album Miss Anthropocene It’s a happy, healthy 15 tracks long.
holy cow Yesterday at 11:34 p.m.
Joaquin Phoenix Saved a Newborn Calf the Day After Winning an Oscar, As One Does Get you a man that can do both.
trailer mix Yesterday at 8:35 p.m.
Westworld Season Three Trailer Won’t Help You Remember Season Two The robot revolution begins March 15.
what? Yesterday at 8:24 p.m.
Trump Is Angry That Parasite Won Best Picture Instead of Gone With The Wind It’s so… metaphorical.
theater review Yesterday at 8:00 p.m.
In the New West Side Story, When You’re Onstage You’re Onscreen All the Way From your first tracking shot to your last camera play.
broadway Yesterday at 7:30 p.m.
Broadway’s The Inheritance Will Close March 15, Not Quite Living Up to That Hype The two-part gay drama won acclaim in London, but couldn’t translate that into success in New York.
you don't own them Yesterday at 4:51 p.m.
Bette, Diane, and Goldie Are Getting the Band Back Together The First Wives Club cast reunion movie is now called Family Jewels, and it’s really happening.
crime Yesterday at 3:52 p.m.
Everything We Know About Pop Smoke’s Death The 20-year-old Brooklyn rapper was killed at a home in Los Angeles, but police are still looking for a motive.
theater Yesterday at 3:30 p.m.
Tracy Letts and Armie Hammer Swear Their New Political Play Isn’t About Trump It was a Pulitzer finalist in 2018.
trailer mix Yesterday at 2:41 p.m.
The Run Trailer Stars Sarah Paulson As a Smothering, Terrifying Mother Boundary issues.
roll clip! Yesterday at 1:45 p.m.
My Brilliant Friend Season Two Trailer Will Have You Booking Flights to Italy We return to Naples on March 16.
🚓 Yesterday at 1:13 p.m.
Comedy Central’s Reno 911! to Return for a Seventh Season on Quibi And the full cast is coming along.
a long talk Yesterday at 12:58 p.m.
How Zoë Kravitz and Nick Hornby Became High Fidelity Playlist Buddies The star of the Hulu series loved the novel that inspired it, so she reached out for the author’s blessing — and wound up with a collaborator.
By Jen Chaney
tv review Yesterday at 12:58 p.m.
Hunters’ Over-the-Top Holocaust Revenge Fantasy Misses the Mark Amazon’s new Nazi-hunting pastiche goes out on many limbs, but can’t hold its balance on any of them.
baby yoda Yesterday at 12:30 p.m.
Disney’s New Baby Yoda Toy Makes Cooing Noises, As Will You When You See It Excuse me, The Child.
the law Yesterday at 11:49 a.m.
All Your Questions About Jussie Smollett’s New Indictment, Answered The actor faces new charges that he “planned and participated” in staging a hate crime against himself last year. Here’s how we got here.
By Natalie Hope McDonald
trailer mix Yesterday at 11:42 a.m.
Little Fires Everywhere Trailer Stars Kerry Washington, Reese Witherspoon, Rage Based on the book by Celeste Ng.
movie review Yesterday at 11:39 a.m.
Not Quite Revisionist, Not Quite Faithful, Emma. Is an Eventual Delight This millennial-branded Jane Austen adaptation is a perplexing but satisfying take on a classic.
By Alison Willmore
synergy! Yesterday at 11:22 a.m.
Showtime Welcomes RuPaul’s Drag Race All Stars to the Stage And right after telling Ray Donavan to sashay away! It premieres June 5.
More Stories