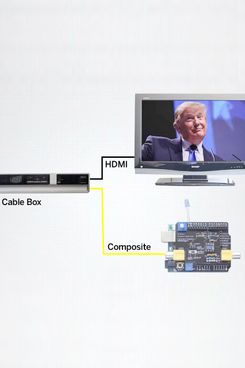 Vulture Bytes is coming to you this week from 38,000 feet off the ground, where both of our seatmates are on their iDevices, distracting themselves from the reality that they’re moving hundreds of miles an hour inside of a giant metal tube. As always, we have five distractions of our own to offer: a photo app that makes everything look good and wide, an app that gives you all the news about bands you actually listen to, a D.J. app for beginners, a free copy of Shazam, and a way to make sure you never hear Kim Kardashian speak ever again.

Pretty soon it’s going to be inexcusable to take boring photos. Every week it seems there’s a new photo app that radically changes the way we think about what our smartphones — and, better yet, we — can do. The latest: Pano, an app for Android that lets you stitch together as many as sixteen photos into one really amazing panoramic picture. Supposedly it works really well (Vulture Bytes isn’t an Android user), detecting and erasing something that’s on the border of one shot but not the other, which is where these panoramic shots can often get amateur. There’s an iPhone version, too, but Gizmodo reports that for now it’s using an older version of the software that doesn’t piece together the pictures nearly as well. So, you Android people: go climb a mountain, take a stunning 360 picture of a sunset, and mail it to Vulture Bytes? Make us snobby iPhone users jealous.PRICE: $2
If you go to the Future of Journalism conferences that Vulture Bytes often finds itself in, you’ll hear a lot about the future of curated news. The optimists will tell you that in the future/present, everyone will want to read news because it will be curated to our exact desires. Facebook will know that we share things about Breaking Bad, so it will be sure to surface any link one of our friends shares about the show. The pessimists will tell you that that kind of curation actually prevents people from getting the news that they want, since they don’t know what they want until they discover it. Vulture Bytes, by nature a crochety Luddite, has always fancied itself belonging to the latter cabal. But then we saw Bandito, an ingenious little app from Public Radio Exchange that scans your own music library to bring you news about the artists in it. It’s a better RSS feed than you could ever hope to put together yourself. It’ll do an even better job at giving you the news you want to read than Vulture does. And that’s saying something.PRICE: Free
MiniMash is what would happen if Playskool made a D.J. app. It looks like it was designed in 1982, with an uneven font, graphics that would make the original Nintendo look good, and an interface that’s far simpler than even analog D.J. decks. But hiding behind the simple front is a pretty robust D.J. app for beginners, a program that’ll help you build an intuition about which songs work well together and which don’t match up. After you install it, MiniMash analyzes your music library to gather the speed of each song’s beat and help you blend them the right way. You can crossfade, loop, set tempo, and a bunch of other things budding D.J.’s will want to mess around with. When you perfect your mix, record it, upload it, and brag about it until your friends tell you to get a new hobby.PRICE: $2
Next time you’re at Starbucks, order your Americano with a Shazam on the side. Starbucks has started to give away apps the way it gives away music. “Pick of the Week” app cards are probably hanging out somewhere near your barista, and this week they’re giving away Shazam Encore, the name-that-tune app that was one of the first things on the iPhone that really made people say “wow.” Starbucks won’t say whether the promotion is going to extend beyond Shazam, whether it’s replaced the company’s free music program, or how the apps get selected. But for now, who cares! It’s free! (Besides it furthering your connection to a place where you spend $20 a week on caffeine and/or $50 a month trying to get coffee stains out of your clothes.)PRICE: Usually Shazam Encore costs $6; depending on your coffee order, the Starbucks promo will cost you less than that.

overnights Yesterday at 10:45 p.m.
The Real Housewives of Salt Lake City Recap: Arizona Tea The ladies’ first healing session comes not a moment too soon.
coming soon Yesterday at 7:49 p.m.
Vanessa: Blumhouse Is Making a Five Nights at Freddy’s Movie Freddy: The movie’s been in development since 2017!
memoirs Yesterday at 6:59 p.m.
8 Revealing Stories From Constance Wu’s Memoir, Making a Scene Including sexual-harassment accusations on the set of Fresh Off the Boat and the response an actress sent to those tweets.
development hell Yesterday at 6:57 p.m.
Jamie Foxx’s Spawn Movie Gets Three New Writers The project has been in development since 2017.
reading the will Yesterday at 6:39 p.m.
Wynonna Judd Denies Rumored Feud With Sister Ashley Over Naomi’s Will She says she has no plans to contest her mother Naomi’s will.
allegations Yesterday at 6:19 p.m.
Scrubs Writer Eric Weinberg Charged With 18 Counts of Sexual Assault Eric Weinberg allegedly preyed on women under the guise of doing photo shoots.
haus arrest Yesterday at 5:53 p.m.
Anna Delvey Will Stay in the U.S. on House (and Social-Media) Arrest She scammed her way out of ICE deportation, and it worked.
switched on pop Yesterday at 5:42 p.m.
Santigold Was Combusting From the Pressures of Life Creating her new album, Spirituals, was “my way to escape and create some beauty and light to grasp onto and move toward.”
party report Yesterday at 4:25 p.m.
Cate Blanchett Picked Out Her Own Power Suits in Tár Alongside costume designer Bina Daigeler.
on the record Yesterday at 4:24 p.m.
A Timeline of the Allegations Against Amsterdam Director David O. Russell Christian Bale confirms he acted as a “mediator” on the set of American Hustle with Amy Adams.
dinner party Yesterday at 3:24 p.m.
One Simple Trick Can Fix House of the Dragon’s Lighting Problem And any other shows that look like they were shot during an eclipse.
coming soon Yesterday at 3:23 p.m.
Violent Night Trailer: Santa David Harbour Gives Out ‘Season’s Beatings’ Santa Claus? More like Santa claws your eyes out.
book review Yesterday at 3:20 p.m.
Radiation Takes Center Stage, for Better or Worse, in Trinity, Trinity, Trinity Japanese history and “unseen forces” propel Erika Kobayashi’s science fiction thriller, sometimes at the expense of its own characters.
overnights Yesterday at 3:13 p.m.
Bachelor in Paradise: The Beach That Makes You Chaotic There’s simply too much happening and everyone is crying.
best of 2022 Yesterday at 3:00 p.m.
The Best Comedy Books of 2022 (So Far) Featuring funny haikus, an SNL alum’s memoir, and an academic exploration of right-wing humor.
By Brian Boone
mustache Yesterday at 2:39 p.m.
Bob Weir Might Be the Best WWHL Guest Ever? Telling wild stories about the Grateful Dead, Janis Joplin, and a ghost.
method Yesterday at 1:55 p.m.
Christian Bale Can’t Act If He Gets to Know His Co-stars That or he just doesn’t want to hang out with anyone in Amsterdam.
a long talk Yesterday at 1:54 p.m.
Danger Mouse Has the Cheat Codes Exploring 20 years of hits, surprises, and DOOM stories with the elusive producer.
By Craig Jenkins
explainers Yesterday at 1:30 p.m.
‘No One Has Been Ruled Out’ of Facing Charges in Rust Shooting Alec Baldwin has settled a wrongful-death lawsuit with Halyna Hutchins’s family — and filming is set to continue.
gnar Yesterday at 12:59 p.m.
Brendan Gleeson Shreds Mad Stage at Saturday Night Live He’s so sick of the posers!
More Stories