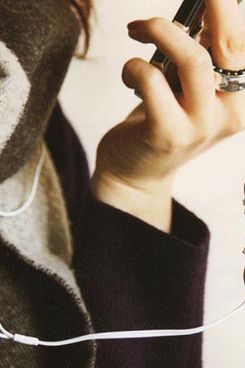 Last night a 3-year old woke up crying in Massachusetts, caught in a nightmare he couldn’t reason himself out of. Vulture Bytes and friends came to the rescue, but he wouldn’t stop wailing. With nowhere else to turn, we picked up the iPad. Two minutes later, Tangled was streaming through Netflix, and a minute after that the kid was quiet. It’s the kind of thing that reminds you why all this technology is worth it. Speaking of! This week: turning yourself into an avant-garde artist, accessories to help store your headphones, a way to make use of your fidgeting, a YouTube dance-party-maker, and throwing your own Riverdance.

When some art gallery inevitably has the first exhibit solely featuring iPad-generated art, much of it better come from Composite, a new app from James Alliban. The app is collaging for dummies; your materials all come from whatever your iPad 2 sees. Composite turns on your camera and streams the camera’s view onto your canvas. As you slide your finger across the screen, it reveals whatever’s in that part of the shot. If you touch your finger on the same spot after you’ve moved the iPad a bit, a new image will be imprinted on top of the old one, creating the kind of double exposures that you usually only see in pictures from the seventies. Even if you aren’t going to buy the app, it’s worth watching Composite’s demo video to fully understand how versatile it is as an art form. This is the kind of thing you take out and show when people doubt why anybody needs an iPad (or when your significant other doesn’t understand why you need to upgrade from an iPad 1).PRICE: $2
Some of our world’s best minds have been hard at work solving an intractable social issue: what to do with excess headphone cord. And so finally, after months of experimentation, two teams of innovators have come up with two different solutions. First there’s the to-mo-ni, an elegant piece of wood shaped like a figure eight for you to wrap your cord around while you listen. And once you’re done you can move the cord to Budwrap, a silicone bracelet that lets you carry around your headphones as a fashion statement. Help save the world one headphone coil at a time.PRICE: You’ll have to import the to-mo-ni for between $16 and $25, plus shipping. The Budwrap is a domestic affair, on Kickstarter for $15. Or, learn how to neatly wrap your headphones using only your fingers for $0.
Are your hands never still? Do you fidget your fingers against the table at all hours of the day? Have your friends threatened to kick you out of the house because of all the noise you’re making by drumming everything in sight? Then you might have Restless Finger Syndrome, a debilitating disease that is especially pronounced in this era of multi-touch electronics. While doctors are still searching for a cure, now there’s at least a way to make your disease productive. Tabledrum is an app that maps different professional drum sounds onto the amateur drumming you’re doing on the table. Think of it as a translator — you’re still be talking as much, but at least your new language sounds a bit more pleasant on the ears.PRICE: Currently on sale for $1
Vulture Bytes was talking to Papa Bytes a few weeks ago when he came up with a great idea: Why not have an app that lets anyone at a party add songs to the party’s master playlist? We explained that with new sites like Turntable.fm, we’re getting close, but he’s right — to our knowledge, there’s nothing that lets people crowd-source an ad hoc playlist. In the meantime, we’ll have to make do with Turntable and this Google+ Listening Party technique that Gizmodo helpfully wrote up last week. It’s not really that complicated: (1) Start a Hangout inside Google+. (2) use the YouTube widget to embed a video. (3) Dance. But don’t forget everybody can see you.PRICE: Free
It’s Riverdance on iPhones, iPads, and Android phones. Is there more description necessary? Sure there’s a way to buy tickets, watch YouTube videos, compete in Riverdance “competitions” (for now there are none listed), and “discover the meaning and motivation of each Riverdance scene.” But you’re either getting this app or not getting this app no matter what we say. Something tells us you’re getting this app.PRICE: Free