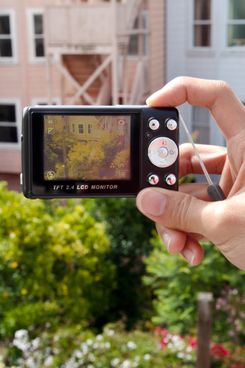 This week: an app that transforms your iPod library, speakers that transform a gas can, a camera that transforms a landscape, a critic that has transformed his brand, and an iPad case that will transform the way you remember Trapper Keepers. Basically, Michael Bay has been in our thoughts.

Imagine an app that makes every song on your iPod sound like it was sung by Enya’s ghost. That is Sound Epic, an app that makes your music up to sixteen times slower than it already is. We were expecting a cartoonishly slow sound, but what we heard instead was a haunting deconstruction. We threw Janelle Monae’s “Tightrope’ at it, figuring its pitter-patter would beat the eight-times-slower filter it ran the song through. But Monae was no match. The app bent her vocals into a black hole, making them cry out from whatever galaxy they had been sucked into. It’s the kind of sound that has to be heard for yourself, since our prose, no matter how purple, can’t truly evoke it.PRICE: Free
Is there any container that can’t be made into a speaker? First an Altoid tin, now a jerry can. Their sound is surely better than you imagine possible out of a jerry can, but should be bought for the novelty alone. Assuming, that is, you can meet the lofty price tag. (Artisanal recycling is very expensive.) After all, how can you throw that Boho-Hobo theme party next weekend without these in the corner?PRICE: 285 pounds, so just about $468. No biggie.
Have you, like seemingly every other smartphone photographer, become obsessed with making your digital photography look like a picture of Barbie and friends? If so, ditch the digital tilt-shift effect and do it the old-fashioned way. Usually you need an expensive lens to get the authentic tilt-shift effect, but this point-and-shoot from the ever-obsessive people at Photojojo lets you do it on the cheap, albeit the so-cheap-it’s-going-to-look-artsy. The camera comes with a lens that’s set at an angle so your picture loses its traditional depth of field. And since the camera can film video, you can make your very own life-size sequel to Marwencol.PRICE: $149
Has the Internet been more helpful to any ink-stained wretch than Roger Ebert? Ebert, the Pulitzer-winning movie critic whose thyroid cancer ultimately made him speechless, has written eloquently about the opportunities the Internet affords someone who is otherwise isolated. And with all this new outreach has come new attention to his oeuvre, hundreds of reviews of clunkers and Oscar-winners from the past 40-plus years. Now those pieces are collected in an app that serves as a kind of companion for all those movies you forgot were in your Netflix queue. Speaking of, the app’s greatest feature is its integration with your Netflix queue, allowing you to have Ebert decide the next year of DVDs you’ll get in the mail. Eat those cultural vegetables!PRICE: $1.
The last time Vulture Bytes was required to use a binder, we were using translucent purple iMacs, not iPads. This iPad sleeve is nothing you couldn’t do to the one you’ve already bought, since it’s a regular sleeve with a three-hole punch run through the border. But who has a three-hole punch anymore? For those who still do use binders — and the dozens of empty three-rings in our parents’ basement suggest there are some who still do — this makes a nice organizational tool, locking your tablet next to whatever work docs are too antiquated to get digitized. Or, if it’s not right for you, buy it as a gift for the 12-year-old who didn’t know computers used to be shaped like a microwave oven.PRICE: $35, with shipping and handling

Vulture Bytes: The Ebert App and an iPad Trapper Keeper