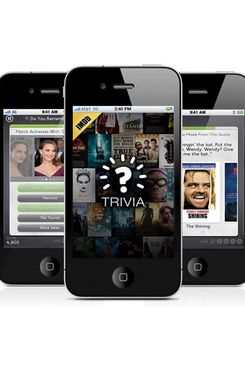 This week: an IMDb app to settle all casting debates, new Kindles, Wookies, and a lot of new music.

Almost every weekend that goes by includes a heated debate between Vulture Bytes and a friend about Hollywood arcana. Was Albert Brooks in Titanic? (No.) Didn’t January Jones have a bit part in Love, Actually? (Yes.) And that Nicolas Cage is everywhere, what’s the most number of movies he’s made in a single year? (four, in 2007, 2009, and 2011). But these debates require going out and socializing — something we’re always looking for an excuse to cut out of our life. Judging by its new trivia app, IMDb is sensitive to our needs. Play alone or with friends, but don’t expect the debates to last as long as they do at the bar. IMDb knows all. PRICE: Free
Jeff Bezos, doing his best Steve Jobs impression, unveiled three new Kindles earlier this week. One, the Kindle Fire, is nothing like the Kindle you’re used to. It’s a full-color tablet, a little bigger than the size of your hand, and able to display and play books, magazines, games, apps, etc. It’s like the Nook Color, but more fully featured. Then there’s also the Kindle Touch, a really cheap Kindle that doesn’t have any buttons, and the Kindle classic, an even cheaper one for those who still want a tactile experience. It’s a new era for e-readers, a time when they’re so cheap you really don’t have an excuse not to own one anymore. PRICE: $199 for the Fire; $99 for the ad-supported Wi-Fi Touch; $79 for the ad-supported classic
Aarrrwwggghwaahh…That’s Wookie for “jump to hyperspace,” but you would’ve known that if you had already bought this book, a short little compendium for any parent trying to bring their kid up Jedi. It comes with a soundboard to help the padawans say ten different Wookie phrases. While not as hard to speak as Klingon — that’s an actual, fully-functioning language, after all — it’s best to start children early if they want to be fluent in time to put Wookie proficiency on their college application.PRICE: $11.53 on Amazon
Vulture Bytes can still remember the first time we discovered KCRW in iTunes’ web radio listings. We were in college then, used to NPR stations that were all news all the time. But here was KCRW, with a little news but a lot of music — and good music, too, the kind of stuff that was better than whatever we were “borrowing” from our roommates. Now KCRW has taken its refined taste to the iPad, where its Music Mine is a discovery app for people who always want more NPR music. That means a lot of indie, a little international, and a touch of jazz — the kind of music that you want to play while you’re cooking. So plug in that iPad, and let KCRW cue up the playlist. PRICE: Free
If your politics mean you boycott all things NPR, try Band of the Day. It’s like KCRW’s app, but a little more obscure and a lot less federally funded. It doesn’t want to just give you new music to listen to, it wants to give you new music to learn about. It posts Q&As and short bios with the bands it features, along with a few tracks to stream and judge at will. The twist: This is actually a subscription service — you’ll get 1,500 songs a year, but it’s going to cost you $12. Somebody has to do the discovering, after all. PRICE: Free for the first week, $1 per month after that